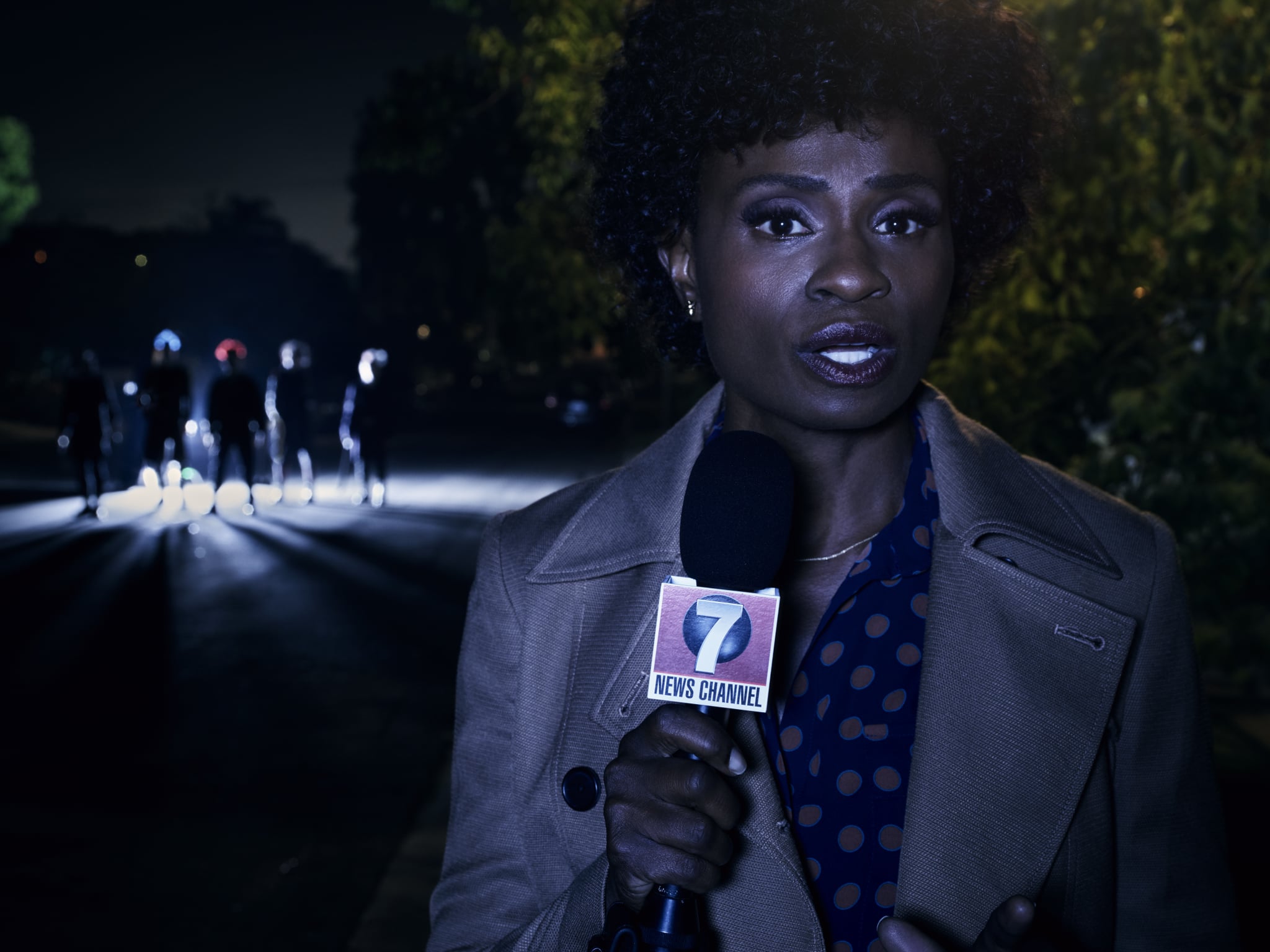 The new season of American Horror Story has arrived, and it's brought with it enough scary clowns to fill up a rusty ice cream truck. Throughout episode one of Cult, Sarah Paulson's Ally is given one garish-masked reason after another for her severe coulrophobia to leave her paralyzed by fear. But are the clowns Ally sees real or are they all just in her head? Her wife, Ivy, seems to think Ally is losing touch with reality in the aftermath of the election, but there is evidence to suggest that Ally may be one of the sanest characters of the season. However, this is AHS, so there's no such thing as simple answers. That leaves us with no choice but to use context clues to figure out which — if any — of those killer clowns are real.

It could be telling that the episode's first glimpse of a clown looks real, but is soon revealed to be nothing more than the vivid imagination of Ally and Ivy's son, Ozzy, working overtime. While the scene of two young lovers' tryst being interrupted by the AHS: Freak Show scene-stealer appears to be all too real at first, the show pulls back to reveal Ozzy reading a comic with a flashlight under his blankets. Right away, Ozzy's ability to get lost in fantasies is established, which makes him just as unreliable of a narrator as his mother.

Speaking of Ally, the next clown sighting is so perfectly calculated, it's hard not to suspect it could all be in her head.

Real or not, the scene featuring a posse of menacing supermarket clowns terrorizing Ally ranks among the scariest moments in AHS history . . . well, it does if you find those creepy masks as unsettling as Ally does. Scary though it is, the supermarket scene is immediately suspect. Later in the hour, Kai appears to be the ringleader of this gaggle of masked chaos seekers, but why would they specifically target Ally?

At this stage, there's no way for Kai to know who Ally is or that she suffers from a clown phobia . . . unless he's been researching her and her family for some reason. Given that he seems to send Winter to their home, that's a definite possibility. Still, the mayhem in the store is so specifically designed to trigger Ally's fears that it either has to be in her head or it had to be premeditated. That means that the "Make America Great Again" cap-wearing cashier is in on the plot as well, because by the time the cops arrive, there's no footage of the clown debauchery to be found. (Although, apparently, there's no shortage of evidence showcasing Ally's wine bottle-throwing skills.)

Having the scene come so soon after Ally discovers Ozzy reading a Twisty comic only adds to the evidence that it's in her head. Unless Kai has a very specific reason to target Ally this early in the game, this scene is most likely the stuff of waking nightmares.

#AHSCult my brain trying to decipher if the clowns are real or not pic.twitter.com/fOaJxFuKfG

Of all of the episode's clown scenes, this one is the most crucial in establishing whether this is all playing out in Ally's head or is part of a larger plot against her. Ally and Ivy appear to be the only people in the restaurant when Ally sees the clown, and its appearance only occurs after she scrolls through Donald Trump's Twitter feed. Since this season is supposed to be free of supernatural elements, the clown in question would need access to the restaurant, and they would have no choice but to risk being seen by Ivy when they switched out the dinner plates. Unless the horror show on Ally's dinner plate is a manifestation of her phobia of holes, and only the clown is real.

To Ally's credit, Kai is insinuated in her life at this point, even though she doesn't realize it yet. He throws coffee on Ally and Ivy on the street, and he already has Winter installed in the house as Ozzy's babysitter. This makes it far more plausible that he knows what triggers Ally at this point and is sending his minions to frighten her — and make her look insane in front of Ivy.

The Clowns Next Door

"There is nothing more dangerous in this world than a humiliated man," Kai tells the councilman who dismisses his pleas for the city to let fear take hold of their community. Later, that same councilman and his wife, who are friends of Ally and Ivy's, are brutally murdered in their home by a gang of clowns wearing the same masks as the ones who terrorized Ally in the store. Only this time, it's Ozzy who witnesses the violence, and not his mom.

Of course, Winter tells Ozzy's parents that she never took him next door to witness a couple of murders. And Ivy is quick to suggest the boy's night terrors could be to blame. That's a plausible enough explanation, especially since Winter had just taken the poor kid on a tour of the dark web before bedtime, but there's one flaw in the whole "Ozzy's imagination is running away with him" excuse: his mom never describes the masks she saw to him.

These clowns are not wearing generic masks; one of them has three faces with grotesquely long noses. Could the power of suggestion truly make a mother and son both conjure up the same specific masks? Or is AHS: Cult simply using the same masks to throw fans off? It's possible that Ally's and Ozzy's fears are hiding the season's true villain. But it's just as likely that Kai has chosen clowns as his agents of chaos specifically to get to Ally, and the most unsettling part is how well his tactics are working so far.

HOLD UP IF THE LIL BOY ALSO SAW THE CLOWNS, ARE THEY REAL??? #AHSCult pic.twitter.com/nyuLF61OR4

The final clown of the night simply cannot be real. Much like Ozzy's Twisty fantasy, the image of Ally in bed with her worst nightmare comes far too early in the season to be anything other than a red herring. Of course, that calls into question the reliability of Ally and Ozzy all over again. If the first and last clown sightings of the episode are both in the minds of the characters, then it's only natural to wonder how much of what they see can be believed.

Clowns became a symbol of the collective fear that seemed to grip the United States in 2016, and as sightings spread, the hysteria grew. AHS creator Ryan Murphy is surely playing up the current-events angle in a season that's aim is to portray the mixture of politics and panic that is playing out in the real world. With this in mind, it's entirely possible that Ally and Ozzy are feeding off of each other's fears and the season's true villain is still waiting to show itself.

AHS: Cult is grounding its story in paranoia so far, and as long as two of our main characters can't trust their eyes, neither can we.