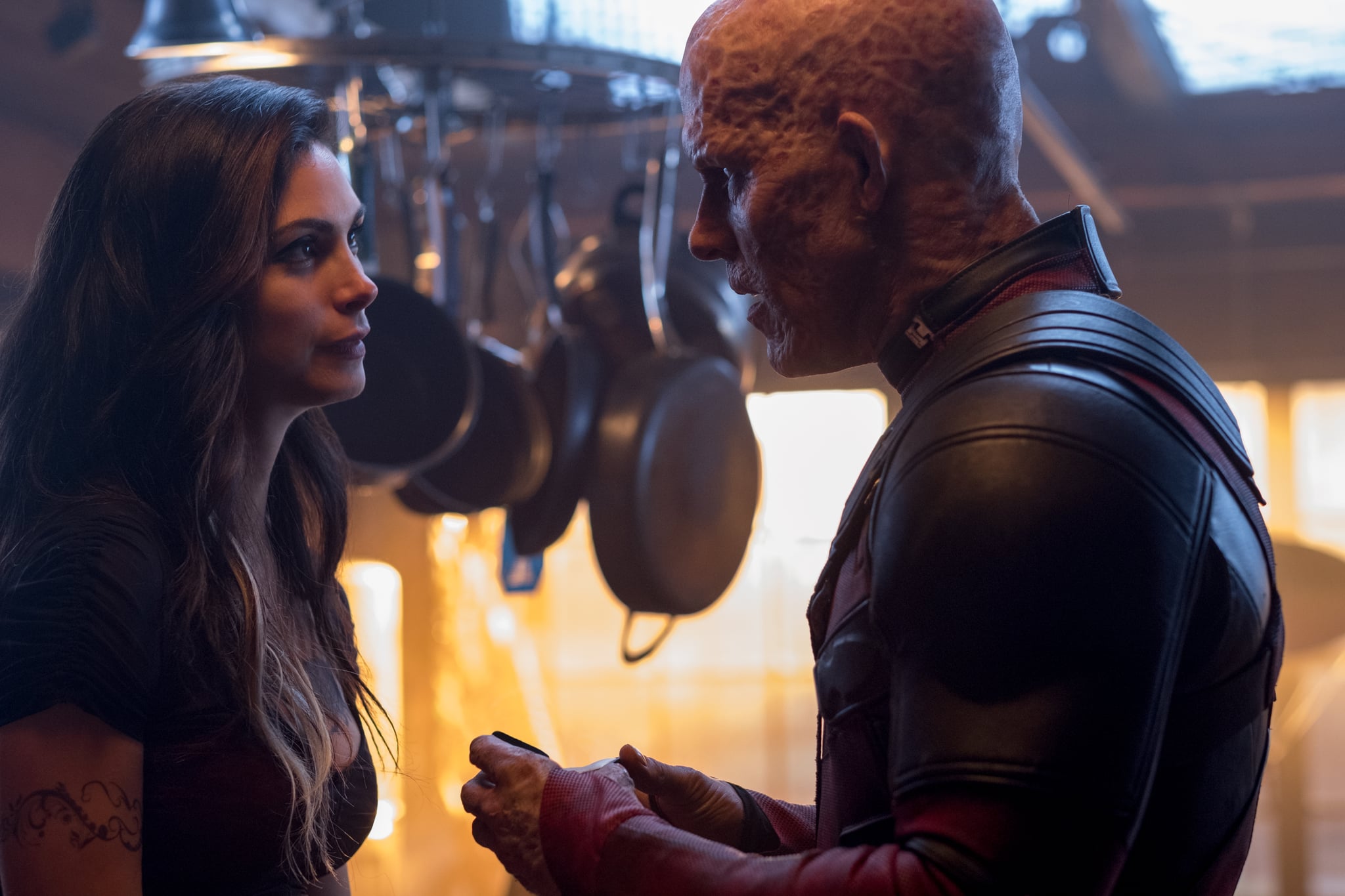 Show of hands: who here would like to make out with Ryan Reynolds? Like, if Blake Lively gave you and her husband a hall pass, and there were no repercussions, just a good ole smooch — would you do it? We'll go ahead and assume everyone's hands just shot in the air. But would you still make out with him if he's in costume as the disfigured and bald Deadpool? Yes? Well, we have a little preview of what you can expect, courtesy of Reynolds's Deadpool 2 costar Morena Baccarin.

In a recent conversation with the actress, who portrays Wade Wilson's rebellious girlfriend, Vanessa, in the Celion Dion-packed sequel, she told POPSUGAR that making out with Reynolds under all of the makeup and prosthetics was like kissing a "massive latex condom." Sounds . . . interesting?

"He smells like rubber the whole movie," Baccarin explained during our interview. "He's like sweating in latex through the entire film. It's like kissing a combination of a pizza pie and a condom, if that makes any sense."

If you haven't seen the first film, Deadpool, Wade (Reynolds) is diagnosed with terminal cancer shortly after proposing to Vanessa. Desperate to cure his disease, he undergoes an extremely dangerous and experimental procedure that leaves him cancer-free but with mutant powers and serious burn scars all over his body. Although he's worried Vanessa won't accept his new appearance, it soon becomes clear that nothing can prevent her intense attraction to him — not even a face that "looks like an avocado had sex with an older, more disgusting avocado."

The sequel picks up where the couple left off: crazy-passionate about each other, regardless of Wade's appearance. While acting alongside a makeup-clad Reynolds was sometimes challenging for Baccarin — "It was tough to see through all of that with the person you're acting with" — she did acknowledge that the couple's disregard for Wade's appearance is what makes their love so pure.

"It speaks to the love that these characters have for each other," Baccarin explained. "It isn't about looks. Yeah, they're both attractive, they're both into each other, but it goes beyond external qualities."

While Wade and Vanessa may seem like two love-struck teenagers, their relationship breaks away from the typical romance mold you see in superhero movies. With a juicy, and sometimes hilarious, sex life and little regard for what people think of them, Wade and Vanessa are anything but your typical Superman and Lois Lane dynamic. It's hard not to envy what they have.

"They're honest with themselves and each other," Baccarin said. Honesty and passionate sex? Kind of makes up for the latex condom-like lips.

Jesse Williams
We May Be Saying Goodbye to Jackson Avery, but Here's Where to Watch Jesse Williams Next
by Monica Sisavat 19 hours ago