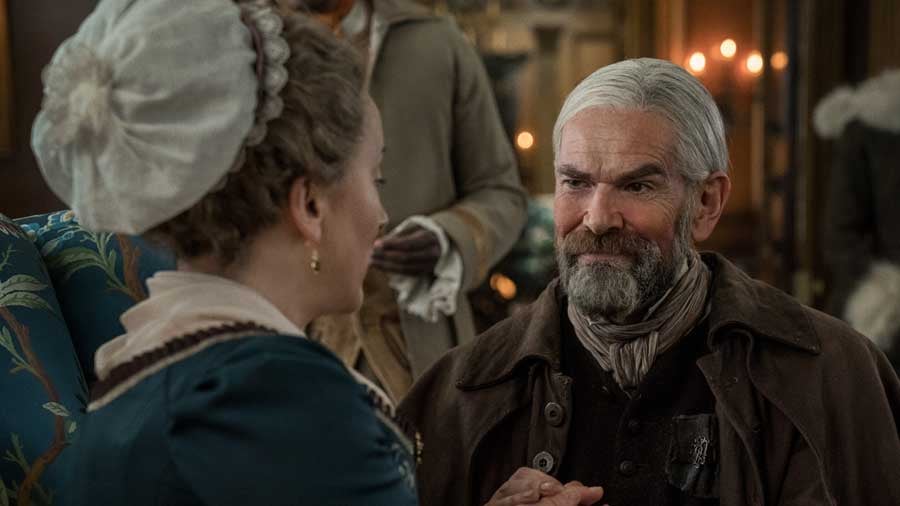 The Outlander writers threw quite a curveball at viewers in the season four finale, titled "Man of Worth," when a rather surprising hookup took place — one that had book readers gasping in delight. Read on to find out what's next for this new couple, but be warned of spoilers if you haven't yet watched the episode.

In the finale, while Jamie (Sam Heughan) and Claire (Caitriona Balfe) are busy rescuing Roger (Richard Rankin), and Brianna (Sophie Skelton) is occupied with, you know, having a baby and all, Murtagh (Duncan Lacroix) and Jocasta (Maria Doyle Kennedy) find themselves arguing about the state of the American colonies as controlled by the British . . . and suddenly they're sleeping together!

Ever since it was revealed that Murtagh was alive and well (and didn't die at Culloden, as the character does in the books), fans have speculated about the part he'll play in the series moving forward. A large contingent of them have theorized that Murtagh would take the place of Duncan Innes, a man who in the book marries Jocasta in large part so that other would-be suitors with less-than-upstanding intentions stop sniffing around her fortune.

But executive producer Toni Graphia told POPSUGAR that the Murtagh-Jocasta romance is not simply a case of one character replacing another.

Related:
How the Ridiculously Beautiful Outlander Cast Looks In and Out of Costume

"Our decision to keep Murtagh alive because we love that character so much says in and of itself that he deserves his own story and he's not just here to replace another character," Graphia explained. "He's going to have his own story and his own arc that plays out with Jocasta and there are some surprises there, I would say. It's not as formulaic as he is just going to take someone's place."

However, she did reveal that originally the romance was going to be more of a slow-burn, until they were writing the finale and decided the two fiery characters just needed to go for it. 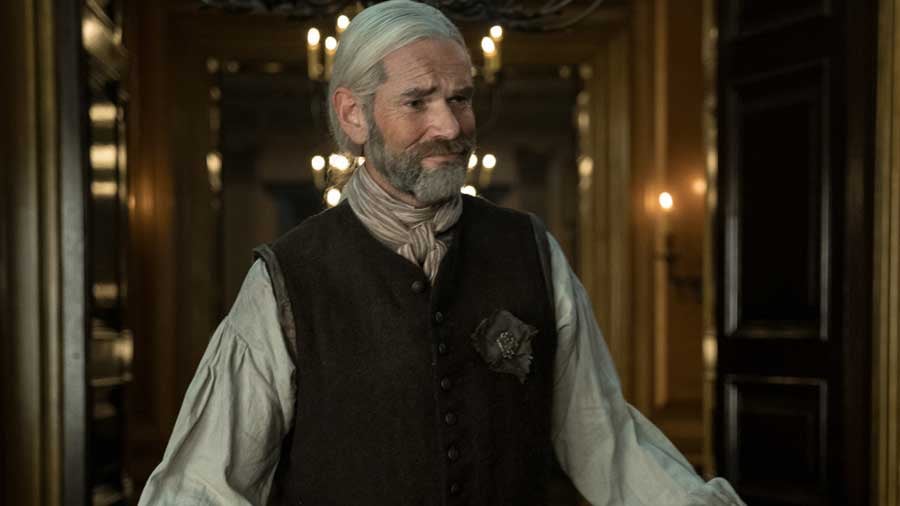 "We always talked about getting them together because we felt that even though that's not something from the books, it would be very organic," Graphia said. "Murtagh was in love with [Jamie's mother] Ellen and it was unrequited love, he never got to have her. Even though he got to have Jamie, he got a godson out of it, he's never even had a marriage or a relationship. He's always been this kind of roguish character, but in our minds, we've always thought from the beginning it would be really cool if Jocasta had a little crush on him all along, but had to watch from the sidelines because he was in love with her sister."

Related:
Why Murtagh's Big Return to Outlander Actually Poses a Threat to Jamie

Graphia added that they always imagined Murtagh and Jocasta being more "right" for each other but also having a very contentious relationship.

"They're more like oil and water — they were very spicy and spirited and had a very turbulent relationship. But in the end, they have a huge respect for each other and are drawn to each other," Graphia said. "We had planned to do a more slow roll-out, where he hangs out at River Run and it happens slowly. But when I was working on the finale, I talked about it with [fellow EPs] Matt Roberts and with Maril Davis and we just kind of decided you know what? Let's just put 'em in bed. Let's just get 'em together, let's just make this happen! We knew it would be a surprise to everyone." 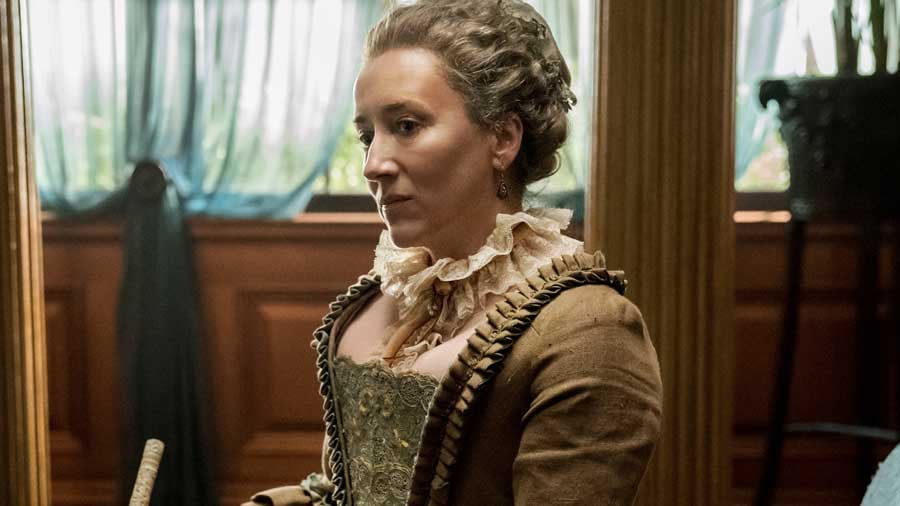 Graphia also revealed that she almost jokingly said to the writers' room that she imagined the two fighting and Jocasta throwing whiskey in his face and then boom, they're in bed together — and everyone loved that idea so much, that's what they went with.

"They're just not the sentimental type, those two. So I said the only way I could get 'em in bed is they have a fight and maybe she like throws a whiskey in his face and then we just cut to they're in bed and everyone's like, 'Yeah, that's the way to do it!'" Graphia said with a laugh. "I was just kind of throwing that out there, as how I would imagine it, and everyone's like, 'Let's just play it that way, let's do exactly that.' So that's the way we did it and that's the only way I would believe it. Neither one of them is sentimental and slow-moving, it's not a normal courtship. It's just sparks."

Related:
Outlander: What You Need to Know About Aunt Jocasta

And if you're afraid the Murtagh-Jocasta relationship is just a one-time deal, don't worry — the show has a lot more in store for this new couple.

"I can't wait for you guys to see where we're going with that relationship. We definitely kicked it off with a good start and you'll have to check in on season five to see where it goes. We have some interesting stuff planned," Graphia teased, adding that "there's actually another scene with them that didn't make it in the cut that is going to be on the DVD, in the bonus features on the DVD. So there's a little bit more with them. They were wonderful together. They have a really cool chemistry, those two actors. We love them."