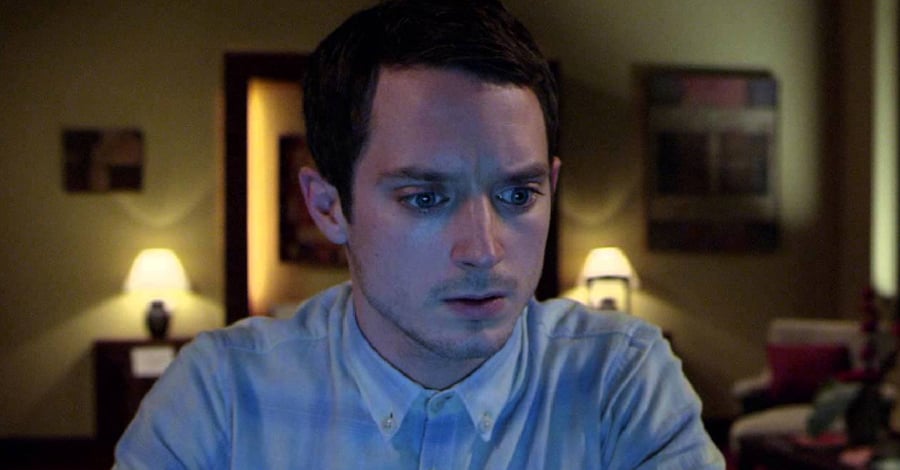 Open Windows, Nacho Vigalondo's new movie starring Elijah Wood, is a style of film you've never quite seen before. It follows Nick Chambers (Wood), a young man who believes he's won a dinner date with his favorite female star, Jill Goddard (Sasha Grey). He quickly learns that the contest has been canceled and finds himself sucked into a dark digital world that causes his to question his own morals. The subsequent twists and turns include kidnapping, blackmail, and even murder. We had a chance to chat with Wood about the film, from the alternative filming style to the unsettling real-life connections. Keep scrolling to find out what we learned, and watch the madness yourself: Open Windows is on demand on Oct. 2, and it hits theaters Nov. 7.

The film comes at a timely moment, just weeks after the massive iCloud hack that resulted in leaked pictures of a large group of female celebrities. While the film's version of a "leak" is much more escalated, the correlation is undeniable. I asked Wood about the timing in relation to the hack, and he told me it's about much more than that. He said, "I think, because of the Internet, this movie would always be relevant. It deals with that lack of accountability for the choices that we make online. Hopefully it creates a much larger discourse about the way that we conduct ourselves on the Internet."

The entire film, from start to finish, takes place on a computer screen. It may be hard to imagine, but the camera takes the viewer in and out of open windows, mostly camera feeds, using the desktop as a way of telling the story. I asked Wood if this made the viewer experience more compelling, and he replied, "Making a movie that is from this perspective, to which we can all relate, can potentially create a more immersive experience. But I think what I found fascinating about it was just simply the challenge of taking something that is only on a computer screen and being able to work beyond it, to where the story comes into reality. I think that the greatest achievement of the movie is that when you watch it, you actually forget that it's on a computer screen. The danger, obviously, is if you watch the film and you kind of never forget the fact that it's on a computer screen. That means that's what's drawing your attention, rather than the story itself. I think, as does Nacho, the challenge is how to move beyond a computer."

3. The alternative filming style came with its own set of challenges.

Given the intriguing stylistic choice to present the entire film on a computer screen, there were certainly a few roadblocks along the way. Wood explained: "In the movie, the database and even the OS, the operating system on this particular laptop, were completely created from scratch, and that was hugely complicated. One of the things that was really interesting too — and I didn't even realize this until they were in post production — you know, obviously, the movie doesn't incorporate traditional edits. The roaming, independent cameras that moved to different parts of the screen, they show you want they want you to see. There's not a single cut in the film. When Nacho would want to make changes, because it was all created to look like a computer, they would have to rerender the entire sequence! Editing choices were really complicated."

I asked Elijah to comment further about this sort of dark side we have when it comes to Internet behavior, and he said, "You know, there's a moment in the movie that I think all of us could relate to where Chord [one of the characters in the film] messages me a link and says 'open this link.' He clicks the link and realizes that he suddenly has access to this actress's cell phone account. He can spy on her. He's done something that, in the light, if he were faced with the same thing, it's something he wouldn't do. I think that's the interesting thing about the Internet; it's always that element of that most of our identities are anonymous, and therefore if we're anonymous, we're more apt to do things that we would normally not do in life, and there's this sort of weird, gray morality which unfortunately manifests in ways that actually, genuinely affect people in real-life realms."

5. The film shows a darker side of celebrity culture, too.

Open Windows shines a light on a frightening aspect of celebrity enthusiasts and how far fans are sometimes willing to take their obsessions. I wondered if Wood might have had similar struggles, and when I asked if he related to Jill, he said, "Not entirely. None of us have full control over our anonymity in regards to being online because of how much we share and how much we're connected to social media. Being someone who works in film, you're in the public eye a little more, so I'm certainly used to that. But not to this level, I mean I couldn't relate so much to that. I don't feel like I've ever had to deal with that level of attention. As someone who is in the public eye to a certain degree, the world has changed where everyone has a camera now, and everyone has the ability to share anything in the online space. I came from a world where we didn't have that and now we do, and you just sort of start to accept that as the reality of the world that we live in now."