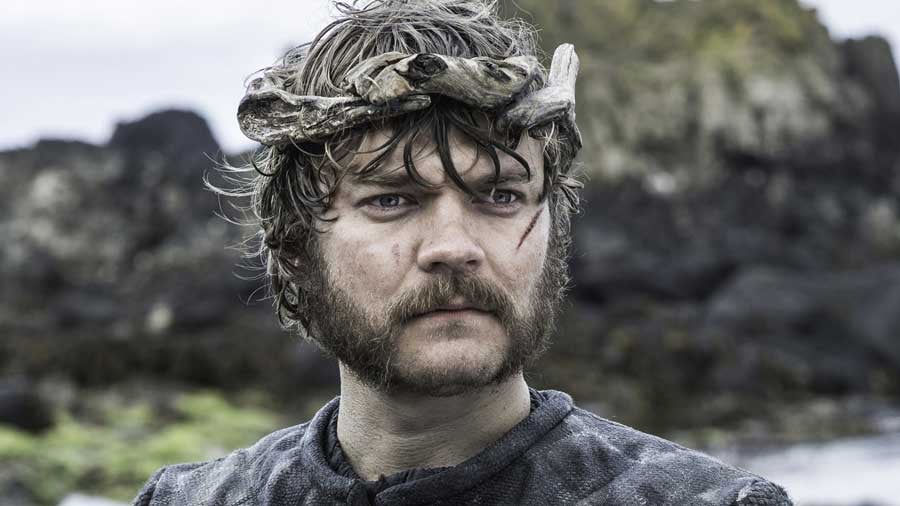 The Game of Thrones books contain so many characters and plotlines that a great many have been truncated, combined, or even left out of the HBO fantasy series altogether. One character who appears in A Feast For Crows and A Dance With Dragons finally joins in at the end of season six, and we have a theory about how important he is going to be in season seven.

In two season six episodes, "Home" and "The Door," Euron Greyjoy returns to the Iron Islands with a splash, throwing his older brother, King Balon, off a bridge so that he may claim the Salt Throne for himself. Euron is challenged in a Kingsmoot by his niece, Yara, ultimately defeating her and announcing his intention to sail for Slaver's Bay to offer Daenerys a fleet of ships (and also his company. . . though fans are rooting for Dany to get together with Jon Snow) in order to help her sail for Westeros and claim the Iron Throne.

Related:
Why Daenerys Is the Key to the Next Monumental Battle on Game of Thrones

In the books, Balon's death and Euron's taking of the Salt Throne happen much earlier on in the action than in the TV series, with the Kingsmoot taking place when youngest brother Aeron Greyjoy calls for it after becoming suspicious that Euron murdered Balon. Despite the rumors of fratricide, Euron emerges victorious here as well, dispatching younger brother Victarion to deliver the Iron Fleet to Daenerys.

When Victarion leaves, Euron gives him a dragon horn called Dragonbinder, a six-foot artifact that Euron claims to have found in Old Valyria. It is covered with Valyrian glyphs, which glow red and then white when the horn is sounded, an action that also kills the person performing it. Euron also claims that sounding the horn will bend dragons to his will.

Lending a little more credence to this theory is the fact that in the World of Ice and Fire app, it is revealed that Dragonbinder was actually stolen by Euron from a group of warlocks. Now, the app isn't exactly book canon, but it was developed in conjuncture with author George R.R. Martin, so it is a reputable source.

The reason this is important is because in A Dance With Dragons, Daenerys herself mentions that Valyrian dragonlords used horns to control their dragons. "The dragonlords of old Valyria had controlled their mounts with binding spells and sorcerous horns. Daenerys made do with a word and a whip," the book reads.

So perhaps Euron has himself a magical horn that really does let him control dragons. If this is the case, might the show be gearing up for a Daenerys/Euron showdown wherein he tries to take control of her dragons?

Related:
You Guys — The Key to Daenerys's Future on Game of Thrones Is in Her Costume

When we last see Dany, she is sailing for Westeros on ships provided by Yara and Theon rather than Euron's fleet. When he eventually catches up with her, he may be able to turn her own dragons against her, something which could prove extremely problematic for Dany out on the open ocean. Sure, her ships can presumably fire on enemies, but Dany's strength lies in her foot soldiers and dragons.

Even if the encounter happens on land, that is still Daenerys's worst nightmare, as her dragons are basically her children and their relationship grew even stronger in season six. What will she do if she loses control of her beloved babies?

So our theory is that while the denizens of the North are busy fending off the impending White Walker invasion and Cersei is readying to do battle with Ellaria and Olenna from Dorne, Daenerys may have her hands full with the new King of the Iron Islands.