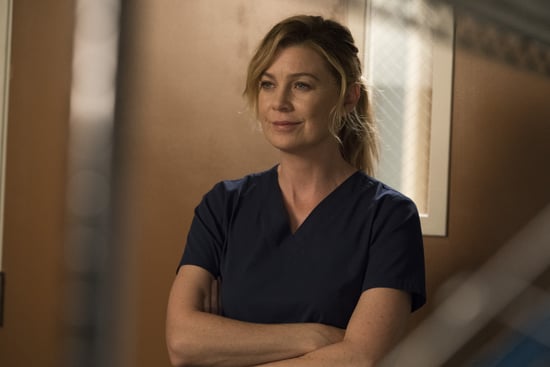 If you enjoyed the easy chemistry between Meredith Grey and Andy Herrera in the Grey's Anatomy and Station 19 crossover episode, you're about to get more of it in the upcoming Station 19 premiere. Yup, Grey Sloan's dark and twisty Harper Avery winner makes a fairly emotional appearance in the pilot of Shondaland's new firefighting drama.

In the official promo teaser, Meredith hears that Andy's father is at Grey Sloan. The surgeon leads a profusely sobbing Andy into a supply closet to offer some consolation and then later tells her, "OK, that's enough. Now put your game face on." We're totally not crying over Meredith's big-sister vibes.

Meredith fans will love Station 19's spunky, tough heroine. Like Meredith, Andy is relentlessly brave and also very good at her job. She also experiences a sense of obligation to her father, who is a firefighter chief, as Meredith undergoes with Ellis Grey, who was an incredible surgeon at the height of her career. In an interview with TV Guide, Jaina Lee Ortiz, who plays Andy, chatted about the similarities between the two leading ladies.

"I think they have similar backgrounds in how they were raised, their family situations. They both have the same drive, the same work ethic," she explained.

Meredith isn't the only Grey Sloan doctor who'll pop up in the show. In addition to Meredith, we'll also see Dr. Miranda Bailey, because of course, her husband, Ben, is one of the main characters.

"You know she's gotta go over there and mark her territory," Chandra Wilson, who plays Miranda, said in an interview following Miranda's season 14 heart attack scare. According to Wilson's IMDb page, she will appear in Station 19's official pilot episode, titled "Stuck." We don't anticipate that the couple will be bickering too much. It looks like Miranda has made her peace with her husband's career pivot after her near-death experience.

If Shondaland's new firefighting show makes it past the first season, we can expect to see more characters from Grey's on Station 19, just like how Grey's characters occasionally popped up on its first spinoff, Private Practice. We might have another television hit on our hands — Private Practice, after all, lasted for six seasons.