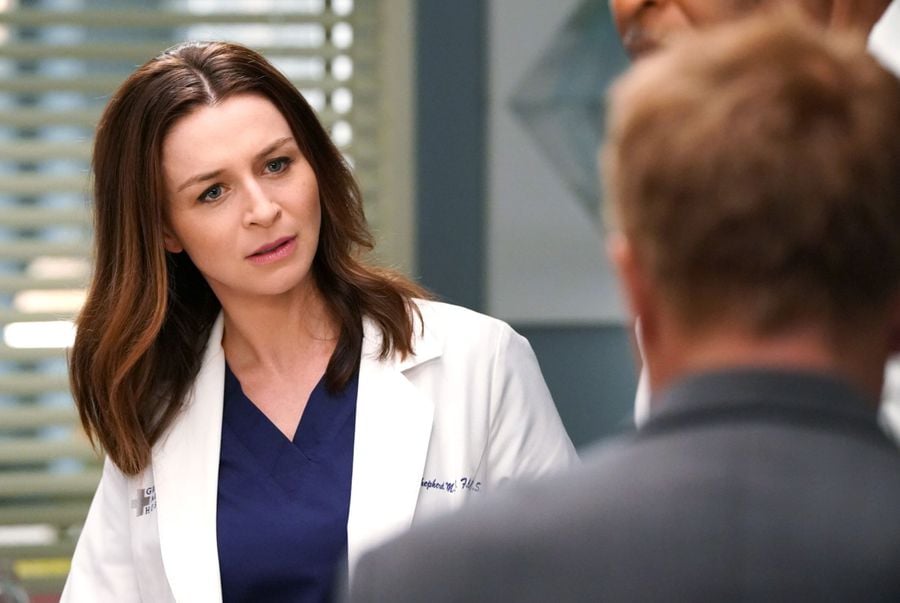 In an ironic and cruel reveal, we learn in season 14 of Grey's Anatomy that Amelia has had a tumor inside her head for quite some time. It's not even a baby tumor; it's a grapefruit-size tumor that's been in her brain for over a decade. But any Grey's fan will tell you that Amelia is not the first character to have a brain tumor.

In real life, tumors are scary. In the "anything goes" world of Grey's Anatomy, they're one of the many heartbreaking, repeated storylines that befall beloved characters. They act as catalysts that shape characters' behaviors and decisions. For a repeated plot, they still manage to provoke strong emotions. Here's a rundown of who's had a tumor on the show and how their tumor has shaped the series.

In the season one finale, Derek discovers a tumor on then-Chief of Surgery Richard Webber's optic nerve. It's a quiet but important revelation. The surgery, albeit successful, keeps him bedridden post-op for some time. This is the first time we see Richard, a figure of authority, in a vulnerable position. It helps us see the very macho power dynamics between Richard, Derek, and Burke. (Richard assigns Burke to be interim chief, irritated over Derek sleeping with an intern.) During this time, we're also introduced to Richard's wife, Adele, who visits him after his surgery. As the second season progresses, we learn more about Richard's wife and her role in a love triangle with her husband and Meredith's mother.

Thirteen seasons later, Richard uses this harrowing experience to connect with Amelia. But the neurosurgeon turns his story into fodder, joking that she could operate on his tumor while her tumor was being operated on.

In season five, Izzie senses that something is terribly wrong when she sees her dead fiancé. She eventually finds out that she has Stage IV melanoma and that her hallucinations are actually due to a brain tumor. Derek operates on her tumor. She wakes up with short-term memory loss, then flatlines as season five ends. Izzie survives into season six, but suddenly packs her bags and ditches Alex.

This sudden illness seems to stem from external showbiz drama between Izzie's actress and the showrunners. Katherine Heigl, who plays Izzie, had taken her name off from consideration for an Emmy nomination, saying that she wasn't given Emmy material for Grey's. Well, her tumor plot twist definitely feels very dramatic, if not arbitrary. Her departure from the show is not a venerable exit like Callie's or Derek's. It is quiet, quick, even undignified. Perhaps it is the price one pays for scorning Shondaland.

Geena Davis graces Grey's fans in season 11 as renowned fetal surgeon Nicole Herman.
Nicole's story arc lasts a little over half of season 11, during which she mentors Arizona. Though stern, Nicole sees something in Arizona and knows that the pediatric surgeon has the talent to break into the difficult field of fetal surgery. Amelia removes Nicole's brain tumor successfully, but the operation renders the fetal surgeon blind.

Nicole's story arc is basically a plot device that highlights the changes in Arizona's personal life. She comes in during a time when Arizona's marriage is in shambles, and Arizona is figuring out who she is outside of her relationship with Callie. Nicole is a tough, independent woman who stands alone, someone Arizona admires and cares for deeply. Ultimately, however, her run on the show is a short-lived and functional one.

When Amelia enters an MRI for an gynecological experiment, she learns that she has a brain tumor the size of a grapefruit. The tumor seemingly accounts for so many of Amelia's impulses — leaving LA for Seattle, running away from her wedding, giving her husband the cold shoulder, and taking on high-risk surgeries. Her arrogant, but highly competent, mentor successfully removes the tumor.

After the surgery, Amelia is left to wonder who exactly she is without the tumor. It's certainly disconcerting to assume that her entire identity is based on a tumor. It's unsettling to wonder whether her abrasiveness is a side effect of a tumor or emotional residue from complicated past traumas and addictions. To the credit of the show writers, the absence of the tumor gives Amelia an awareness to re-evaluate her relationships with her family and coworkers, particularly her rocky marriage.

The brain tumor plot has become a trope on Grey's Anatomy. We might become emotionally frustrated with its repeated uses, but it catches us off guard every time.

TV
Why Eboni K. Williams Joining The Real Housewives of New York Is a Huge Deal For Bravo
by Maya Richard-Craven 2 hours ago

Schitt's Creek
This Schitt's Creek Guess Who? Game Will Test Your Town Knowledge Like You're a Rose
by Karenna Meredith 5 hours ago

Dancing with the Stars
Derek Hough and Hayley Erbert's Paso Doble Is One of the Best DWTS Performances . . . Ever
by Kelsie Gibson 11 hours ago