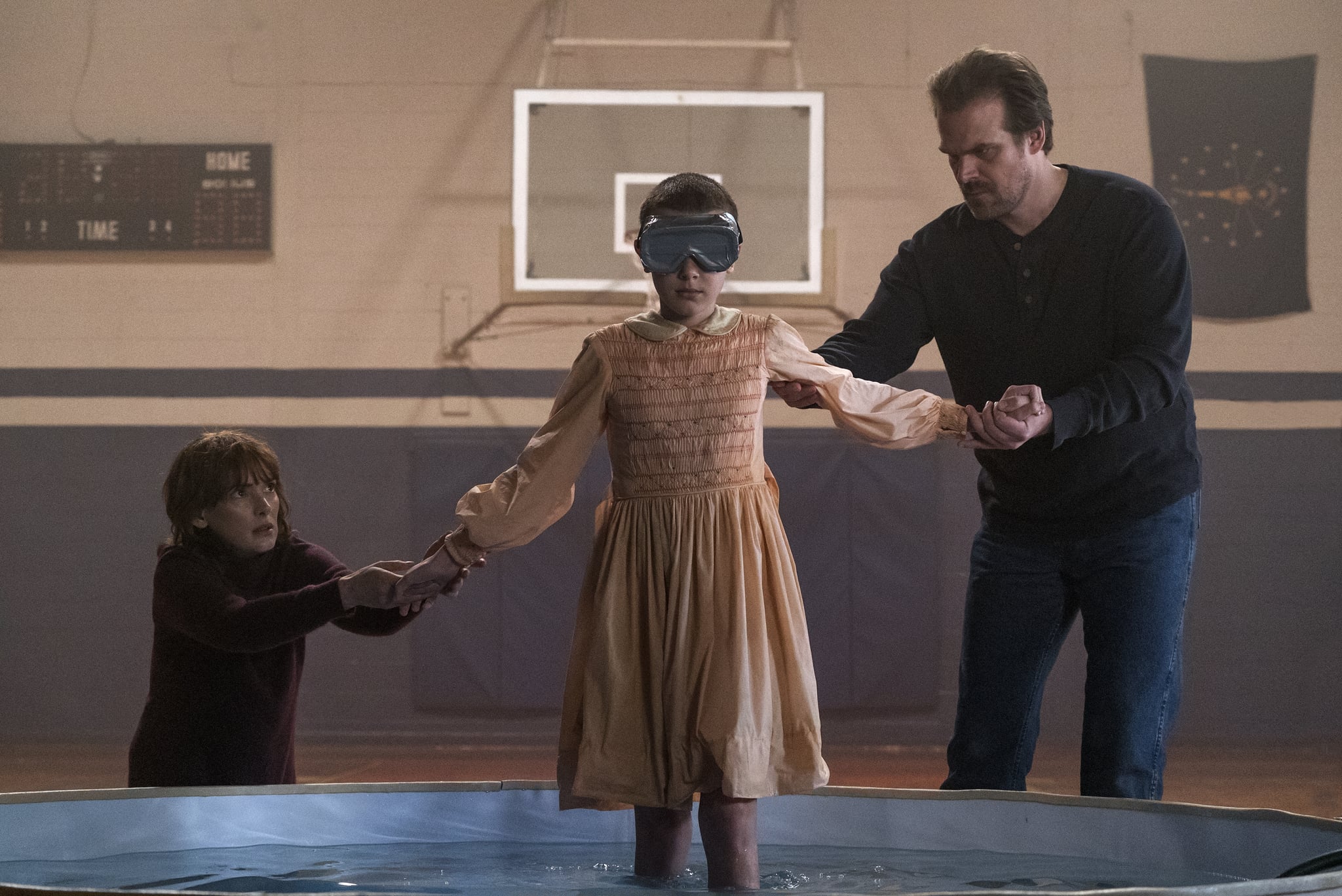 The premiere date for Stranger Things season two is getting closer by the day, which reminded us of one very important question: um, what happens at the end of season one, again? Listen, it's been a long time, and there are certain parts of the plot that we'd totally forgotten about. A whole lot of crazy sh*t happens, OK?! If you're in the same boat, don't worry — we went ahead and rounded up everything you need to know about the finale before the new season drops on Oct. 27.

Eleven Sees Will in the Upside Down

Eleven reveals that she can locate the missing Will Byers if she's in a sensory-deprivation tank, similar to the one the evil Dr. Brenner used to put her in inside the lab. The gang — Sheriff Hopper, Joyce, Mike, Dustin, and Lucas — rig one up in the Hawkins High school gym using anything they can find. The good news? Eleven is able to see where Will is. The bad news? Barb (remember how the Demogorgon got her?) is really, really dead (and it looks like her dead body is being used as a nest for the Demogorgon's eggs).

Related:
Everyone Calm Down — Stranger Things Season 2 Will Address the Barb Situation

Hopper and Joyce leave the kids to break into Hawkins Laboratory, while Jonathan and Nancy try to lure the Demogorgon to the Byers' house. Hopper and Joyce manage to get inside the Upside Down and save Will (he has a nasty tentacle down his throat but is otherwise unscathed). Nancy and Jonathan are joined at the Byers house by a remorseful Steve, and together the three booby trap every inch of the home. They manage to light the monster on fire, and it disappears — is it really dead?

A Showdown at the High School

Dr. Brenner and his army of gun-toting men show up to Hawkins High after Hopper and Joyce leave. Luckily Eleven makes quick work of most of them using her powers, but the skirmish takes a massive physical toll on her. The bloody remains of the guys Eleven killed attract the Demogorgon, who takes out the rest of the men and seemingly kills Brenner (there's never a shot of his dead body, though, so we can't be sure if he's truly dead). Eleven passes out from using too much of her powers, so the boys fight off the monster with Lucas's slingshot in the meantime. Right as it's about to eat them for dinner (or whatever it plans on doing with them), Eleven reawakens and uses the last of her powers to blow up the Demogorogon — and herself. Everyone is devastated.

Where Everyone Ends Up

Season one ends by flashing forward one month later. The boys, including a recovered Will, are once again playing Dungeons & Dragons in Mike's basement. Despite the chemistry between Nancy and Jonathan, she's gone back to dating Steve. Jonathan and Will are then seen having Christmas dinner with Joyce, but Will leaves to go to the bathroom. He looks at himself in the mirror, distraught, before coughing up a slug-like creature and briefly hallucinating that he's back in the Upside Down. Clearly the monsters aren't done with him yet.

Meanwhile, Hopper is seen putting on a brave face at his police station's Christmas party, but it's clear that he's still processing everything that happened. He leaves the party early to drop off a box of Eggos near a tree in the woods, which implies Eleven might be alive after all. Her survival is left ambiguous, but she's alive and (kinda) well in the season two trailer, so there's still hope!