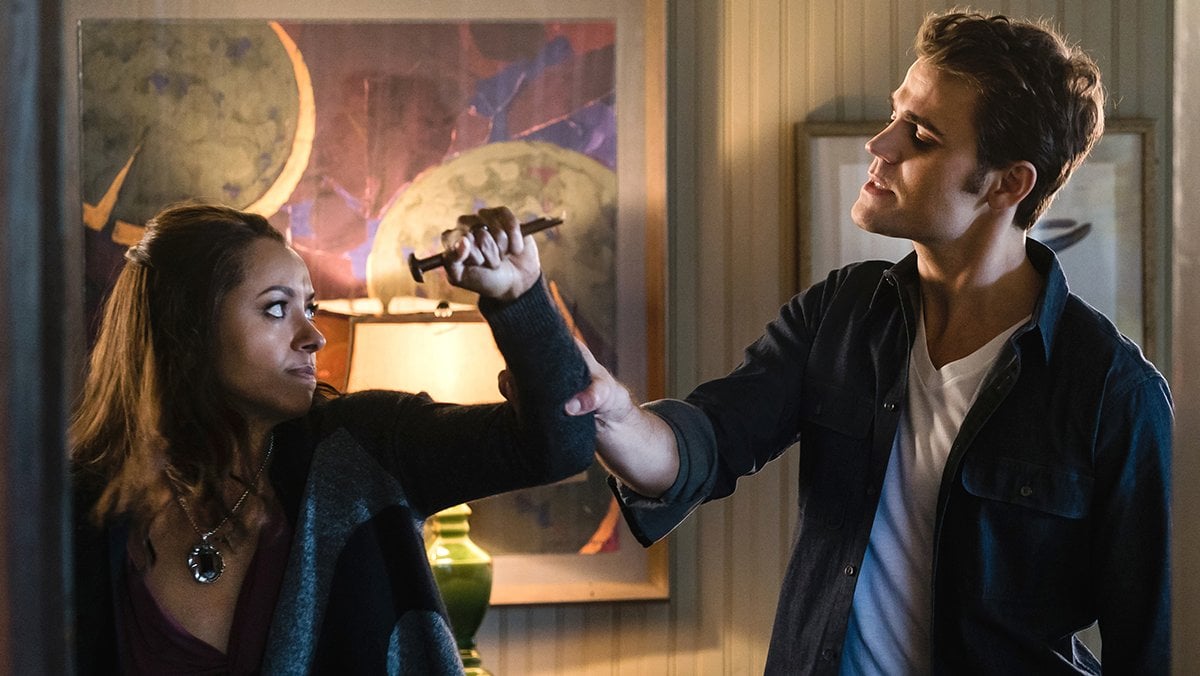 For the past eight seasons, The Vampire Diaries has been full of twists, but Friday night's episode might have been the most shocking. As Cade manages to make his way to Mystic Falls, all hell breaks loose (pun intended). To up the ante with his servants, Stefan and Damon, he gives them an ultimatum: kill your brother's girl or kill 100 strangers. The choice seems pretty simple for Damon as he would never break up Steroline, but unfortunately for humanity-less Stefan, that isn't the case. Yes, that's right, Stefan is going to kill Elena! Unwillingly, Bonnie agrees to help Damon and the rest of the gang kill the devil by taking a vial of Elena's blood so that they can inject him with the cure. It sounds like a safe plan, but just you wait.

While Damon thinks Elena's coffin is still tucked away in a warehouse in Brooklyn, NY, Stefan knows better — or perhaps Cade does. After running into Bonnie in Mystic Falls, he casually reads her mind and finds out that Bonnie actually moved Elena to a safe house in upstate New York. Smart of Bonnie, bad for Damon. Stefan proceeds to transfer ownership of Bonnie's house to someone else so that they can invite him in, all while Bonnie and Enzo dream about how they'll one day live there together as humans. Once Enzo is thrown out of the house, because he hasn't been invited in, the two know something is up. Bonnie quickly grabs a vial of Elena's blood, but when she returns to the door, it's too late. Stefan rips out Enzo's heart and casually walks into the house to finish off Bonnie.

The two wrestle with each other, before Bonnie makes a life-altering decision . . . literally. She gives Stefan the cure! (Not to brag, but we totally called this.) After Stefan passes out on the floor, Bonnie runs outside to find the love of her life completely desiccated on the front porch. Overcome with grief and anger, Bonnie lets out a bloodcurdling scream so powerful, it actually creates a force around her — kind of like when Cade created hell. Wait, did Bonnie just get her magic back, or was that something entirely different? Is the reason she's been so affected by the Maxwell bell because she's actually a descendant of Cade? Oh, this is about to get good.

Red Carpet
Shoniqua Shandai's Harlem NYC Premiere Look Is as Vibrant as Her Character Angie, Love to See It!
by Naledi Ushe 3 days ago