Even though we have three more long months before the release of the next Bond film, Spectre, people are already buzzing about who will sing the film's theme song. It's going to be tough to beat Adele's Oscar-winning song "Skyfall," but we're sure whoever lands the gig will do a spectacular job. Bond-tune buffs Adrian Daub and Charlie Kronengold list off their best guesses in this post originally featured on Oxford University Press's blog. 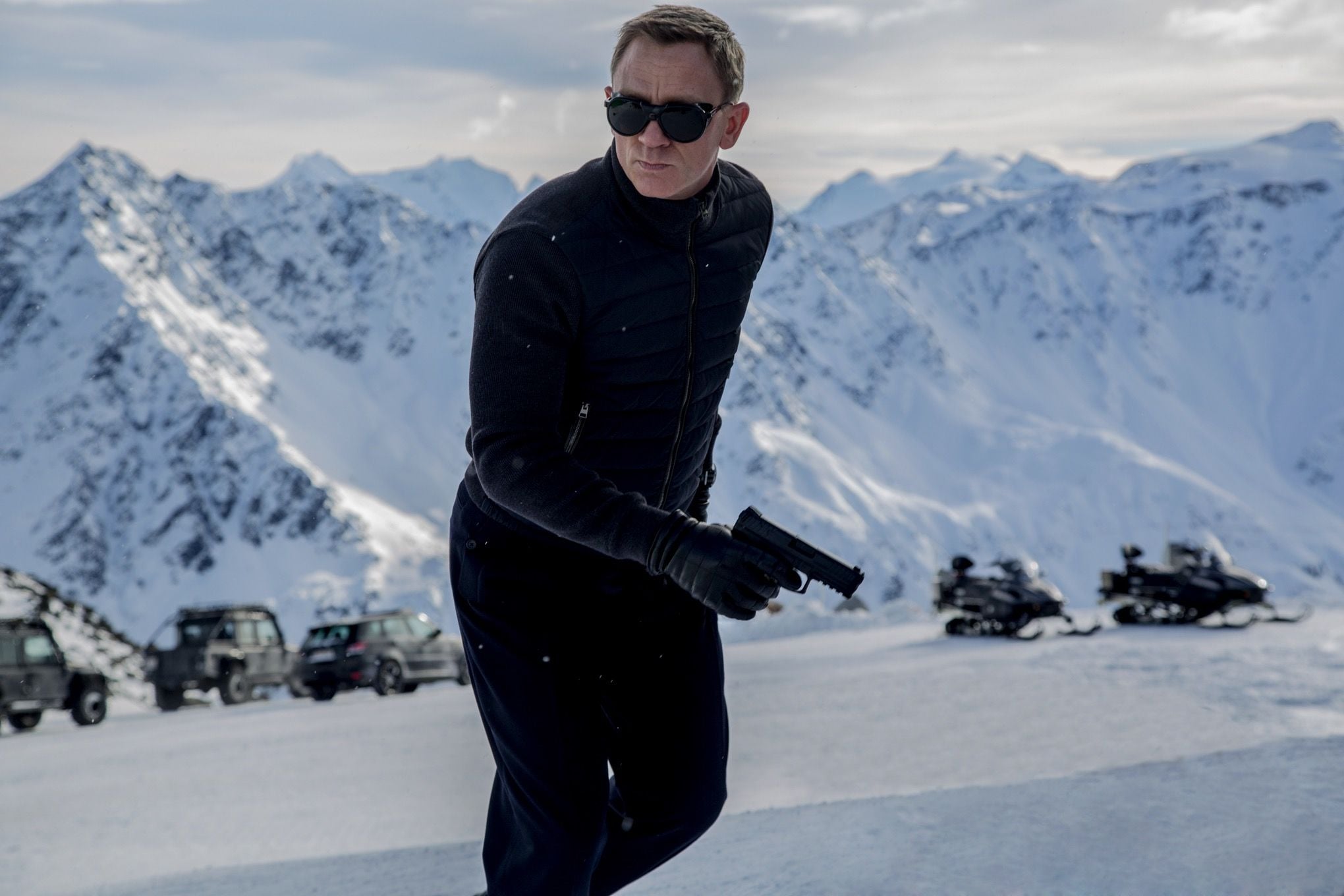 Now's the moment to be a fan of the Bond songs. Spectre, the new film, comes out this November. That means we'll hear an official unofficial leak of the title song sometime this Summer. Everybody's been guessing who the singer is. Twitter says it'll be Sam Smith or Lana Del Rey. Sam Smith says it isn't him and claims that he "heard Ellie Goulding was going to do it." The Telegraph wants to know why no one has considered Mumford & Sons (don't answer that). Even Vegas is paying attention. So, who would you put your money on?

For film-music nerds there has always been an added dimension to the announcement of the next Bond title (whether this happened in the end credits of the previous film, or in some big announcement, once the films ran out of Fleming novels to not really adapt). We now know there will probably be a song called "Spectre" by the Fall — unless producers decide the title is unsingable and decide to grant dispensation. (Rita Coolidge was spared having to sing a song called "Octopussy," for which she's likely pretty grateful.) Many others probably wondered, too: what kind of voice could belt out a word like "Spectre" and make it sound convincing, haunting, and appropriately Bond-esque?

Given how well (and successfully) Adele did this for "Skyfall," there's more riding on whether "Spectre" makes sense as a song than there was on previous songs. Surely the Bond producers feel some of that pressure. There are some recent choices that felt a bit phoned-in (Chris Cornell? Really?). Adele's "Skyfall" was a big part of that movie's identity; the expectations of "Spectre" will be huge.

So who will it be? We have our considered opinions as nerds who've just written a book about the James Bond songs. But luckily you won't have to rely on our considered opinions. Because bookies have done the same research that we have, and unlike us, they've got something riding on this. But all they can give you are odds. We'll explain them. So here is who it will be, who it could be, and who it should be. Ladies and gentlemen, place your bets.

A strong choice. Self-conscious '60s throwback? Check. Orchestral textures without too much of a beat? Check. Breathy chanteuse with a vague sense of menace? You betcha. So why won't it be her? Lana Del Rey broke an unwritten rule of Bond songs: don't write one on spec. There is a long history of artists sending in songs to the Bond producers hoping to get picked: Johnny Cash wrote a Tex-Mex "Thunderball," Alice Cooper wrote a "Man With the Golden Gun." None of them got picked. While Lana Del Rey didn't come out and say it, her most recent album contained a Bond song in all but name: "Shades of Cool." Thanks for playing, Lana.

Florence and the Machine

Specialists in big, orchestral, almost operatic sound, a strong female voice, and moody, often narrative lyrics — Florence and the Machine have the Bond sound even when not making a Bond song. Which may indeed be what might do them in. A lot of Bond acts were counterintuitive picks at the time. At least once we get beyond the stalwarts (Shirley Bassey, Tom Jones, and Dionne Warwick), you'll often catch yourself thinking: oh sh*t, XYZ did a Bond song? It seems like the producers intended that effect. If Florence and the Machine did a Bond song, it would be just like the one they did for that one movie with that girl from Twilight. And for that Game of Thrones trailer. And . . .

A strange choice at first blush, but that has more to do with the way we think of Bond songs than with the way they've actually been. We think menace, up-tempo. But there was a period when Bond songs sounded very different, and the question is whether Bond producers remember that time more fondly than we do. Listen to Carly Simon's "Nobody Does It Better" or Sheena Easton's "All Time High" and you'll be shocked that those were Bond songs. Fanboys griped that they lacked respect for the conventions of the genre, but here's the thing: consumers ate them up. A Sheeran ballad, downtempo and infused with decidedly vanilla sexuality, could tap into that: no Bond fan's favorite, but a record that sells. At the same time, who the hell still makes film songs hoping to sell records?

Five words: Girl With the Dragon Tattoo. The opening sequence to David Fincher's Stieg Larsson adaptation (also starring Daniel Craig) was a Bond title sequence done way, way better — disturbing, hallucinatory, visceral in all the ways that Bond sequences haven't been for decades. And through it all the rip-roaring Karen O cover of Led Zeppelin's "Immigrant Song." You bet the producers saw that sequence and thought: we need something like this to open a Bond film. But you bet the producers also saw the barely-breaking-even box-office receipts for Girl With the Dragon Tattoo. Why bring on Karen O (or Trent Reznor) when they've done a quasi-Bond, and it was widely perceived as a flop?

Wait, you say. Coldplay? In 2006 maybe, but now? Well, picking Adele for the last song was a canny move for the Bond producers, but traditionally the producers were not exactly known for capturing the musical zeitgeist. Usually by the time they got around to signing an artist for their next film, you could bet that that artist was already getting a bit stale. These are 50-year-olds with the aesthetic sensibilities of a 70-year-old picking songs for 20-year-olds — needless to say, it always goes great. Has your mom heard of Coldplay? Of course, at her Pilates class. At the same time, the decision to go with Adele for "Skyfall" was pretty clued in. If it's a sign the producers are wising up, Coldplay is probably (and mercifully) out.

There's precedent for electronica-based Bond songs; that's the good news. In our professional opinion, that precedent, Madonna's "Die Another Day," is one of the all-time greats. The bad news is that many felt different when the song came out. Critics liked it, but Bond fans were livid. So in handicapping Gaga, the question becomes: who gets to decide? At the same time, nostalgia is the Bond song's go-to mode, and Gaga's appeal always contained a healthy dose of nostalgia. So Gaga might actually be a more natural fit than Madonna. Plus, Gaga's recent collaborations with Tony Bennett have moved her closer to the traditional Bond song sound.

They wouldn't go with Adele again, would they? Well, with any other franchise you could bet on that. But when you get a huge hit out of a singer, when that singer's effort is called "the best since Goldfinger," and when Goldfinger was sung by an artist who ended up doing three Bond songs? Doesn't sound so nuts now, does it? The British tabloids say Adele's the one. But remember: the Bassey songs ("Goldfinger," "Diamonds Are Forever," and "Moonraker") were spread out over a 15-year period. So even if the producers think Adele is their new Shirley Bassey, expect her to return a film or two from now, but not right away. Not that it wouldn't be fun to hear Adele wrap her weirdo hybrid Anglo-American pronunciation around the word spectre.

Yeah, you wish. If producers decide to fully youthify Bond, Mars could be a phenomenal choice. But the Bond producers have resisted going full fountain-of-youth on their franchise. (Craig is younger than Roger Moore, but it's not like replacing William Shatner with Chris Pine!) Bond lives in a kind of generational no man's land, where young and old could agree on tolerating the song. Mars embodies a type of male singer that the Bond producers have rarely tapped for their songs (same reason John Legend won't get picked). It's weird. The female performers have been a regular United Colors of Benetton ad; the male performers have resembled the US Supreme Court (one black guy). Think about it: the Norwegians from A-ha, the Brits from Duran Duran, Chris Cornell, Jack White . . . wait, maybe the Coldplay people are on to something.

Speaking of superwhite: Sam Smith, ladies and gentlemen. He may deny it, but he's the prohibitive favorite if the professional bookmakers and Out magazine are to be believed. And it makes a lot of sense. Hot off a bunch of award wins, Sam Smith is basically the Adele of 2015, and he sort of sounds like her too. A white crooner with strong pretensions at blackness; a strong, identifiable voice that can nevertheless accommodate itself to different genres; songs about relationships that aren't as dippy as Ellie Goulding's, as messed up as Gaga's, or as tantrically boring as Coldplay's. Behold 2015's consensus candidate. Will the song be any good? With the right songwriters and producers absolutely. Will this be the most interesting Bond song imaginable? Hell no.

Sam Smith (Vegas's odds-on favorite for the gig) suggested her — and maybe he's onto something. Adele was the rare singer who can get 50-year-old Bond nerds and 20-year-olds to agree on something. But it was probably the 20-year-olds who pushed the track up the pop charts. If that's how the producers see it, then why not go with Ellie Goulding? Sure, the electro-sprite will leave behind the 50-year-olds, and certainly the Bond nerds. But she'll bring in the kids, and she might even bring them into the theater before they decide to torrent Spectre. Ellie Goulding was also spotted leaving Abbey Road Studios, the place where many Bond songs have been recorded before.

Daniel CraigMusicSpectreMoviesJames Bond
Around The Web

Music
Jesse McCartney, an Un-Masked Singer, Celebrates His Friends From Afar With New Bop
by Karenna Meredith 1 day ago

Netflix
Netflix Has 9 New Original Movies Coming in June, and You Could Say We're a BIT Excited
by Corinne Sullivan 8 hours ago

Netflix
Wondering What Songs You're Hearing on Sweet Magnolias? Let Us Help With That, Honey
by Amanda Prahl 1 day ago