You know what's not great? Crash-landing on an island inhabited by a giant angry ape. King Kong is a monster as old as time (well, kind of), and Warner Bros. is bringing him back to the big screen with the reboot Kong: Skull Island. Tom Hiddleston, Brie Larson, John Goodman, and Samuel L. Jackson play the unlucky team who find themselves on Skull Island, home to the notorious big bad. Watch them try to survive in the latest trailer above before the movie hits theaters on March 10, 2017. 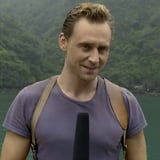