Stephen "tWitch" Boss is in the stud-heavy cast of Magic Mike XXL, and if that first look at him dancing is any indication, he'll be giving the other strippers a run for their money. The dancer/Ellen emcee chatted with us and a few reporters on the set last year, where he was happy to talk about his infamous TV waxing and what it's been like to join the sequel. Boss also has some funny restrictions for family members seeing the film, as in, they're banned — and the newlywed also talks about what he's had to explain to his new wife, Allison Holker. 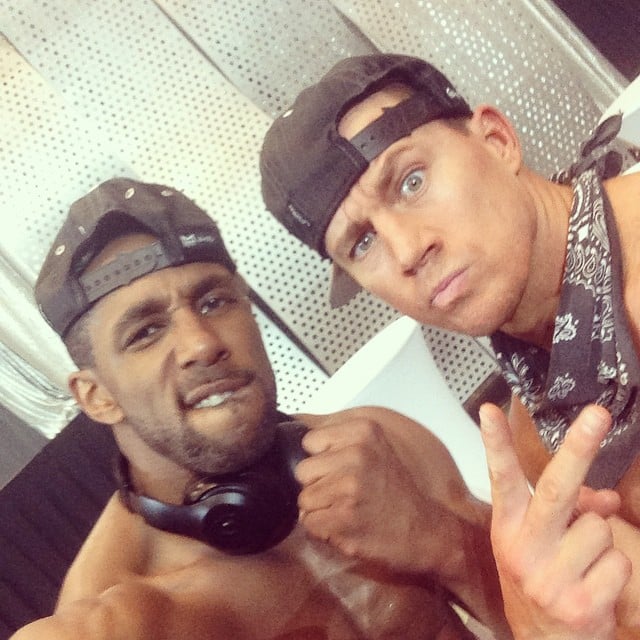 You publicly got waxed on The Ellen DeGeneres Show. Was that your decision?
Stephen "tWitch" Boss: Yeah, it was because it was something that I had never done before, and I was like, you know what? I might as well do it in a really epic fashion and that was just the way to go. Ellen was supersupportive of it, and to be quite honest, it actually pushed me to do it because I told myself I was going to do it for my 32nd birthday. Not a good birthday present to yourself to get waxed for your first time. And I procrastinated and I procrastinated so that actually it pushed me into it, getting other people involved. It actually made me do it, because by myself I probably would have just shown up and just shaved, which I heard is different. I heard it's a different outcome. My wife told me, "No, you're going to have to wax that."

Channing Tatum said it's called a stripper convention but it's not actually a convention. So what is it actually?
SB: A stripper convention is basically like — think of it set up as if this were actually a big, grand strip club. Then different groups of guys from different strip clubs around the country come perform a 20-minute set. So depending on how the crowd is loving it, you could get cut off at five to seven minutes, or they could let you have the entire 20 minutes. So it's basically a grand stage for everybody to come showcase their latest works.

Can you tell us about your character?
SB: Yeah, my character's name is Malik, and I was basically established in Jada's [Pinkett Smith's character's] club, Dominance. So in that club we do things a little differently than Mike's crew used to do. Rather than just putting on stage shows, we play to the individual needs of our customers. So each room has a different feel for us. So my room is where you would come if you wanted a lap dance, or you would go to Donald [Glover]'s room if you wanted to be serenaded, or you would go to Michael Strahan's room if you wanted to be massaged or something like that. So with that, I'm the only dancer in this group.

Channing said that you're the best dancer by far. What does that feel like, having someone like Channing say that?
SB: It's an honor. It's an honor, to be quite honest. I work really hard at what I do. He also tells me how [I look like an] exoskeleton. I've been working out real hard because Joe [Manganiello] is going to be on stage, you know what I mean? So he already towers above me, so I'm not trying to be like, next to him. But Channing gets on me because I work out too much.

What's too much?
SB: Obsessively. A couple of times a day and in [my] spare time. While I'm back here, I'm either going over the routine or I'm downstairs lifting. I don't want to look small. Joe is mad big. He's a big dude . . . film is forever. You gotta be able to stand next to Joe.

Did he give you any props since he has the fitness book?
SB: No, he didn't. He did give me the book though, so I didn't know if that was a hint or what. I'm like, "Thank you?" But either way, he's a cool dude.

You're still pretty newly married [to Allison Holker]. What does your wife think of all this?
SB: You know, she's very supportive. But there's a lot left to the imagination because she's not here. So it's a lot of late-night phone calls and really awkward picture texts. Today we did a costume test with something that we have to wear, and I sent her the costume and she was like, "Oh my god." She's very supportive and very excited, but I'm going to have to be there holding her hand through the film like, "All right, baby, get ready for this part . . ."

Is there anyone else in the family that you're nervous to have see the movie?
SB: Oh yeah, my grandparents are not going to see this movie, and my in-laws will not be seeing this movie. You know what I'm saying? My in-laws will not be seeing the movie. That's about it. Those are the ones that I really feel like I'm really going to have to sit down and have a serious conversation. Like, "Listen, I appreciate the support, but don't go see the movie." I don't need Christmas dinner conversations about G-strings and thongs.

Tell us about your first experience trying on a thong.
SB: It was kind of like the waxing experience. It was different. I didn't know what to expect, and [it was] slightly painful, the first couple of steps.

[Chorus of female reporters:] We know. Yeah, we know . . .
SB: Let me tell you this. Look, listen [after] going through the wax situation, if y'all ever said, "I don't ever want to do this again," I stand behind you. If your boyfriends need to talk to me for some kind of support, I'm there for y'all. I will back y'all up 100 percent.

What about thongs?
SB: Thongs too, yeah. Whatever! Thongs, waxing. Out. That's all elective for y'all. Trust me, I'm on your side. Hit me up. I'm down.

What's your favorite song to strip dance to?
SB: My favorite song to strip dance to? It's called "Sex You" by Bando Jonez. When I found out I was going to have a solo strip routine, I started going into like mad old-school R&B, like old. I don't know why; it just kind of brings out the freak in you or in me. So like old-school Jodeci. I listen to some Michael. Michael don't really make you feel that special like that you know. But Bando Jonez's "Sex You. "

What would you say is your signature dance move?
SB: My signature, if I had one, would be the popping style, which is where I get my name "tWitch" from, which is from muscle contractions. So that's my signature thing.

Was there anything you had to help Channing with?
SB: To be quite honest, as you know, Channing can actually dance. Not like kind of moving around; he can actually dance. So with that, it was more of a collaborative effort of putting our freestyles together into choreography.