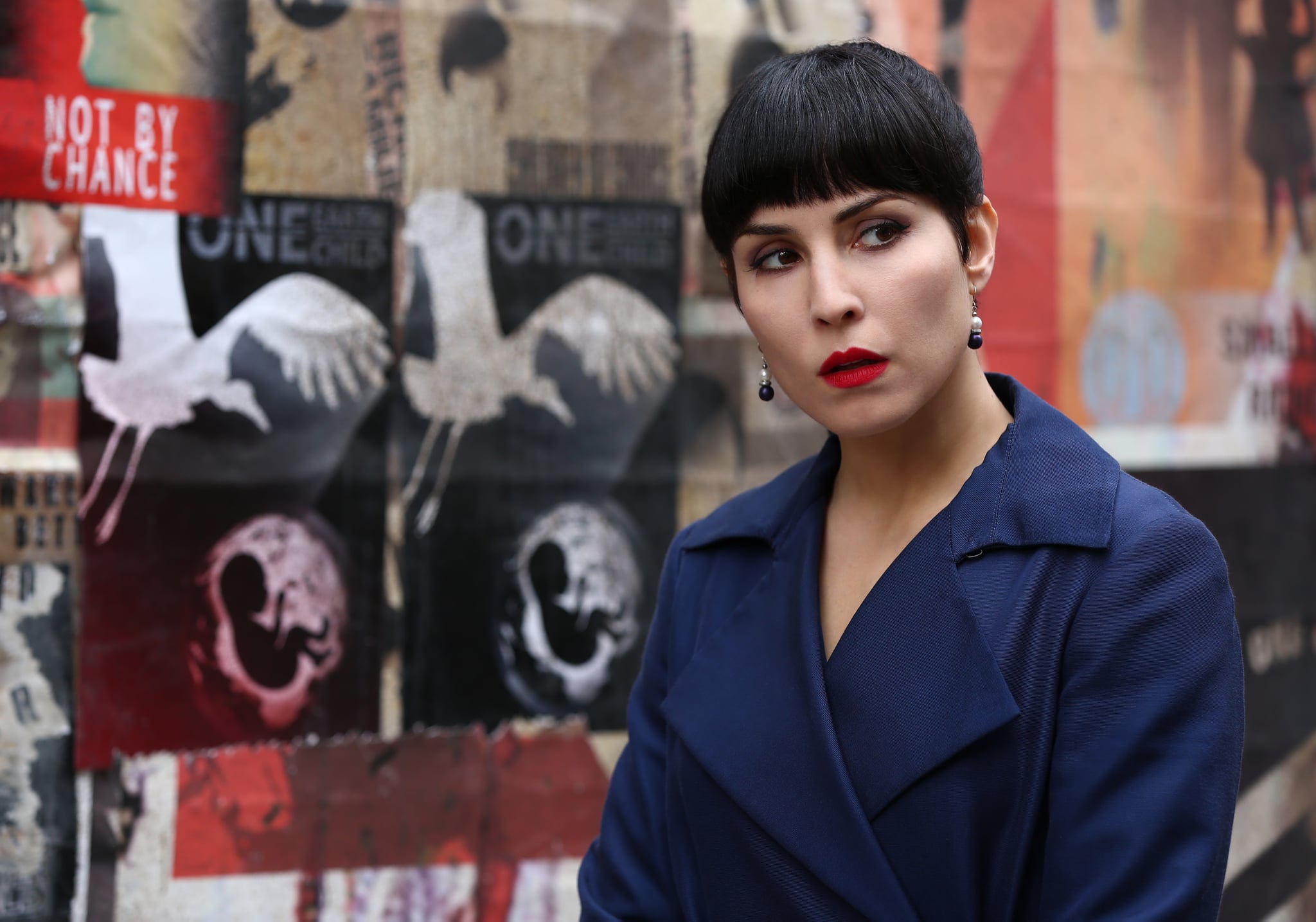 The Swedish actress stars in the streaming network's dystopian action flick, out Aug. 18, as identical septuplets named after each day of the week. All seven sisters have grown up living in hiding thanks to the government's law restricting families to one child only due to overpopulation, so their grandfather (Willem Dafoe) allows them out of the house only on the day corresponding with their name. They're able to maintain one public identity through adulthood, until a government agency led by the steely Glenn Close picks up on the scam. Monday doesn't return home after her day out, and soon enough her sisters savagely work their way through a long line of agents (and end up getting picked off in gory fashion themselves) in an effort to save her.

Signing on to play a character who flings herself out of second story windows and chops off fingers is not an unusual choice for Rapace, who has steadily built her career around projects that allow the slight, 5'4" star to fully embrace her physicality after a childhood spent practicing martial arts. "I don't really go and chase [those roles]," Rapace tells me during a recent phone call. "I'm very drawn to physical parts because I like doing all of that and it's always a fun ride, but it always needs to be coming out of a character and be character driven. When it's just pure action, that doesn't really do much for me. I like an action movie with real drama."

After hypnotizing audiences with her raw, gritty performance as Lisbeth Salander in the 2009 adaptation of The Girl With the Dragon Tattoo, Rapace racked up action-heavy roles in films like Sherlock Holmes: A Game of Shadows and Prometheus. She carries the latter film on her shoulders, enduring a stomach-churning, self-induced alienectomy that rivals Alien's iconic chest-burster scene and cemented her as one of Hollywood's most gifted action stars. Though she might not have consciously sought out parts to showcase her combat-ready skills since then, her choices did not go unnoticed by What Happened to Monday director Tommy Wirkola, who made a massive change to the script so that Rapace could star after multiple attempts to cast her in some of his previous projects.

"I was terrified. It was like, 'If this doesn't work, it's all on me.' I stepped into this knowing that I had to do something I've never done before and no one's done before."

"He called me up and said, 'So, Noomi, I have this project, I want you to read it. It's actually seven brothers, but if you want to want to do it with me, because I can only imagine you doing this, I want to change it into women, to seven sisters.' Then he sent me the script and I read it, and I called the next day saying, 'OK. Absolutely, yes.' But I was terrified," she recalls. "It was like, 'If this doesn't work, it's all on me.' I stepped into this knowing that I had to do something I've never done before and no one's done before, because it's not seven clones. It's not a person with multiple personalities. It's actually seven different people."

Rapace immediately began working closely with What Happened to Monday's screenwriter to fully flesh out each of the sisters so that they felt "real and solid, like a real person." As she began the journey to make Monday, Tuesday, Wednesday, Thursday, Friday, Saturday, and Sunday feel more like women you know rather than shallow caricatures, she was surprised to find pieces of her own past staring back at her.

"What was kind of amazing was I realized that they are all me," she says, laughing. "It's like seven versions of me at different times in my life. There was a time in my life when I was more like Wednesday, when I was only training all the time, doing kung fu and Thai boxing, a complete tomboy. And then I was more rebellious, a punk rocker, more like Thursday, kind of angry and explosive. It's been interesting to realize that it's all in me. I have them all."

Now, more than ever, female characters in action movies are getting to be more than Just One Thing: the sexy sidekick, the scientist, the secretary.

Saturday, the most complex and feminine of the bunch, was Rapace's personal favorite, however. She enjoyed exploring the character's "flirty, sexual humor" and sincerity, and prepared to embody the character by listening to a lot of Rihanna and Beyoncé. Though Saturday isn't the toughest sister or the one who gets to go to town on a high-tech punching bag, she's closer to the recent spate of feminist heroes leading the movies this Summer. Women have certainly been holding their own in action-heavy films for years (Rapace is proof), but now, more than ever, female characters in action movies are getting to be more than Just One Thing: the sexy sidekick, the scientist, the secretary. Instead, women are taking over as action stars in their own right. Characters like Wonder Woman's Diana Prince and Atomic Blonde's Lorraine Broughton have refreshingly frank (and positive) approaches to sex, and never once falter or pause to question their own self-worth all while saving the entire damn world. It's a welcome trend, to be sure, and it's not surprising in the least to Rapace.

Related:
4 Wonder Woman Scenes That Could Have Been Very Different If They'd Been Directed by a Man

"It feels like I've been doing these kind of parts — running, fighting, surviving — for many, many years. I can totally see the wave of films coming out now with really strong women doing parts that men normally do," she says. "Just the fact that they changed What Happened to Monday from being seven brothers into seven sisters for me, I think that is something that's happening more and more, and it's amazing. Obviously it's time for a change, because it's been too many years of women being simply something to light up and spice up male-dominated films. That era is totally over."

For a woman who grew up watching Susan Sarandon and Geena Davis paint the town red in Thelma and Louise and who cites the moment in True Romance when Patricia Arquette and James Gandolfini fight to the death as one of her "favorite scenes, ever," it's no wonder she became the actress she is today (and why Wirkola bent over backwards to make sure she was a part of his film). Fortunately for all of us who adore watching Rapace kick ass on the regular, there's plenty more on the way. After What Happened to Monday premieres, she has a role in the CIA thriller Unlocked alongside Orlando Bloom and Toni Collette, and then Netflix's big-budget fantasy-crime flick Bright in November (in which she plays an elf who beats up Will Smith, naturally).

"I think it's amazing that things are changing," she adds. "It's a strong, good message to girls today. Women are not objects. We are not here to be judged and looked at as just sex symbols or cute, nice girlfriends. We are who we are. We're all queens in our own queendoms."

Movies
In the Heights Is Full of Lin-Manuel Miranda Easter Eggs, Including a Clever Hamilton Nod
by Karenna Meredith 4 hours ago

Movies
Will There Be an In the Heights Sequel? The Cast Is Keeping Their Fingers Crossed
by Monica Sisavat 9 hours ago