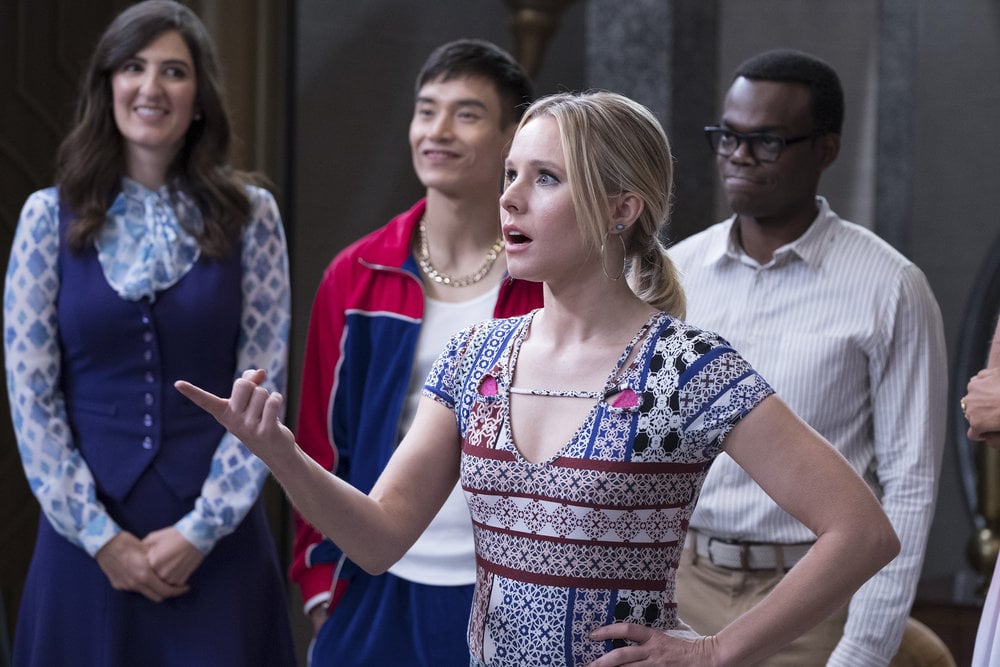 The Good Place and Parks and Recreation are two of the most-loved sitcoms in TV history, and both happen to come from the same creator — comedic genius Michael Schur. The connection between the two shows is a little deeper than you might think, though, which we discovered thanks to ultrasavvy Twitter user Darran Stobbart: they EXIST IN THE SAME UNIVERSE.

As you let this insane reality sink in, let's dig into the newly revealed facts a little further.

In the recent second season finale of The Good Place, my personal heroine Eleanor Shellstrop (Kristen Bell) spends some time flipping through copies of a decidedly non-Good-Place-worthy tabloid called Celebrity Baby Plastic Surgery Disasters. While we giggled at what appeared to be a low-quality rag with LOL-worthy covers — like a $3 million makeover on a baby named Mhavryck (which may or may not have been worth it, who knows) — it's now clear that our full attention should've actually been on the back covers of the magazine. On not one but two copies of Celebrity Baby Plastic Surgery Disasters, there are clear references to characters from Parks and Rec.

Just discovered that The Good Place takes place in the Parks and Rec universe and now by whole brain is crying. pic.twitter.com/UjtJLSclrA

The first is for a Jean-Ralphio Saperstein-branded Champagne, one that naturally carries one of the most Jean-Ralphio-esque slogans of all times: "Turn that frizown upsidizity." The second is an ad for Glyde, the latest fragrance from Dennis Feinstein (or should we say Dante Fiero?) — and it's pretty safe to say that the otter-branded scent is probably in the same league as the now-classic odor of Tommy Fresh.

This is obviously one mind-blowing connection that we'll be thinking about for quite a long time and yet another reason we can't wait for the series to make its return to TV later this year.