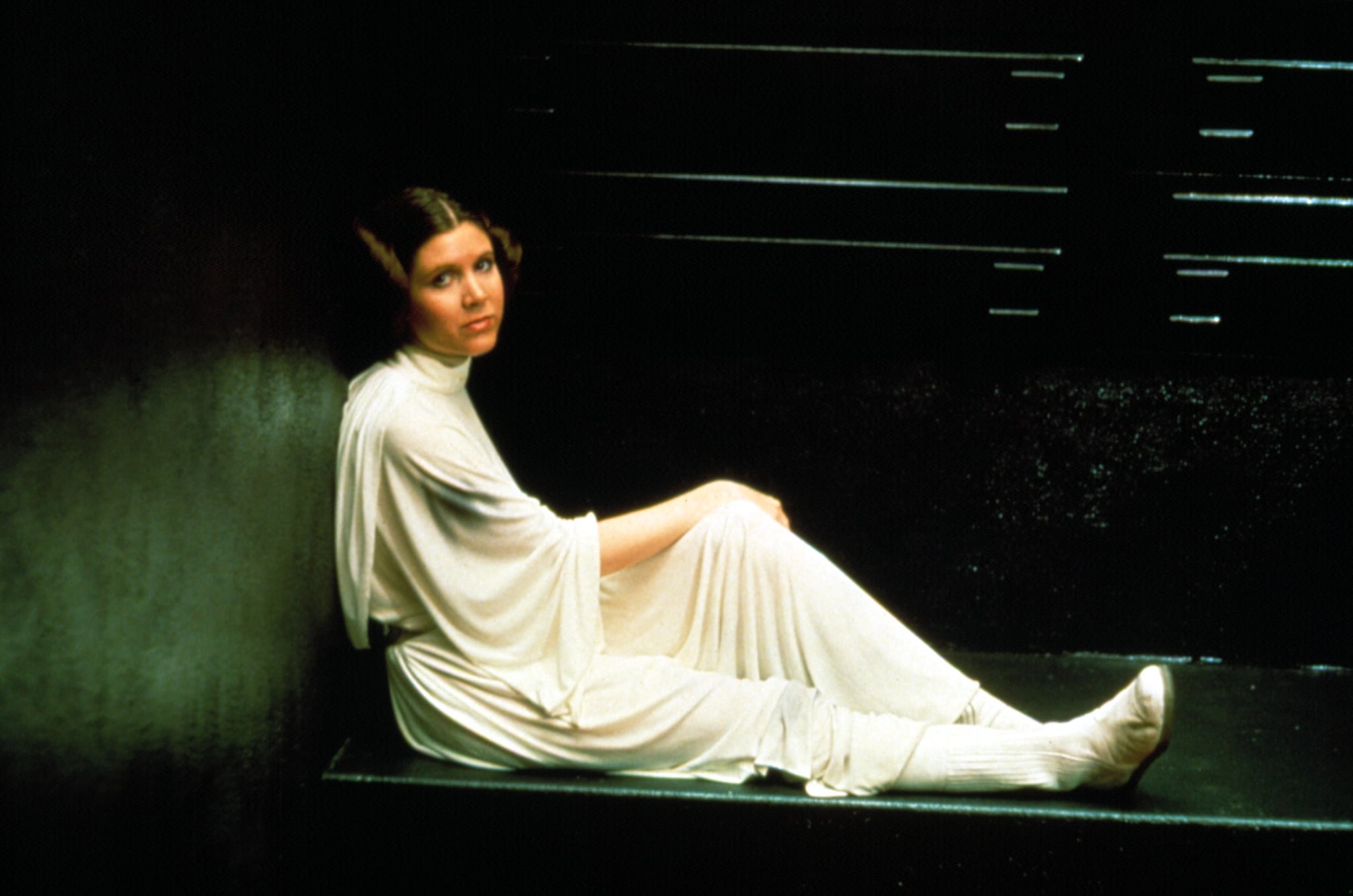 A few years ago on Good Morning America, Star Wars: The Force Awakens director J.J. Abrams remarked on the franchise's past with female fans. "Star Wars was always about — it was always a boys' thing and a movie that dads take their sons to," Abrams said, "and though that's still very much the case, I was really hoping that this could be a movie that mothers can take their daughters to as well." For some, this comment was viewed positively, even applauded. My Fangirls Going Rogue podcast co-host Teresa Delgado embraced the message about mothers and daughters, while I was a bit taken aback. On social media I watched others share similar, occasionally harsher, reactions. For a time Star Wars had become viewed as a boys' club, both in the public eye and by some decision-makers within Lucasfilm and its licensees. For anyone there at the beginning, however, we know the truth. Abrams' perspective simply wasn't reality.

The opening crawl of A New Hope, just called Star Wars in 1977, introduced audiences to the plight of a young woman, Princess Leia, and her goal to deliver stolen plans for the evil Empire's superweapon, the Death Star, to the Rebel Alliance. Dressed in simple white robes that symbolized virginal purity, she shoots at Stormtroopers, ensures her droids escape with critical data, and sacrifices herself to capture by the villainous Darth Vader. In the quest to complete the princess' mission, the droids R2-D2 and C-3PO cross paths with a farmboy, Luke Skywalker, who has lofty dreams of escaping his mundane life. They lead him to the mentor, Obi-Wan Kenobi, who sets Luke down the path to heroism. Ultimately, Luke fires the torpedo that destroys the Death Star, carrying Leia's mission to conclusion in a victory against all odds that offers the movie's denouement.

My grandmother took me to see the movie in 1977. The tale is one of dueling forces: good versus evil, selfishness versus selflessness, love versus hate. In Princess Leia I saw a hero, and in Luke I saw the path to becoming a hero like Leia. They formed the dueling forces in my eight-year-old psyche. Sure, Han Solo and Chewbacca join Luke to break the princess out of the detention cell, but their role is an assist. Without Leia grabbing Luke's blaster and shooting a path to the garbage compactor, the rescue would have been over as soon as it started. Remarkably, Luke's gender never swayed me from identifying with his Hero's Journey. Leia's place as an uncompromising heroic badass woman in film, in an era when they were hard to find, elevated her to a special place in my fangirl heart. She became my gold standard for strong female heroines in stories from that point forward.

In 1977, I was not the only young woman to feel a special affinity for Star Wars. Not every female fan gravitated to Princess Leia as their favorite character, though. In oral histories I have performed as part of my critical investigation of fandom, women who had been young professionals in 1977 told me they found Darth Vader especially enticing. Undoubtedly Han Solo, who tops Luke Skywalker and Princess Leia in many fan favorite polls to this day, appealed to women looking for a James Dean-esque bad boy; others simply wanted to be Han Solo, as expressed in this 2015 Mary Sue piece. In the earliest years, women ran the Star Wars Fan Club and most of the fanzines, publications that kept die-hards in touch and interested between the movies. One fanzine even ran an article lamenting the lack of men active in the fandom circles. When Abrams said the franchise "was always a boys' thing" he spoke to a perception, not the truth. Six of the eight members of the Story Group hired by Kathleen Kennedy to shepherd Star Wars into the future are women, and many of them have talked openly about being fans from the beginning.

Deadline described the internet reaction to Abrams' Good Morning America appearance as "fierce criticism." Among my peers, I witnessed another reemergence of a reflexive defense mechanism against being erased from Star Wars' cultural history. It is a defensive mechanism earned in the years following The Empire Strikes Back, when pop culture headed into an era of backlash against the feminist wave of the 1970s that had heralded the arrival of Princess Leia on film and Wonder Woman on television.

Back then, Star Wars t-shirts were things you made with an iron-on, but that slowly changed until mass-produced shirts were displayed only in men's section in stores. Apparel is the unspoken language of fandom. If you can't wear a shirt, you can't declare your affiliation to the masses. Also in the 1980s, children's toys became king in Star Wars, and toy companies and retailers were shifting from genderless sales pitches to stark pink-versus-blue gender divides on shelves.

Then Return of the Jedi happened. While the story allows Princess Leia to slay the Hutt who put her in the gold bikini of a slave, there is no doubt Carrie Fisher was put in an outfit intended to sexualize her. The dichotomy between the characterization for Slave Leia in the story and the real-world objectification of the character has resulted in controversy for years. Another firestorm of discussion arose recently, brought to a head when Amy Schumer appeared as the Huttslayer in GQ magazine the same week a father protested finding the sexualized action figure in the kid's toy aisle. 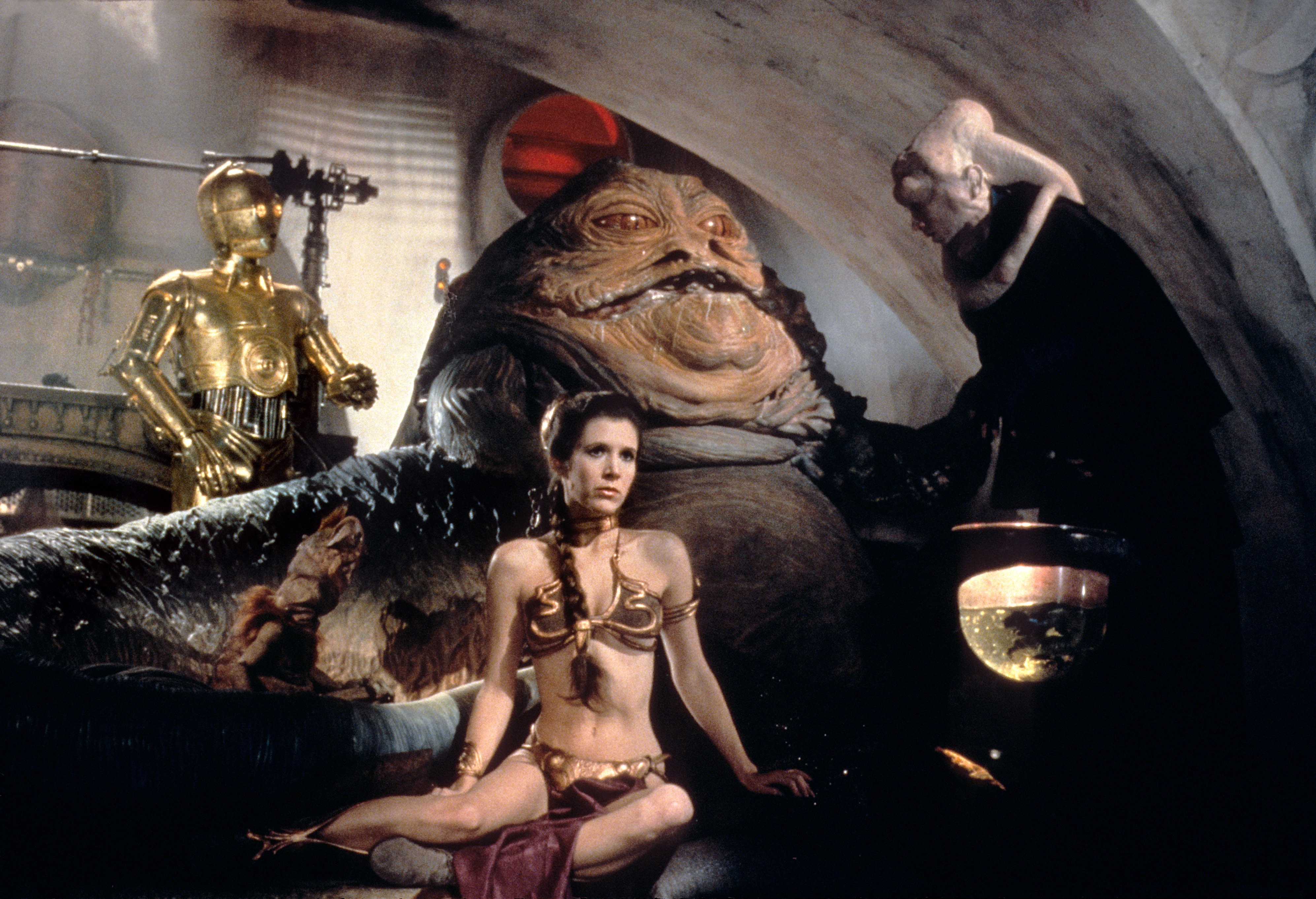 The franchise's willingness to exploit the Slave Leia costume, and later the midriff-baring Padmé Amidala costume, in their marketing – neither of which epitomizes who these feminist icons were as characters — put Star Wars out of step with feminist resurgence of the last decade. As a feminist moving about in pop culture circles, I noticed Leia and Padmé didn't come up in conversations about the greatest female characters in genre entertainment. Princess Leia had defined my feminism and the feminism of many of my fellow fans, although it took a much older and wiser self than the girl who learned my heroine's story over thirty years ago to discover that truth.

For Padmé, I understood the reluctance of many feminists to embrace her. George Lucas started off Padmé's story with a bang; she and the handmaidens were a band of Leia-worthy badasses in
The Phantom Menace. Padmé, with the help of her handmaidens take back her throne on Naboo. But as with Leia, Star Wars failed to truly deliver a complete story arc worthy of Padmé's feminist origins, particularly her role and fate in Revenge of the Sith. In later years, The Clone Wars animated television series faced a similar dilemma, introducing multiple significant new strong female characters to Star Wars but often bringing them to fates that undermined their character arcs or sacrificed them in service of a story arc for a male character. Creating iconic female characters has been one of Star Wars' strong points, but fulfilling on the promise of their characters still leaves substantial room for improvement in the eyes of many feminist fans.

That brings us to Rey, the scavenger living a solitary life on Jakku in The Force Awakens. She is the lead character in a film franchise that is steeped in myth and the Hero's Journey. She carries a staff, and trailers give us a glimpse of her using it, too. The earliest teaser revealed the Millennium Falcon swooping across the landscape of Jakku. Everyone assumed it was Han Solo flying, but we now know that is Rey at the controls. Later advertisements include epic shots of her firing a blaster, reminiscent of Luke's emotional venting at Vader after Kenobi's death, Han ducking into his ship like a space cowboy, and definitely Leia every time she nailed a stormtrooper with her stellar aim. From what we saw in The Force Awakens media blitz, Rey possesses all of the traits my inner fangirl put on her list of hopes and dreams for a Star Wars heroine — including brandishing a lightsaber.

I am a feminist because of Star Wars, and a feminist despite the times Star Wars forgets we female fans have been here all along. Ultimately, George Lucas picked the right woman to take over Lucasfilm in Kathleen Kennedy: there is a feminist in charge. As Han Solo would say, "We're all fine here."

Tricia Barr is author of the award-winning space opera Wynde and Ultimate Star Wars and is a featured contributor for Star Wars Insider magazine. She cohosts the popular Star Wars podcast Fangirls Going Rogue. Tweet to her @fangirlcantina!