This week is an exciting time, with the novel Star Wars: Bloodline released this week and the unofficial Star Wars Day, May the Fourth, celebrated by fans worldwide today. In addition, May 1 marked the 25th anniversary of another Star Wars novel, Timothy Zahn's long-acclaimed Heir to the Empire. In 1991, Heir to the Empire hit shelves during the Dark Times — the era when Star Wars fans didn't think there would ever be more franchise movies. The book was a hit, and two more followed to complete the Thrawn trilogy, which Tor.com calls the "book series that arguably revitalized and reinvented Star Wars forever." Two years ago, Lucasfilm transitioned Heir to the Empire and the rest of the Expanded Universe books and comics to the status of Legends, opening up Star Wars storytelling going forward. 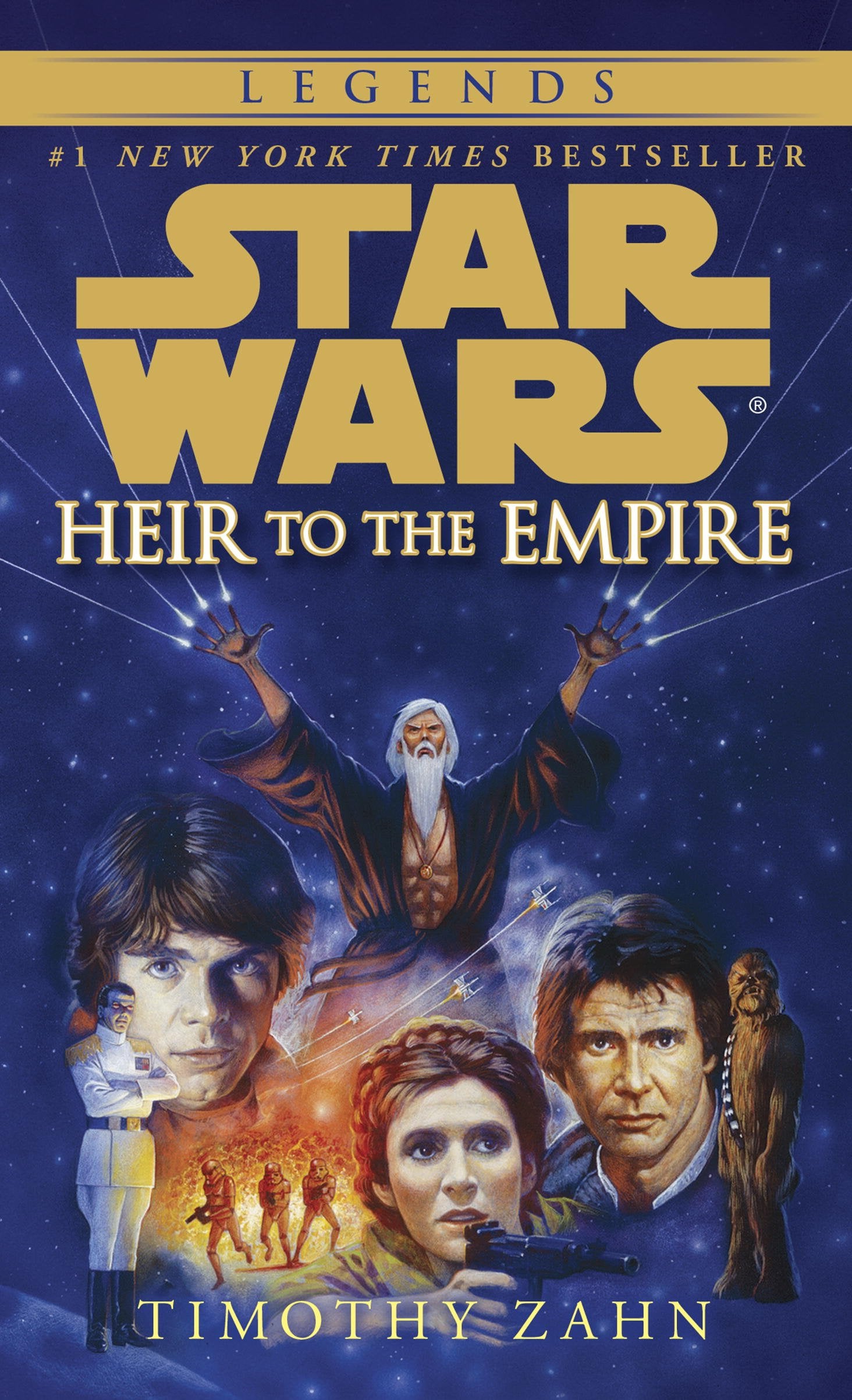 Fan-favorite characters Grand Admiral Thrawn and Mara Jade may be legends now, too, but the tale that brought them to life has left its mark. In my article How Star Wars Made Me a Feminist — Even When the Franchise Was Not, I discussed how the original trilogy shortchanged Leia's arc. Twenty-five years ago, Heir to the Empire gave pregnant Leia an active role. She had already married Han, but nefarious kidnapping plots and their duty to the New Republic tugged them in different directions. Far afield from the wranglings of the fledging galactic government, Leia was confronted by the shadow of her real father Darth Vader's legacy while also beginning to learn about her own Force potential. The Thrawn trilogy built on the positive start for Leia in the movies. Leia leaned in, decades before Sheryl Sandberg coined the phrase. Antagonist Mara Jade wields a lightsaber in the books, while the first onscreen female Jedi didn't appear until the prequel trilogy, and the first live-action female villain, Captain Phasma, didn't appear until The Force Awakens. Heir to the Empire was the gateway into the franchise for many feminists.

Bloodline author Claudia Gray draws upon similar elements that made Heir to the Empire successful. Bloodline infuses the galaxy far, far away with socio-political dynamics that affect us today, making the story fresh and relevant. The Force Awakens tries too hard to avoid the criticisms leveled at the prequel trilogy, particularly the heavy thread of political machinations, and fans were actually left wondering what type of political divide would compel the First Order to destroy entire star systems. A New Hope might not have fleshed out the politics, but the broad brushstrokes were evident: Leia, a member of the Imperial Senate, had stolen plans for the Empire's superweapon; Grand Moff Tarkin's rationale for testing the Death Star's destructive capabilities on her homeworld of Alderaan was quite clear. The Force Awakens ends with Luke still a mystery, Han dead, and Leia commanding a paramilitary force known as the Resistance, which has incompletely explained ties to the New Republic government blasted to oblivion by the First Order's new superweapon. Star Wars: Bloodline fills in the blanks by explaining the origins of the Resistance, with Leia as the focal point of the story.

Back in 1991, Timothy Zahn recognized that Star Wars needed more than one strong female character to make the galaxy go round. The Force Awakens makes strides forward from the original trilogy, but no more so than The Phantom Menace. The critical Resistance scene, where they plan the attack on Starkiller Base, features Leia and a cast of men brainstorming. One woman other than Leia speaks, only to provide information to General Organa. In Bloodline, by contrast, Gray provides Leia with a trusted staff and allies, many of them women. Some of them we see briefly in The Force Awakens. Korr Sella, who stares up into the sky from Hosnian Prime in the moments before its destruction, works as Leia's Senate intern. Dr. Kalonia, who tends to Chewbacca on the Resistance base, is someone Leia trusts and respects. New characters appear, too. Leia's Chief of Staff, Greer Sonnel, who has personal ties to Leia's husband Han Solo, helps introduce much of the backstory on what the scoundrel has been up to in the time since the destruction of the second Death Star.

Although Han's and Leia's time together in The Force Awakens plays out as a wake for a long-dead relationship, Bloodline gives us glimpses of the good times and the happiness. Although for some marriage is a commitment to remain at each other's sides, Leia's perspective on her marriage in Bloodline reflects the reality for many working couples in this day and age. It wasn't until after I read Gray's take on Han and Leia that I really cried over Han's death. Gray doesn't simply bolster events in The Force Awakens with her story, she also draws readers back to some of the most important beats in the original trilogy. Crafting strong female characters has been a topic of much discussion and debate in recent years. Advocates want to see women who are fierce and powerful, yet also flawed and vulnerable.

This has been a subject the Star Wars books have not addressed very well over the past decade. Gray gives a masterclass with Leia, using the backstory of her capture by Darth Vader in A New Hope. Leia is wounded, lashing out as any human subject to that type of torture, but also resilient. Gray also takes on the matter of Leia's capture by Jabba the Hutt, when she is forced to wear the revealing gold bikini, a topic that has been discussed far and wide inside and outside of fandom circles. Comedienne Amy Schumer's controversial GQ photos in the costume brought the topic to prominence again last year, about the time Bloodline was being written. In an interview with Entertainment Weekly, Gray confirms that the fan discussion about redubbing the costume "Slave Leia" to "Huttslayer" moved her to return to that original trilogy moment and empower the character as part of a plot point in her novel.

Bloodline also highlights the importance of continuing to speak up in support of this new trend in Star Wars author-hiring. In the past, too many Star Wars books and comics perpetuated harmful tropes, such as fridged female characters — most notably Mara Jade in the 2007 novel Legacy of the Force: Sacrifice — and used female characters solely as plot devices to serve male characters' arcs. Taking a cue from our first Star Wars heroine, feminists began to resist the blindered patriarchal fan service of the books, which spiraled out of control as Padmé's story faltered and fizzled out after a stellar start in The Phantom Menace.

In the days before Disney's purchase of Lucasfilm, a good portion of the female fans who had become invested in the Expanded Universe felt as defeated as Leia in the moments after her son kills Han in The Force Awakens. Although many fans see cause for optimism in the Star Wars franchise overall in the Disney era, even newer canon entries Heir to the Jedi and Dark Disciple, both released last year, have repeated the same timeworn problems.

Like Leia in The Force Awakens, who knew she needed the Jedi to bolster the Resistance's fight against the First Order and the closing darkness, those fans who have advocated for better portrayals of women in Star Wars books know we need the right kind of champion to effect change. Last year the internet buzzed about news of LGBT characters in Star Wars books, first Moff Delian Mors in Paul Kemp's Lords of the Sith, and later Imperial deserter Sinjir Rath Velus in Chuck Wendig's Aftermath. As The Wrap noted, these weren't the first LGBT characters in Star Wars, not including other instances of characters, such as Face Loran and Ton Phanan in the Legends X-Wing series — or Sabé and Padmé from the prequel trilogy, who could be open to interpretation the same way some fans have rallied around Finn and Poe. For those who have been asking for Star Wars to diversify, Kemp's and Wendig's entries seemed like steps in the right direction, especially for Kemp, who had been criticized for his masculinity-oozing Legends contributions. Interspersed with positive gains were major steps backward for diversity: Heir to the Jedi introduced a capable and interesting woman of color, only to kill her to advance Luke's path to becoming a Jedi; in Dark Disciple, extensively developed antihero Asajj Ventress dies simply to reinforce, yet again, the obvious notion that the prequel trilogy Jedi Order had lost its way.

Also in 2015, Disney Publishing, with little fanfare, dropped a young adult entry called Lost Stars into the Star Wars prose fiction pool as part of the "Journey to The Force Awakens" releases. It took the Star Wars book reading community a while to catch up to the overwhelming positive critical buzz for Lost Stars, which follows the lives of two pilots through the events of the original trilogy and ends at the Battle of Jakku, the ravages of which later prove to be the scavenging grounds for The Force Awakens's hero Rey.

Having demonstrated her skill at creating an original and diverse cast of characters and peppering their story with brilliant minor roles for fan favorites like Wedge Antilles and Mon Mothma, Claudia Gray was passed the baton to spin a tale that ties into the most successful Star Wars movie ever. This may seem like a no-brainer considering she is a bestselling author and lifelong fan of the franchise, but all too often slots for authors of adult Star Wars novels had gone the way of blockbuster franchise movie directors in the recent years. It was more likely to see a man who had no experience being tasked to write an adult novel rather than a woman with bestseller credentials. Bloodline reinforces just how much the franchise benefits when individuals with the backgrounds, sensibilities, and expertise to deliver truly top-notch Star Wars stories are finally given their rightful seat at the table.

Claudia Gray's Star Wars: Bloodline alone can't entirely address the reasons The Force Awakens is not actually that feminist, of course, but it's a start. Leia's story builds on the character's strengths that made her a vanguard back in 1977. While Padmé is only mentioned briefly, we can see Leia's birth mother reflected vividly in the things Leia does, right down to taking action when politics proves ineffective. Although Star Wars has become so invested in daddy issues that it neglects to portray mothers as equally important figures, Bloodline makes small steps, showing Leia as a mother, and as a daughter that thinks of her mother. Most notable, though, is that Gray's novel took almost every criticism for better portrayals of characters outside the cis white male demographic and made it happen. Like Leia is to the galaxy, hiring Claudia Gray was about bringing in the right person to get things done.

Tricia Barr is host of Fangirls Going Rogue, a popular Star Wars podcast, and coauthor of Ultimate Star Wars. Follow her at @fangirlcantina and she will wish you a Happy Star Wars Day.

Movies
Get Ready to Blush, Because These Are the 42 Sexiest Movies of All Time
by Corinne Sullivan 2 hours ago

Movies
Exclusive: Emilia Clarke and Henry Golding Can't Keep It Together in Last Christmas Bloopers
by Kelsie Gibson 6 hours ago