Breaking Bad may be over, but we'll be reunited with Aaron Paul when his new movie, Need For Speed, hits theaters this weekend. In the video-game-turned-film, Paul plays Tobey Marshall, an ex-con and street racer who drives in a cross-country race while out for revenge. I visited the edit bay for the action movie with a group of reporters, where Paul, director Scott Waugh, writer/producer John Gatins, and producer Mark Sourian chatted about the film. Paul and the filmmakers were proud to highlight how Need For Speed is different from other racing films: specifically, most of the racing and stunts were shot practically, meaning they really shot the action and avoided using CGI as much as possible. 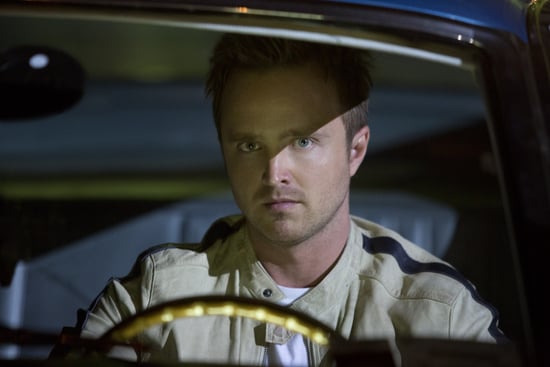 In a trailer for the movie, you get a lot of the story of Tobey's cross-country race — and you can marvel over a lot of these impressive stunts and be assured that much of it is real.

When we chatted with Paul, he told us about how much driving he was doing and why that was so important to the director: "Scott made it very evident before I attached myself to this that he wanted me to be driving. He wanted all of the things, all of the action sequences to be practical. He didn't want all of this to be done behind a computer after we shot it all. So he's like, 'You're going to have to be behind the wheel and doing all these crazy races.' I was like, 'That's fantastic! Let me do that!'"

Waugh, who is a former stuntman himself, explained, "My Mantra is 'do everything practically'" and that it was actually hard to figure out how to make everything look as real as it was while filming the characters behind the wheel. "I wanted to make sure there were angles that told you yes, we were really doing it. We really made sure that all the angles made you know that these guys are in the car and they're really driving."

Read more about Need For Speed after the jump. 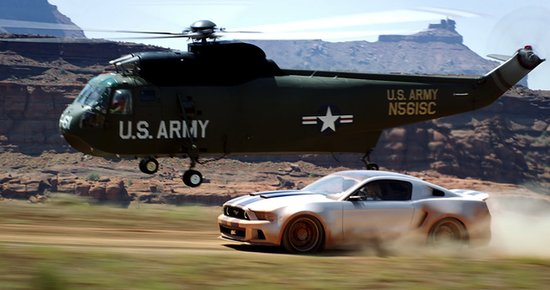 Producer Sourian told us that Waugh's devotion to the racing and stunts being real gives the movie "a sense of authenticity," so the audience will know they're seeing "real cars, real driving — not CGI — but real stuntmen in these cars doing very elaborate stunts." Gatins, who wrote the script, told us that so far the audiences who have seen the movie contained kids who "freaked out" about it being real. "They were like, 'Oh my gosh, we've seen all those other movies; like, yeah, they're cool, but this is so different, because I could tell those are real cars.'"

Paul is also one of the fans of how the movie turned out: "That's what's so great about this movie. The audiences don't like to be lied to, and Scott's like, "I want this to be practical. I want people to sit and watch this movie and say, 'Holy sh*t! They actually did that!' And we did. It was a blast."

Netflix
March Means One Thing For Netflix Fans: More Movies and TV Shows Are Leaving
by Grayson Gilcrease 21 hours ago