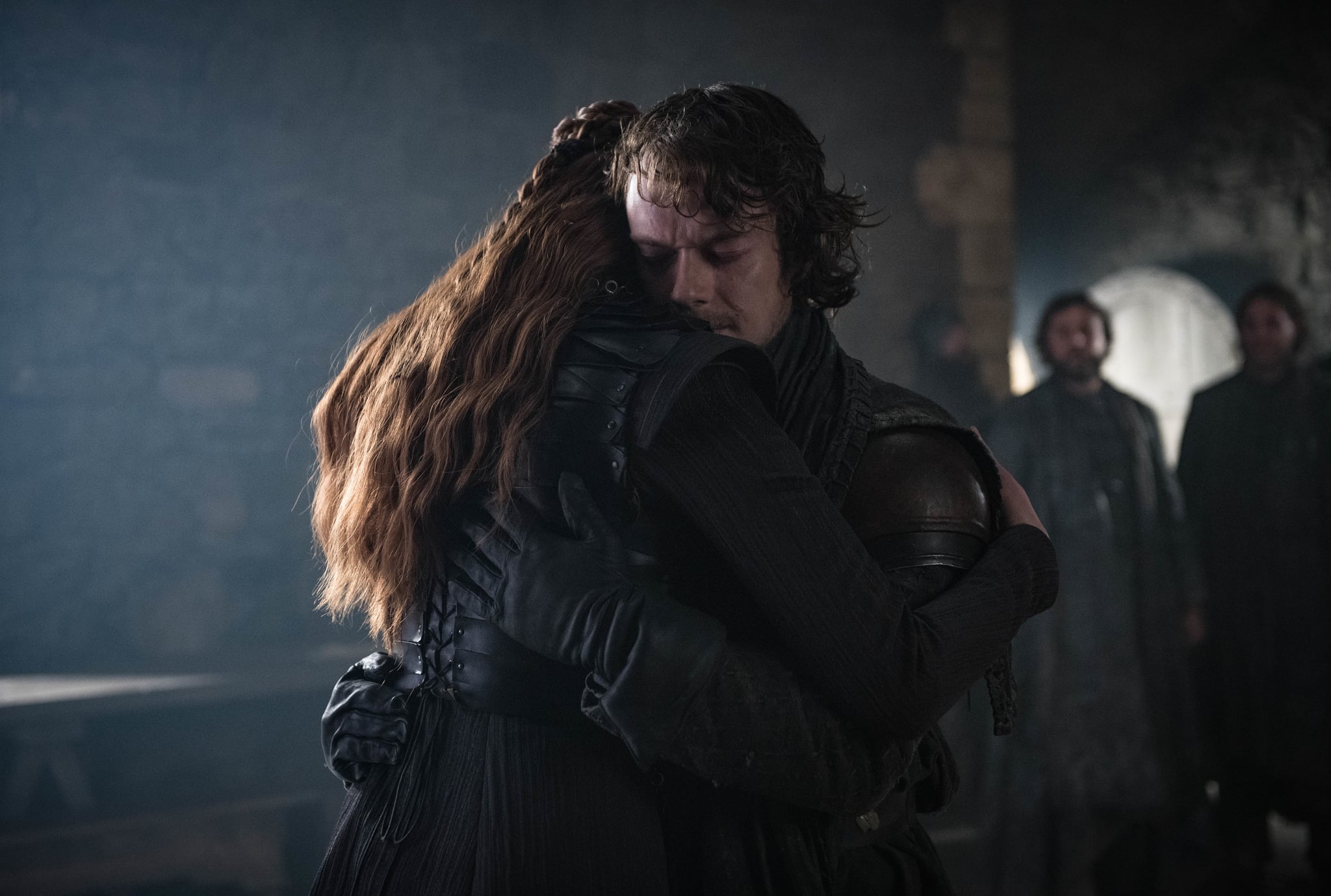 At this late stage in the series, we didn't think Game of Thrones could make us root for a new couple. But then Sansa ran into a crying Theon Greyjoy's arms, and we instantly wanted these two to have a happy ending together. Could romance even be in the cards for the Lady of Winterfell and the Stark ward? Ned Stark raised Theon as one of his own, but in season two, the Greyjoy heir chooses to betray Robb Stark and take Winterfell to prove himself to his biological father. He's more than paid for his sins since then, but he and Sansa would still have a long road ahead of them in terms of building a healthy relationship — and that's making the completely unsafe assumption that they'll both survive the Battle of Winterfell.

Right now, Sansa's joy at seeing Theon again seems to be rooted in having a member of her family back who truly understands what she went through with Ramsay. Theon is there to witness every awful thing Ramsay did to her, including her rape on their wedding night. That's because he tortures Theon and forces him to be "Reek" — a broken version of himself. In season six, they escape his reign of terror together, but while the eldest Stark sister sets off to reunite with Jon, Theon still believes he needs to be with his sister Yara in the Iron Islands.

He's made his choice for good now. Theon is ready to die defending the Starks, and Sansa is overjoyed to have him home. What's unclear is whether or not either of them is ready to start a relationship at this point in time. The reigning Lady of Winterfell is more powerful than she's ever been, and her focus is on protecting the North, whatever the cost. After Joffrey and Ramsay, she seems disillusioned with the idea of love. Instead, she's charting her own course, and even cautioning her brother, Jon Snow, not to let his heart overtake his brain where Daenerys is concerned. A younger Sansa may have viewed Theon returning to fight with her family as a grand gesture, but the older and wiser Stark sister understands the complex history that brings Theon home to Winterfell again.

Related:
29 Times Game of Thrones Actually Made You Smile

For his part, Theon is still learning how to live with PTSD (even though that's not something they have a word for in Westeros), and if he survives the war, he'll also have to cross a hurdle similar to the one that Greyworm faces when he falls in love with Missandei. Because of Ramsay, Theon's a eunuch, and while we know that doesn't change the fact that he's a man capable of giving and receiving love, he may not be there yet. The show likely doesn't have time to tackle those issues in depth, but despite all of that, seeing Theon and Sansa end the series as more than friends would be an unexpected but beautiful ending for two people who have been to hell and back together.

To see them survive and thrive after years of abuse and torture would send a powerful message about how survivors can go on to have amazing lives. Theon and Sansa also benefit from having a deep foundation to build upon. Aside from what Ramsay did to them, they grew up together. They knew each other as sweet Summer children, and now they have a chance to discover who they are as Winter-hardened adults together. There are no guarantees in the world of Game of Thrones, but if Sansa and Theon's reunion does blossom into something more, it could lead to a strong and rewarding relationship for them both and a satisfying conclusion to their stories for those of us watching at home.