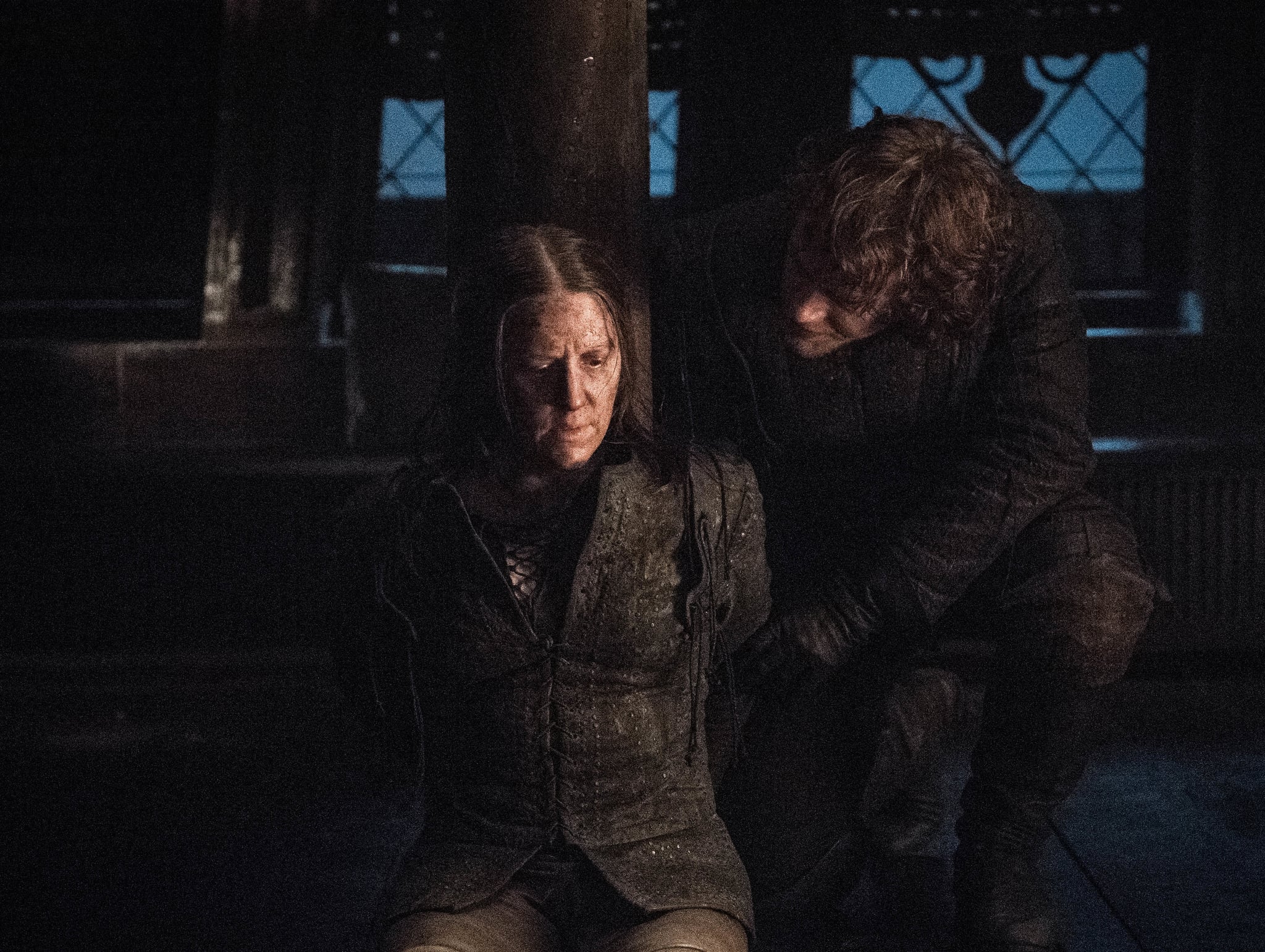 Warning: Big spoilers for Game of Thrones below!

Over the years, Game of Thrones has whittled down its great houses to just a handful of remaining power players: the Starks, the Lannisters, and the Targaryens, plus each of their allegiant smaller houses. It's easy to forget that we've got a whole storyline still going for the Greyjoys, a divided house whose younger members are on the side of the Targaryens and Starks, while the current head of the house is loyal to Cersei Lannister. In the season eight premiere, the long-suffering Greyjoy siblings, Theon and Yara, reunite, but it's more headbutts than hugs and happy families — and here's why.

In the premiere, we see Theon and his crew invade the ship where Yara is being held captive and rescue her, but it's partially his fault that she was there in the first place. Back in season seven, the Greyjoy siblings were headed to Dorne with Ellaria Sand when they were overtaken by their uncle Euron. Yara is taken captive, even though she and Theon both put up a good fight, and Euron dares Theon to try to stop him. Upon seeing his soldiers being tortured by Euron's men, Theon's old despondent, cowardly self resurfaces, and he jumps overboard, leaving his sister behind. He eventually reunites with Jon Snow, with whom he shared a childhood, and attends the parlay with Cersei. At the meeting, Euron again tries to force Theon to swear fealty by dangling Yara's fate in front of him, but Theon again refuses.

Theon's cowardice finally turns around again when he's forced to face off against Harrag, one of the last remaining captains loyal to Yara. Harrag blames Theon for Yara's imprisonment and fights him when he comes looking for supporters to rescue Yara. However, he's able to defeat her when she relies on attempting to kick him in the groin (it doesn't have the desired effect, since he was long ago castrated by the sadistic Ramsey Bolton), and he earns the respect of the remaining loyalists, rallying them to his mission. It is, presumably, these same Ironborn loyalists who accompany Theon to free Yara in the season eight premiere. While we can definitely appreciate Yara's mildly violent reaction to seeing her wishy-washy brother again, we have a feeling that both Greyjoy siblings might be pivotal to helping turn the tide for the new Stark/Targaryen alliance in this final set of episodes.