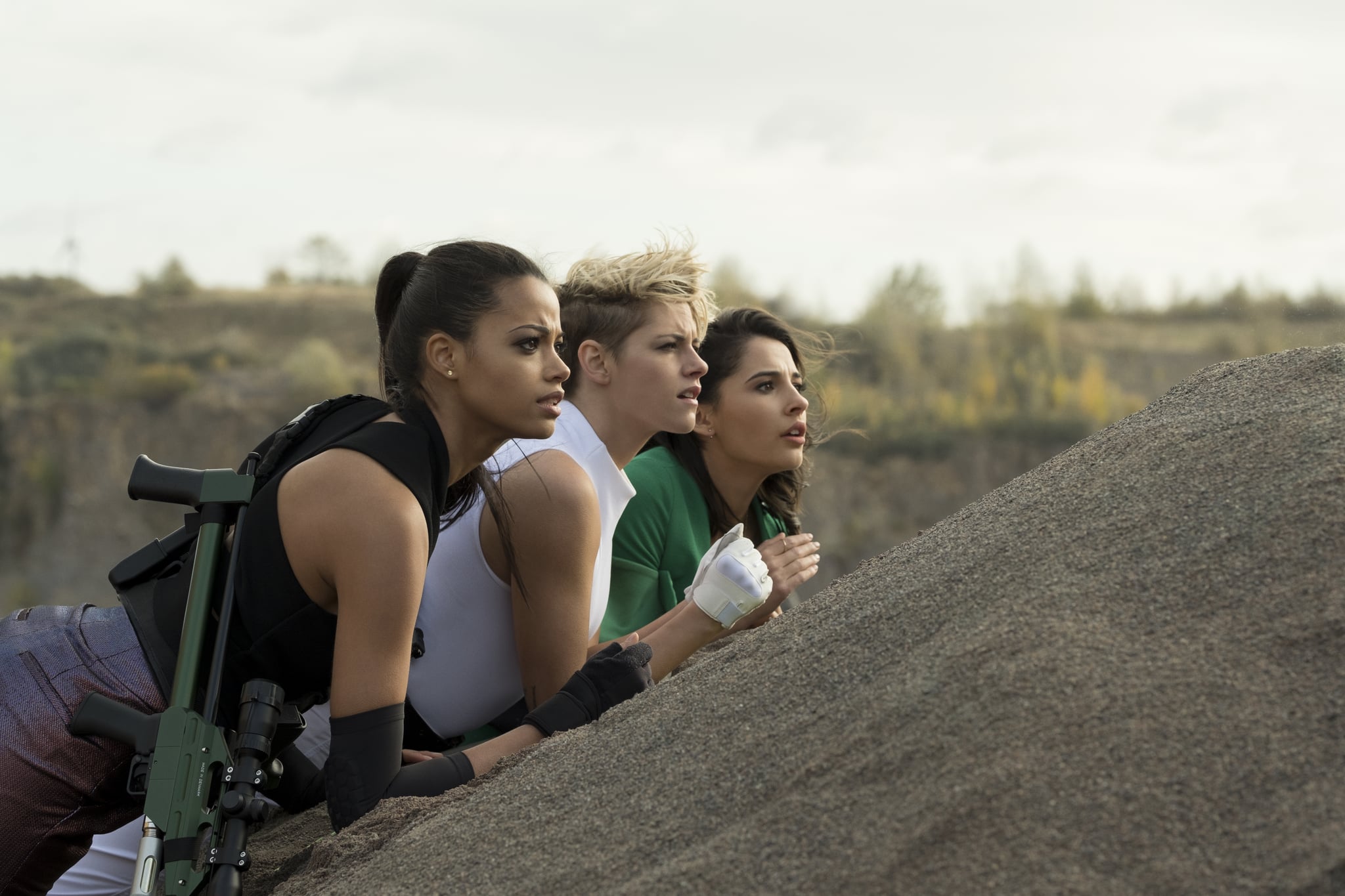 It's been over 40 years since we were first introduced to the Townsend Agency, and in 2019, that private detective organization has taken on a whole new look. Charlie's Angels may be the latest installment in a long line of TV shows and movies in a well-known franchise, but it definitely stands out among its predecessors. In November 2018, POPSUGAR got to visit the Berlin set for the film and learn all about the ins and outs that make this movie so different from the rest.

First things first: don't call it a reboot. While speaking with producer Max Handelman, he made a point to emphasize that the film is a continuation of the franchise, rather than an attempt to discard all continuity in the established series. You can also expect the new film to take into consideration how different 2019 is from 1976.

"America was a different place than it is in 2018, and women weren't in places in the '70s that they are 40 years later. So this movie is not a reboot . . . in fact, it's very much honoring the original legacy of the Charles Townsend Agency and what that all means," he said. "[Elizabeth Banks]'s take on [the franchise] is that the Agency has become a global intelligence, security, and espionage agency. There's no longer just three Charlie's Angels. There are teams of Angels stationed all over the world, and they can travel anywhere they want and can be anywhere they need to be."

Related:
The New Charlie's Angels Trailer Is Just Women Kicking Ass, and We LOVE It

In previous iterations, audiences are made aware that other Angels exist but that they always came before the current trio rather than them working together (see: 2003's Charlie's Angels: Full Throttle with Demi Moore playing a fallen Angel). Branching out is a natural step for the agency when you consider how the Angels' missions take them all over the globe — why wouldn't they go bigger?

This also comes into play with the role of Bosley, who has been transformed from a single liaison between the Angels and their spy agency to being a rank in the organization with multiple people using the name, like lieutenants. One such Bosley is played by director/cowriter/producer Elizabeth Banks.

"I really felt like I could make a global movie about women working together that could be really entertaining and cool."

When we spoke with Banks about her modern iteration of the Angels, she revealed that her decision to tackle the relaunch comes from a personal enjoyment of the franchise. "I've always loved Charlie's Angels — I loved the TV show and I loved the films," she said. "I wanted to tell a female-fronted story, and I felt like it's a brand name that is meaningful to women and girls, but also highly entertaining to all audiences. I really felt like I could make a global movie about women working together that could be really entertaining and cool. I wanted to cast a movie with really fresh faces, and I wanted a global audience to feel like they could see themselves in the film." 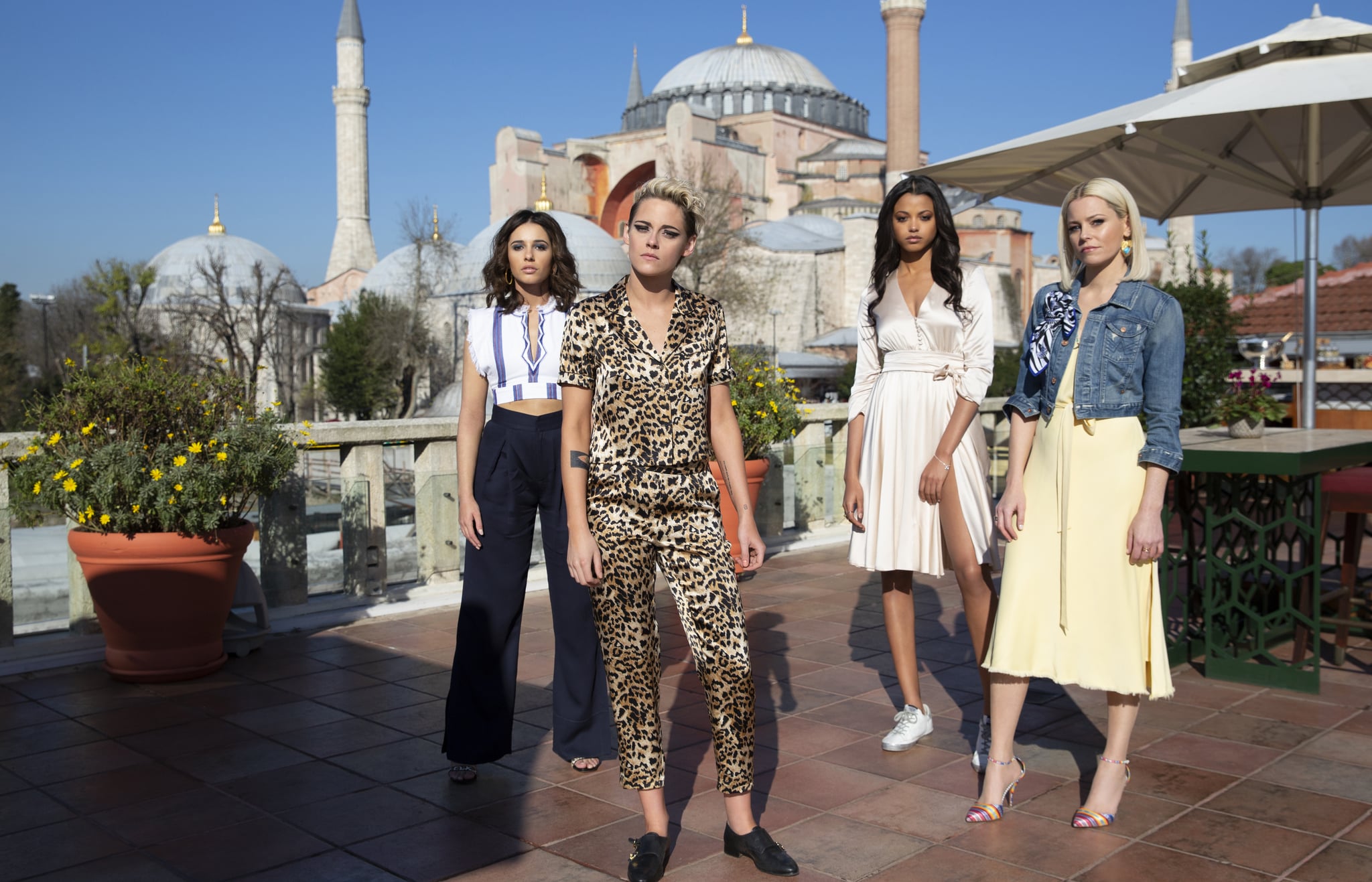 Those fresh faces are new to the genre, though one is arguably way more familiar than the other two. As Handelman explained to us, we start off the film with two Angels: the wild Sabina Wilson, played by an unexpectedly high-energy Kristen Stewart, and former spy Jane Kano, played by big-screen newcomer Ella Balinska. The two are fierce ass-kickers who are assigned to the case when a young systems engineer named Elena Houghlin (Aladdin's Naomi Scott) discovers some dirty business with new technology made by her company. When she attempts to report the problem through the proper channels — which include her boss, played by Hunger Games alum Sam Claflin — she's basically ignored.

"She's not being taken seriously, and so she ultimately goes to the Townsend Agency for their aid in helping air this discovery she's made. And that's where it starts the movie," Handelman explained.

Elena's introduction to the Angels leads to her own journey of empowerment and the decision to take more control over her narrative. Her arc from client to Angel — which involves working with the elite team to keep her technology from getting into the wrong hands — is a big part of the film's central focus of women coming together and uplifting one another to become the best versions of themselves. You could argue that every iteration of Charlie's Angels has a similar goal, but there's a decidedly modern element to the 2019 film.

"I wanted to make a movie where women could just be in a room and get stuff done."

"I think what's so exciting is that each film, when it was made, is what it was for its time. That is what is so exciting about being able to bring it into the 21st century — this is the film for now," Balinska answered when asked about modernizing the Angels. "It's one thing being a strong, empowered woman . . . but then the other thing is being able to broadcast that and for people to watch it and be like, 'There is an amazing representation of what it means to be a badass girl.'"

"We have this whole network of women working together and supporting each other, sort of in the name of quote-unquote 'good,' which is just treating people well and being positive and self-affirming, rather than having three superhuman women that are sexy and perfect," Stewart said, explaining how their Angels differ from others. "It's like, 'It's hard to do what we're doing and we're only able to do it together.' When was the last time you saw a movie where a group of women were sitting together and figuring out how to overcome something, how to formulate a plan and be proactive about it?"

That wasn't an unfamiliar sentiment on the Charlie's Angels set; in fact, Banks revealed that the very basis of the film revolves around that idea.

"It's really about how women work together. When I looked around, I tried to find a scene or a sequence in a movie where a bunch of women sit around a table and talk about how they're going to accomplish something. And I found it incredibly difficult to find a film with one," she explained. "I guarantee most of them are in rom-coms, or the women work for a magazine, and there's always a man in the room to help them because god forbid women figure out how to work in the world all by their lonesome. I wanted to make a movie where women could just be in a room and get stuff done."

Considering that even the previous Charlie's Angels movies featured Bill Murray in the role of the bumbling yet still serviceable Bosley (with the late Bernie Mac stepping in as his brother in the second film), Banks isn't wrong. It's obvious that this continuation of the franchise is more than ready to put the "girl" back in "girl power" with a fierceness.

TV
What Is Marvel's Quantum Realm? Here's What We Know
by Victoria Edel 54 minutes ago

Rupert Grint
All Your Questions About "Knock at the Cabin"'s Ending, Answered
by Amber Frost 4 hours ago

Movies
Cassie Lang Is Ready to Shake Up the MCU in this Exclusive "Ant-Man and the Wasp: Quantumania" Featurette
by Victoria Edel 8 hours ago