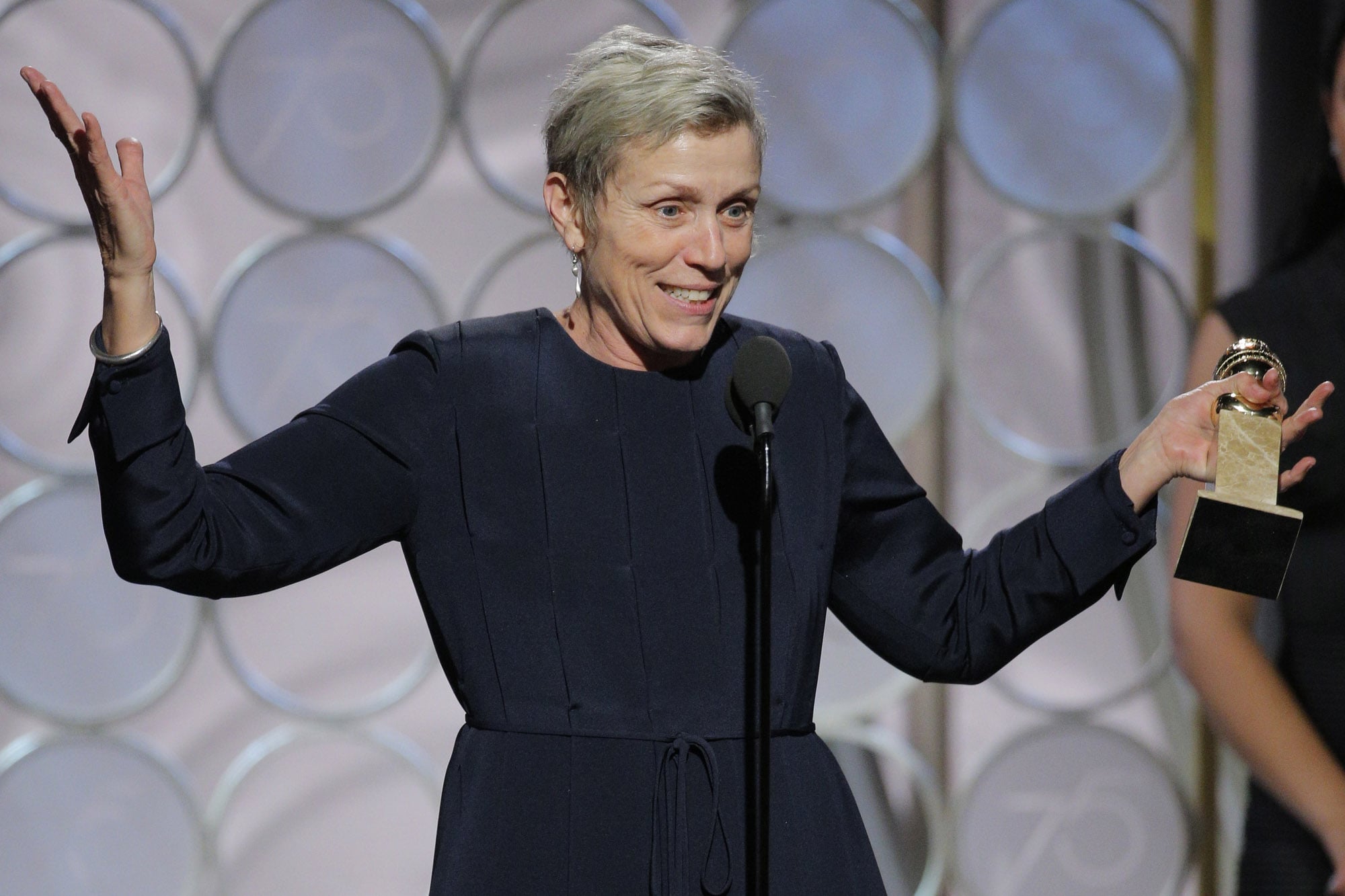 When Frances McDormand took the stage to accept her award for best performance by an actress in a motion picture drama at the Golden Globe Awards on Sunday night, she received a massive amount of cheers from the audience. She was honored for her role in Three Billboards Outside Ebbing, Missouri, and she definitely deserved it. What she didn't deserve, however, was the crazy amount of censoring she received on her speech.

Seriously, if you were watching it seemed like your TV was cutting out based on how many times she was censored or beeped out. Although her speech started out strong and sassy — aka exactly how you'd imagine a speech from Frances — it went downhill fast, or at least that's how it appeared based on the bleeping.

"Well, I have a few things to say. I'm going to keep it short because we've been here a long time and we need some tequila. All you ladies in this category, bar, tequila's on me," Frances began. "Thank you to the Hollywood Foreign Press. I'm still not quite sure who they are when I run into them, but for the last 35 years, but I love seeing their faces. And let's face it, they managed to elect a female president. I'm just saying," she joked.

Let's hear it for our winner of Best Performance by an Actress in a Motion Picture - Drama, Frances McDormand! She's honored for her role in @3Billboards. #GoldenGlobes pic.twitter.com/1bJOBP3YNW

As the speech continued she was randomly beeped, even though she really wasn't cursing. Phrases like "Fox Searchlight" and "shift" when discussing "tectontic shift" were censored as well. Luckily, her uncensored speech is available and we've got the rest of it for you, below.

"Martin McDonagh, you know how I feel about being your Mildred Hayes. Her every ragged inhalation and fierce exhalation is evidence of my gratitude. Our producer, Graham Broadbent, thank you for listening to me and valuing my input," she said before the censoring hit the next line. "To Fox Searchlight, who allowed our film to find its audience and we are still putting people in the seats of brick and mortar cinemas around the country. Call me old-fashioned, but I love that. And have I mentioned my two favorite cowboys, Sam and Woody, because they are?"

5 Times Women Dropped the Mic at the Golden Globes

She continued by thanking everyone who worked on the film and how they brought their best to set every day, which elevated her performance as well.

"Then I will have to list the entire cast and crew of our film because everybody brought their best game to this one. The very best game. For instance, I cannot throw a baseball for shite across a two-lane street. That was really fun but don't try it at home," she continued.

Before leaving the stage she threw in a few sentiments about politics, but ended with a girl power message that was the trend of the evening as well.