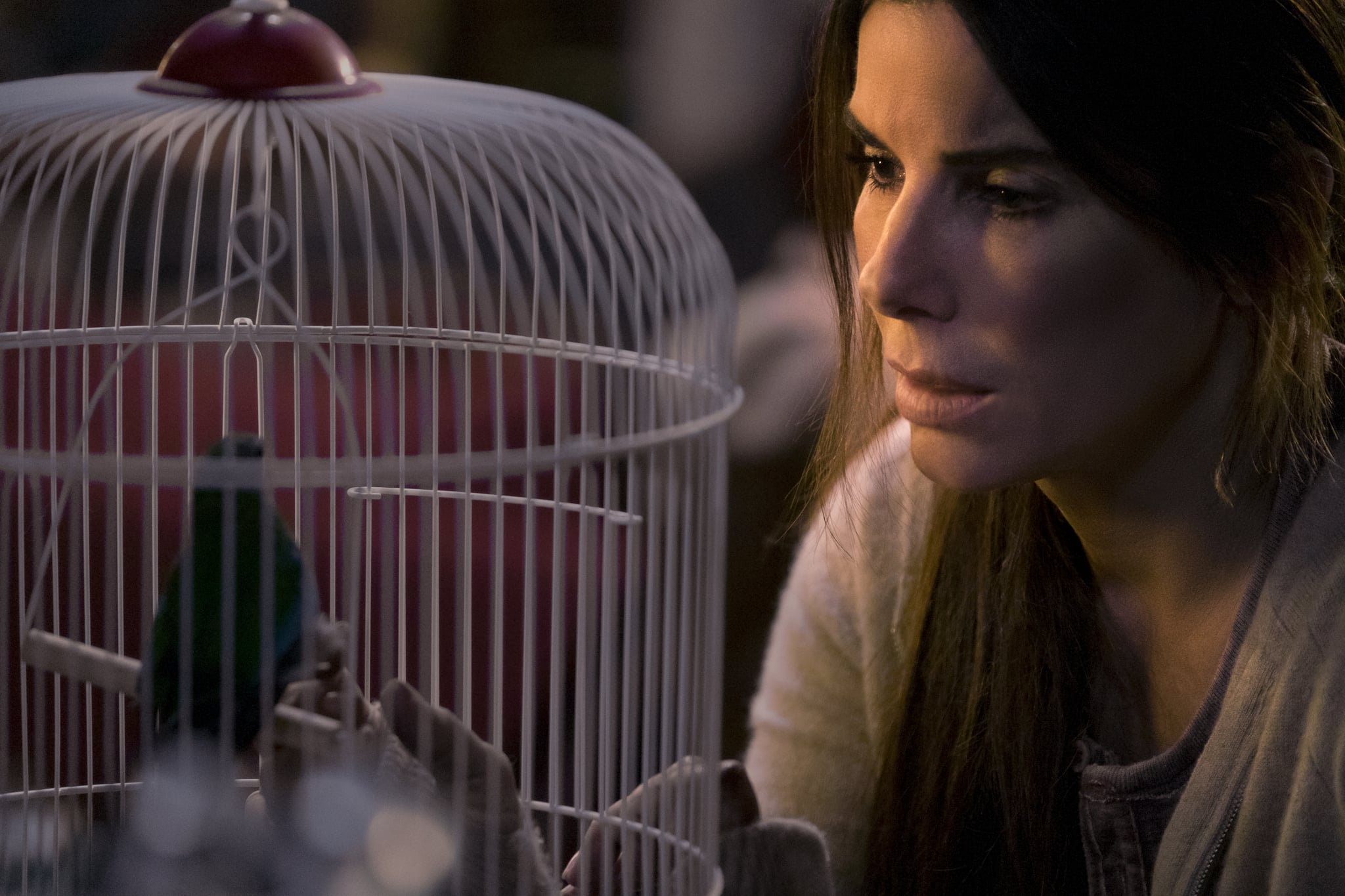 Warning: Spoilers for Bird Box ahead!

Bird Box is one of the more confounding horror movies of recent memory, in that its monster — or monsters, plural . . . maybe? I'm still figuring it out — never actually reveals itself. Over the course of the hour-and-change that our heroine, Malorie (Sandra Bullock), fights for her life, as well as the lives of her two young children, we hear the monster and see the effects of the monster's destruction, plus all the ways survivors are forced to cope with their horrifying new reality. But the monster, whatever it is, remains invisible.

In Netflix's official summary of the film, the monster is referred to as "a mysterious force" that "decimates the world's population." The so-called entity — I'm actually going to take a page out of Star Wars' book and dub it the Force from here on out — does so by making whoever lays eyes on it commit suicide pretty much instantaneously in the most graphic way they can manage (caving their head in on the corner of a desk, walking in front of a dump truck, lighting themselves on fire, etc.). The only way Malorie and her fellow survivors are able to escape its influence is by making their way through the world blindfolded.

Related:
Thrills, Chills, and Plenty of Gore: These Are the 10 Best Horror Movies of 2018

But when a new threat emerges — homicidal people who are driven crazy by the evil Force, but who somehow avoid its suicidal urges — Malorie realizes her only option is to make a perilous three-day journey down a treacherous river to a rumored safe haven. Of course, to do so, she and her kids have to stay blindfolded the entire time.

The film, which is like a cross between A Quiet Place and The Happening (an interesting mix, to say the least), also stars Sarah Paulson and John Malkovich, and is now streaming on Netflix. Whether you've already seen it and still have questions, or would rather go in with a little background on this monster/force/entity/whatever, let me enlighten you.

So, You're Saying the Force Is Invisible?

Well, yes. Technically. It can physically move things, or at least has a strong enough energy pulsing around it that it can blow leaves off the ground (like wind) and create a static effect with human hair, as we see in a later scene with Malorie's adopted, nameless daughter. It also seems to have a bit of a shadow whenever it sweeps by windows. By the end of the film, we discover that the Force can also mimic human voices to trick people into opening their eyes and seeing whatever it is. There are also instances of the Force being strong enough that it bangs on the roof of a car (the car's sensors also beep when the Force gets close), and it pushes Malorie and her kids around in a tense scene.

If It's Not Truly Invisible, What Do You See When It Reveals Itself to You?

We never witness what others see, but there are a few clues that suggest it either presents itself to someone as their ultimate sadness or fear. For instance, after Malorie's sister, Jessica (Paulson), sees it while driving, her eyes immediately flood with tears and she crashes the car, before limping out in front of a truck to end her life. We see something similar happen to the wife of Malkovich's character, Douglas, when she dies running outside to help a wounded, pregnant Malorie. "Mom?" she asks, staring at empty air, before her eyes glaze over — after a person "sees" the Force, their eyes blossom into a creepy, bloodshot kaleidoscope of oranges and browns — and she gets inside a burning car, igniting immediately. Douglas later tells Malorie that her mother has been dead for years.

What If You Look at the Force Through a Video Camera, iPhone Camera, or TV Screen?

Still a big ol' bowl of murderous nope! The survivors in the film actually try this trick, with BD Wong tying himself to a computer chair and attempting to get a glimpse of what's outside by looking at a computer monitor that's hooked up to the security cameras in the backyard. Apparently the Force is tech-savvy, sadly, because before long, Wong's character willingly caves his head in on the desk in front of him.

Is There a Reason Why People Like Gary Can Look at the Force Without Killing Themselves?

Gary, played by Bohemian Rhapsody's Tom Hollander, arrives at the sprawling home where Malorie and the rest of the survivors are staying, banging at the door and begging to be let in. Sweet-natured Olympia (Danielle Macdonald) opens the door for him without consulting anyone one else, and at first, it seems like Gary will be a fine addition to the crew (despite Douglas's very loud objections). However, before long, it's revealed that Gary is one of the few human beings out there who can survive after seeing the monsters. Why? Well, it's not exactly clear. We get hints that the people who can look at the Force and not commit suicide suffered from mental illness before the monsters arrived (Gary mentions that he was institutionalized). That doesn't mean they get off scot-free, though — rather than killing themselves, they begin zealously worshiping the Force, and try to force other survivors to "look" at it (to the point of holding others' eyelids open, yeesh).

Gary's arrival is also the only clue we get about what the Force might look like, at least to him; he comes equipped with a folder full of charcoal drawings of ridiculously creepy creatures, with too-long legs, screaming mouths, razor-sharp teeth, and even some that look vaguely like bug-human hybrids. Essentially, they look like demons. While it's pretty obvious that not all the creatures present themselves the same way to people (ex: Douglas's wife seeing the image of her dead mother), Gary's rendering of them might be their actual form.

Do You Know Where It Came From?

Hell? Space? We never find out.

Is There a Way to Defeat It?

The only way to prevent against running into the Force is by blindfolding yourself (or going old school and simply closing your eyes) and keeping a bird nearby. The titular birds of Bird Box actually serve a pretty important purpose — they can sense when the Force is close and start chirping in distress. Other than that, there doesn't seem to be an actual way to defeat it, or even fight it at all. We'll just have to let the writers of the inevitable Bird Box 2 figure that one out.