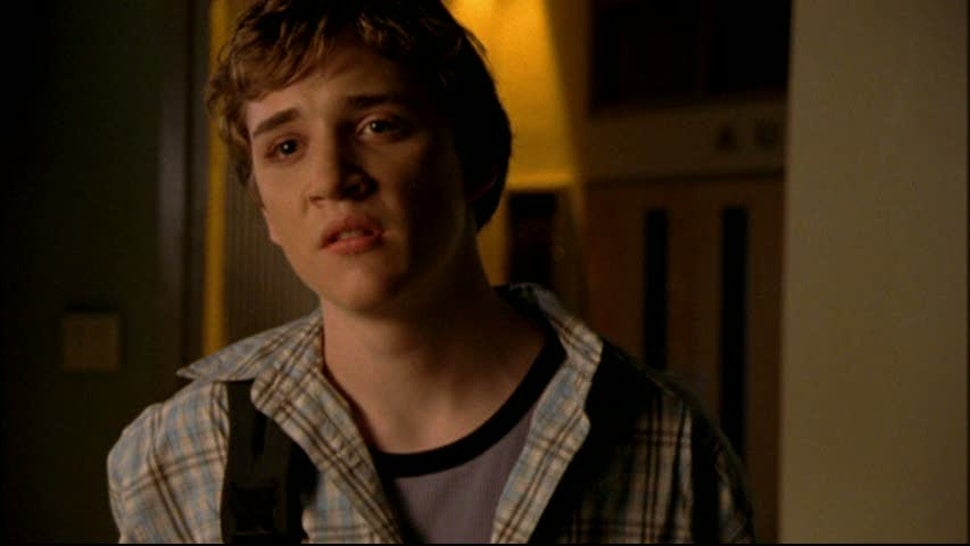 Now that the fourth season of Veronica Mars is streaming on Hulu, you might find yourself wishing that you'd binged seasons one through three (and the movie!) before diving into the new episodes. After all, there's a lot to remember about how Veronica (Kristin Bell) got her start as a sarcastic private investigator in Neptune, CA. Like, who killed Lilly Kane? Did the theme song always sound like that? And what was the whole deal with Cassidy Casablancas again? If the latter question is boggling your mind specifically, we're breaking it down below. Just be warned: spoilers for seasons one and two of Veronica Mars to follow!

Related:
As a Reminder, This Is How the Original Veronica Mars Series Ends

As a reminder, Cassidy "Beaver" Casablancas (played by Kyle Gallner) is Dick Casablancas' younger, far dweebier brother. Dick and Logan frequently pick on "Beav," who's intelligent, but quiet and socially awkward. He seems to brush off the taunts and ridicule, focusing instead on building a real estate business in the image of his father, and later starting a romance with one of Veronica's closest friends, Cindy "Mac" Mackenzie (Tina Majorino). Unfortunately, Cassidy's true motives are exposed in season two, when it's revealed he played a major part in two traumatic incidents in Veronica's life: her rape at Shelly Pomroy's party, and the bus crash that kills a number of Neptune High students in season two.

Let's start with the bus crash in season two. Veronica witnesses the immediate aftermath since it happens on the way home from a field trip to the local baseball stadium, which is owned by baseball fiend and Mayor Woody Goodman (Steve Guttenberg). While Veronica's close friend, Meg, is killed in the crash, a group of male students who died prove to be the key to figuring out who engineered the tragedy. Apparently Woody had been sexually assaulting boys on his little league baseball teams for years, and the now-teenagers decided to out the clean-cut mayor. Unfortunately, Cassidy, who was also one of Woody's victims, decides that he'd rather the incident remain under wraps.

Terrified of what happened to him as a kid being revealed, Cassidy decides to take the other victims in his grade out — he plants a bomb on the bus and sets it off remotely from his cellphone, sending the only living souls who could out Woody to a watery grave. Veronica ends up putting this all together after a surprising revelation: she finds out from a doctor that she has chlamydia. So, how does that relate to Cassidy, Woody, and the bus crash? Well . . .

One of the tragic mysteries in the first season that Veronica attempts to solve is who raped her (drugging her, taking her virginity) at a classmate's party. The event happens before the first season's story picks up, and we only ever see it in flashbacks. While Veronica finds out that she and her on-again, off-again boyfriend Duncan Kane slept together that night (they were both heavily intoxicated, with both barely remembering what happened) and initially feels slightly better about the situation, she's also handed some troubling information: Dick saw her passed out after Duncan left the bedroom at the party, and pushed Cassidy onto the bed so he could take advantage of Veronica as she slept (yet another one of Dick's attempts to make Cassidy "be a man"). She confronts Cassidy but he denies it, saying that he refused to acquiesce to his older brother's gross prodding.

So, flash forward to season two: a doctor tells Veronica that she has chlamydia, which sets off alarm bells since the files she has on Woody Goodman reveal that he also was treated for the STD. Putting two and two together, Veronica realizes that Cassidy was lying — he got chlamydia from Woody, and gave it to Veronica when he raped her that night. Veronica figures all of this out as Mac is alone with Cassidy in a hotel room, so she races over to the Neptune Grand to rescue her friend. That's what brings us to Cassidy's suicide.

Related:
Before You Binge the New Season of Veronica Mars, Brush Up on the Show's Original Mystery

Veronica and Cassidy end up confronting each other on the roof of the hotel, where she accuses him of raping her and rigging the bus crash. He admits to it all, and also tells her that he planted a bomb in Woody's plane, which explodes in the sky above them, instantly killing Woody and everyone else inside. Since Veronica thinks her father is on the plane at the time, she threatens to shoot Cassidy with a gun, but Logan arrives and calms her down. As for Cassidy, he walks over to the edge of the building and asks Logan to tell him a reason why he shouldn't jump. Logan struggles to come up with something, and Cassidy leaps to his death.

Understandably, the moment has ripple effects well into the third season. Cassidy's brother, Dick, struggles to come to terms with what happened. His bond with Logan is strained for months until the duo repair their friendship when Dick gets kicked out of student housing at Hearst College and Logan takes him in. By the end of the series Dick is somewhat redeemed, morphing into a lovable idiot rather than staying the despicable, misogynistic ass he is throughout high school. At least someone from the Casablancas family is, right?

Netflix
If You Think Kreese Is Evil on Cobra Kai, Wait Until You Meet Terry Silver
by Sydni Ellis 2 hours ago