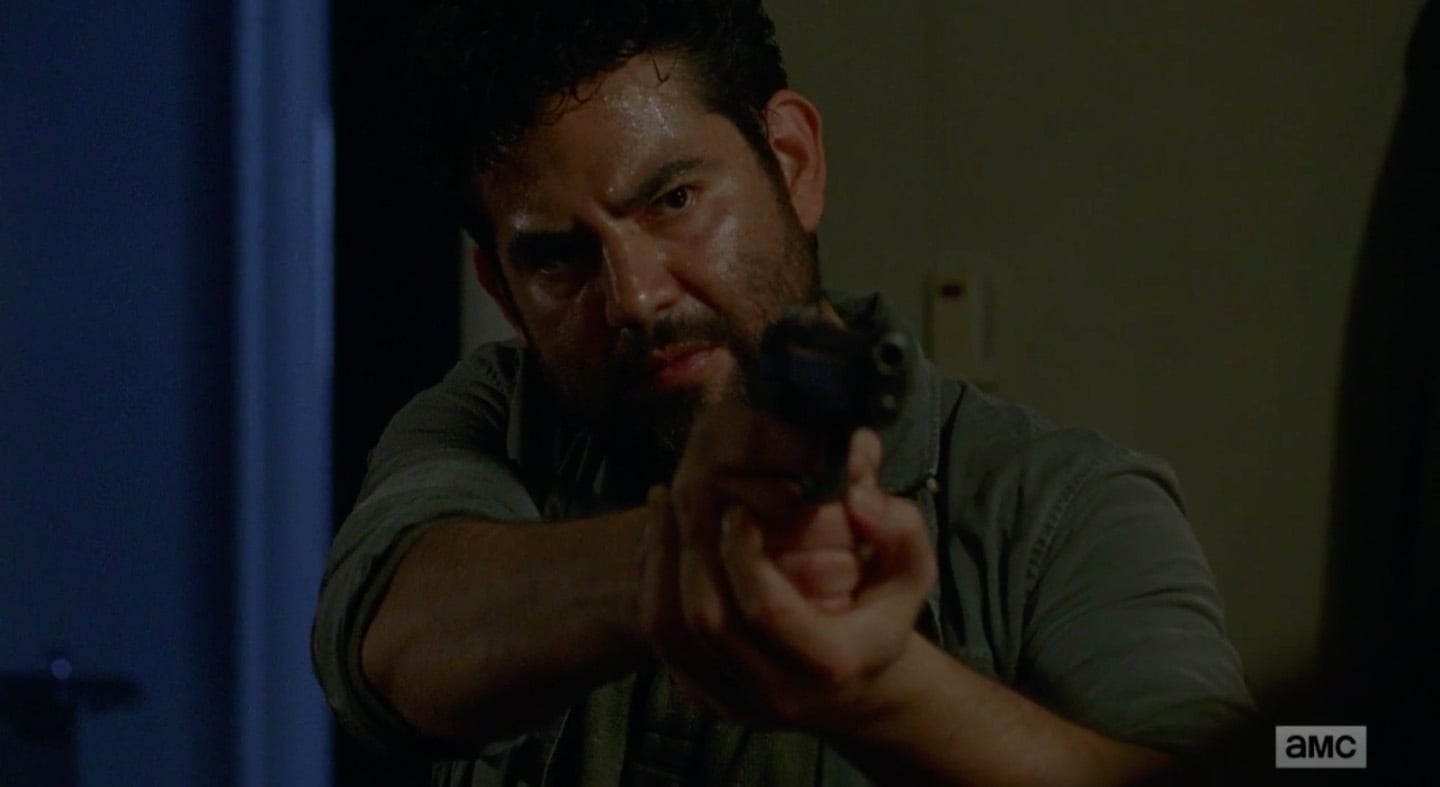 It's no secret that Rick Grimes has a serious soft spot for children on The Walking Dead. He has got two kids of his own, has a great shot at being named godfather to Maggie's bundle-to-be, and, you know, he just generally wants a better world for not just his generation of survivors, but the next.

So, when he's midway through his Savior satellite station storm in this week's episode and spots a baby — whose name is Gracie and who has a more-than-metaphorical mirror above her crib — he's almost instantly disarmed.

Whereas non-dad-mode Rick would normally be on high alert in this field-op situation and check every nook and cray of any given room, he's no longer watching his own back as he looks at a family photo laying around (presumably to see if he's just strangled this poor baby's dad to death).

Related:
How Morgan Is Already Living on Borrowed Time on The Walking Dead

He's clearly crushed at the realization that, yes, all this compound-storming he's initiated may have very innocent victims like little Gracie here on the receiving end of all those bullet-and-walker raids. Just as he appears to rethink his take-no-prisoners strategy here, he turns to find a gun pointed at his own face. It belongs to a character who's been missing for so long that Rick literally has to tell us all who this guy is by name so we can refresh ourselves on his new captor before next week's episode: Morales.

So, who is this Morales who's gotten the better of Rick (for now) and decided to sic the Saviors on him and his attack squad?

Well, you might remember him from the show's first season, when he allies with Glenn, Daryl, and the rest of the Atlanta survivors to scavenge for supplies and huddle for safety alongside his wife and two daughters.

His short stint on the show is marked with subtle quirks, like the fact that he still wants his watch to work even though time is mostly irrelevant in their situation. However, once a walker invasion of their refuge camp threatens the lives of everyone onsite, he opts out of taking his family on the road to the CDC where Rick and the rest are heading to try and find answers (ah, the good old days when there was still hope of government intervention here).

Related:
That Guy Carl Met on The Walking Dead Is Way More Significant Than You Think

He tells Rick he's heading east to Birmingham instead of joining them on the road to Virginia. They've got family there, and they aren't as interested in the group's mission as the rest. There are no hard feelings between himself and Rick, however, and in fact, he's given a walkie talkie to reach out to Rick with in case he changes his mind along the way and decides to catch up with them. Evidently, his route got redirected somewhere along the way, because here we are. The fact that he's holding a hand radio as a show of force against Rick is a touch ironic, consider how they part ways in the earliest season.

As for his wife and children, it's unclear where they're at. But considering he only says "that was a long time ago, Rick" in reaction to our sheriff looking at the photo of what seems to be his family, things may not have gone to plan for the Morales brood. To be continued . . .