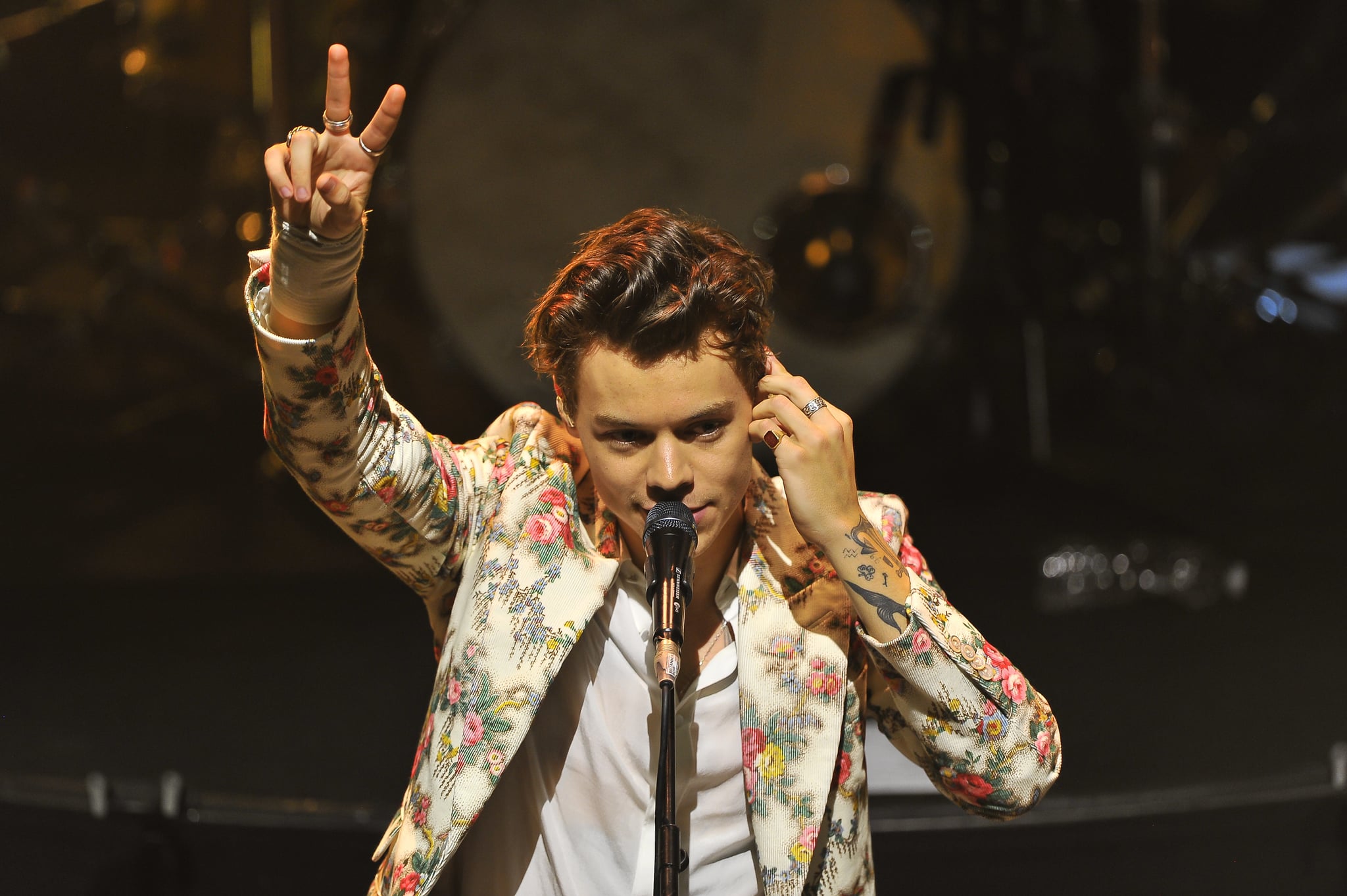 The curtain rose to reveal the man, the myth, the legend — in all his floral-suited glory. I couldn't help (or explain) the giddiness that I felt at the prospect of seeing Harry Styles in the flesh. Except that even when the curtain rose, I still didn't get to see him in the flesh. I could only see him through hundreds of camera phones, since they were blocking my f*cking view.

The first night of the Harry Styles solo tour, I was on the ground level of the relatively intimate concert hall, crammed sardine-style shoulder to shoulder with screaming fans. Trust me, no one was more surprised than I was to find myself in this situation, considering a year or so ago I literally only knew Harry as "the hot One Direction guy who dated Taylor Swift at some point." Sorry Directioners, please don't come for me.

Anyways, what can I say? He shed the boy band thing, turned up the British rocker thing, and the rest was history for me. I went from zero to 100 pretty quickly with my Harry obsession (sue me, I really do love his solo music), so it was crucial that when he shimmied his adorable self up to San Francisco for a show, I was there to witness him in all his post-One Direction glory.

Only, I almost didn't get to witness him in all his glory the entire night, thanks to — surprisingly — his own fans. His fans, and their f*cking phones.

Related:
At His First Solo Show, Harry Styles Honored One Direction in a Major Way

Full disclosure, I grew up in a generation where the coolest thing about my Nokia phone was that I could change out the covers on it to reflect my every whim. Even now after years of it being the norm, the draw of documenting every single moment of our lives on social media completely baffles and infuriates me. I want to eat my food, not photograph it.

At this concert, I truly couldn't believe how absent every single person in the crowd was.

But at this concert, I truly couldn't believe how absent every single person in the crowd was from what was happening right in front of them.

It was a sea of phones held up for the entirety of songs, pulled from the air only to send a Snap or to hurriedly add yet another slide to their Instagram stories. At first I thought that maybe everyone just wanted to get in a shot or two at the start of the show, or perhaps grab a snippet of their favorite song to share with their friends. But no, literally everyone was recording full songs.

Were these people even enjoying the music? Did they notice the details on Harry's two-piece suit, or see the indentation of his (ridiculously, painfully adorable) dimples when he flashed the crowd one of his characteristic grins? Could they taste his tangible nerves, or feel his genuine excitement when we cheered louder for his new music than for his old hits? I really don't think so, because they were too busy looking at it all through their phones instead of watching it unfold before their actual eyes.

At first it made me incredibly furious (they were blocking my view, after all), but then it just made me really sad.

Maybe you're thinking "it's just part of this generation." Maybe I seem out of touch. Maybe I sound like a cranky old woman. Maybe I'm mad because my calves are still aching from standing on my tiptoes for two full hours. I don't accept that. First of all, it's insanely rude to ruin other people's experiences for the sake of your goddamn Instagram. But more importantly, it's thoroughly disheartening to watch moments that are truly special fly by completely unnoticed, all because of this inexplicable pressure to prove we're doing something worth showing off. It's pointless.

Concerts are experiences that stimulate so many senses in the best possible ways; the feel of bass vibrations beneath your (probably sticky) feet, the sight of colorful flashing stage lights, the touch of shoulders between strangers who, for just one night, become friends united by the love of one person, or one band, or one silly song you both love so much, it hurts.

The feeling you get from one "like" on social media is fleeting. Memories last. The next time you're at a concert, take mental photos instead of iPhone ones. Put your phone away and relearn the art of living in the moment. It's a beautiful thing.

APIA
I’m Finally Embracing My Samoan Culture. Why Can’t the Media Do the Same?
by Honestine Fraser 16 hours ago