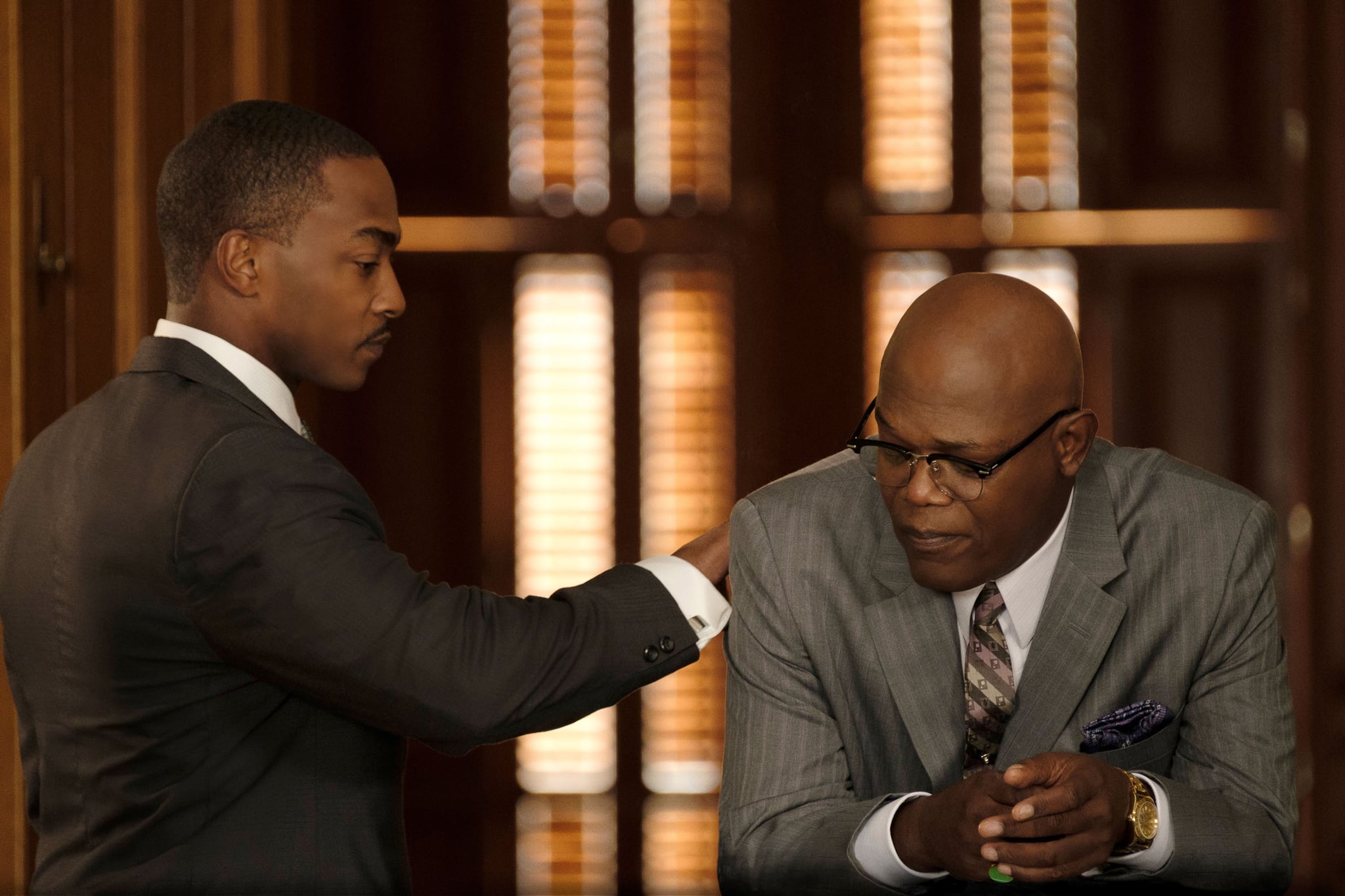 If you've been dying to see The Banker, you might be kept waiting a little while longer. Written and directed by George Nolfi, the drama film follows the true story of Joe Morris and Bernard Garrett, two of the first African-American bankers in the US. Apple TV+ acquired distribution rights to the film in July 2019, and though it was supposed to have a limited theatrical release on Dec. 6 (followed by digital streaming in January 2020), sexual abuse claims leveled against Bernard Garrett Jr. — the son of Garrett and a co-producer on the feature — have put the film's debut on hold. Here's how the drama has played out behind the scenes.

Just four days after Bernard Garrett Jr. took part in a panel discussion hosted by IndieWire alongside director George Nolfi, his half-sister Cynthia Garrett wrote a public comment on IndieWire's report of the panel, claiming that the film misrepresented her family's story. She alleged that her half-brother, who served as a co-producer on the film, developed the project without any input from her or her other siblings and skewed their father's story in a way that omitted them and their mother, Linda, from the narrative. In the comment, she also accused Garrett Jr. of molesting her and her younger sister for years. "No script was ever written 20 years ago," she wrote. "My dad wrote a small book he gave us kids. Truth was what he and my mom wanted. Instead HOLLYWOOD has partnered with our half brother and stolen my mom's story after molesting me and my baby sister for years."

Wednesday, Nov. 20: Cynthia and Sheila Give a Statement

11 days after leaving her comment on IndieWire, Cynthia and her younger sister, Sheila, came forward to The Hollywood Reporter, claiming that the abuse started in the 1970s. The sisters said they kept the abuse a secret from both their family and each other until finally sharing their accusations with each other nearly a decade later. Once they realized they both had been subject to Garrett Jr.'s abuse, they also confided in their mother, Linda, who was Garrett Sr.'s second wife. Sheila said that she even told her father about the abuse, but he wasn't willing to listen. "He kind of, basically, swept it under the rug," she told The Hollywood Reporter. "And when I got married, I told my father I did not want Bernard Jr. there, so my father didn't come to my wedding."

After Apple Originals was informed of Cynthia Garrett's claims via an attorney, they made the last-minute decision to cancel the planned gala screening of The Banker, which was supposed to close AFI Fest on Nov. 21. In a statement, Apple said, "We purchased The Banker earlier this year, as we were moved by the film's entertaining and educational story about social change and financial literacy. Last week, some concerns surrounding the film were brought to our attention. We, along with the filmmakers, need some time to look into these matters and determine the best next steps. In light of this, we are no longer premiering The Banker at AFI Fest." Netflix stepped in and screened Marriage Story in its place.

Two days after pulling The Banker from AFI Fest, Apple announced that the release of the movie — which was scheduled for a limited theatrical release on Dec. 6 — would be delayed to an undetermined time.

Though Garrett Jr.'s name had already been abruptly removed from the The Banker's credits and promo materials, he didn't comment on the accusations until Nov. 25, when he made a statement to Deadline. As well as denying the abuse and claiming Cynthia asked for the rights to their father's story twice and was turned down both times. "These charges against me are deeply humiliating and frustrating because I can never prove how false they are," he said, later adding, "For myself, the best I could do was remove my name from the film and step away so as not to tarnish my father's Legacy, as honoring him and what he stood for was all I ever wanted to do."

Tuesday, Nov. 26: Cynthia Responds With Her Own Statement

A day later, Cynthia responded to Garrett Jr.'s statement with a new statement, which she gave to IndieWire. In the lengthy statement, she stood by her accusation, even providing details about the abuse. "It seems the legal representatives on this film want to position themselves as defending the actions of a child molester," she wrote. "It shows what we have seen from them the whole time — an exploitative orientation of our family." She attributed the statement to "Cynthia & The Entire Garrett Family (except for Bernard Jr)."

The film's director, writer, and producer George Nolfi — as well as cast members such as Anthony Mackie, Samuel L. Jackson, Nicholas Hoult, and Nia Long, among several others — came forward to say they stand by the film and "its positive message of empowerment." While they expressed sympathy for what Cynthia and her sister may have experienced, they noted that the focus of the film was on Garrett himself, not on any of his children. "We set out to tell a story we were very passionate about, recounting the remarkable lives of Bernard Garrett Sr and Joe Morris, and their ground-breaking achievements combating racial inequality in the 1950s and 60s," the joint letter from the cast and crew members read. "Though we have no way of knowing what may have transpired between Mr. Garrett's children in the 1970s, including the allegations of abuse we have recently been made aware of, our hearts go out to anyone who has suffered."

Nolfi went on record to clarify the role Garrett Jr. actually played in the movie's creation, which was — according to Nolfi — pretty minimal. Contrary to Cynthia's claim assertion, Nolfi denied that Garrett Jr. played a creative role in creating the picture and that his involvement amounted to a rights deal. Though Nolfi told Deadline that Garrett Jr. was "definitely part of the press and he had a co-producer credit as part of his original rights deal," Garrett Jr. was the one to suggest they remove his name from the movie as soon as the controversy started.