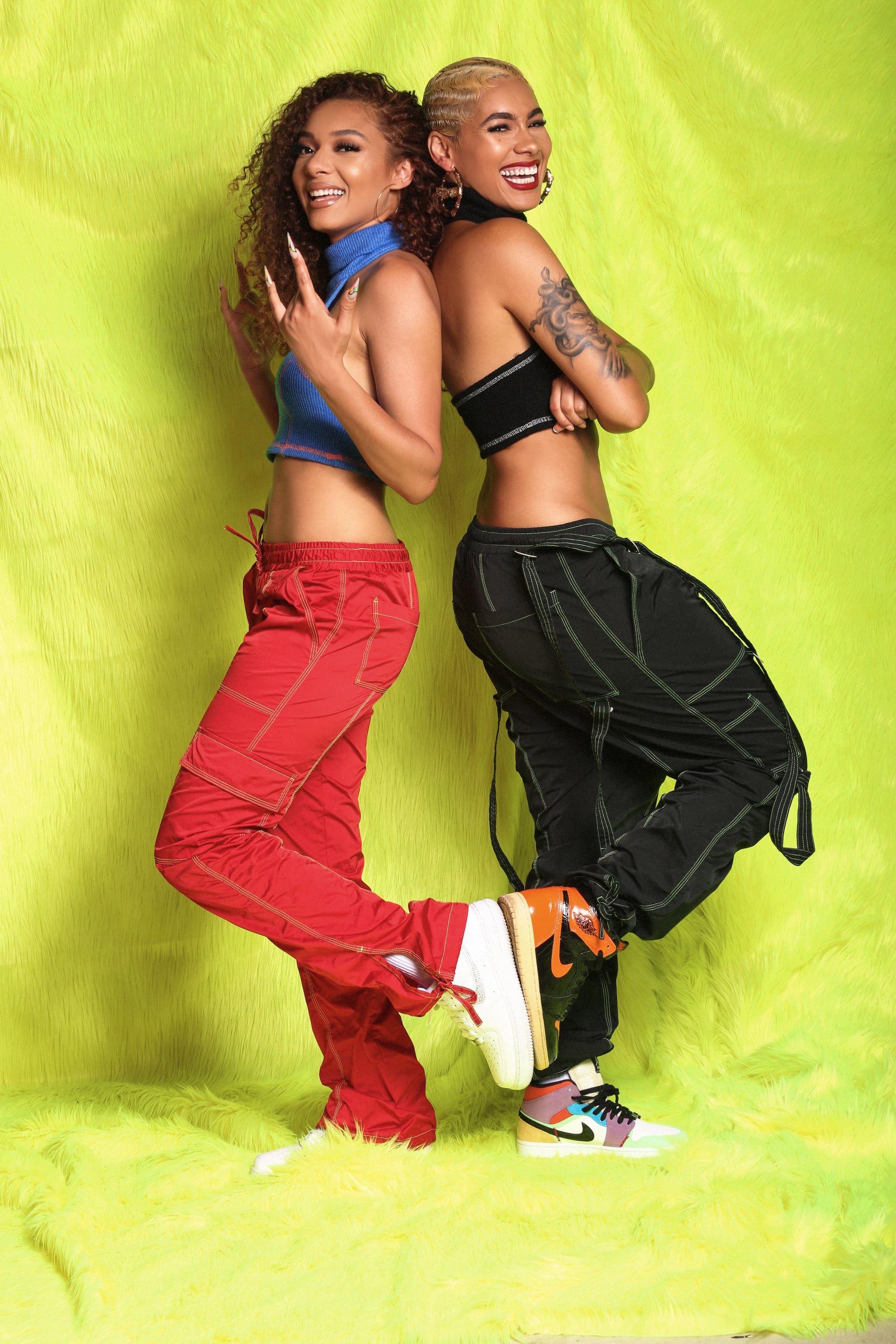 Sister duo Saiyr and Emaza Gibson, known by their musical moniker Ceraadi, can't seem to sit still. There are too many goals to reach, bags to secure, and checks to cash. The rising pop-R&B artists, who are signed to JAY-Z's Roc Nation, have dabbled in a variety of business ventures: collaborating with Rihanna's Savage x Fenty brand, guest-judging on Quibi's dance competition show Floored, running a successful YouTube channel with over one million subscribers. But they're ready to level up and establish an even stronger presence in the entertainment sphere. They hope to accomplish that this fall when they'll unveil an online immersive concert in partnership with the virtual reality platform AmazeVR. The multi-sensory experience will allow fans to enjoy a power-packed performance by Ceraadi without having to leave home.

The pair is also preparing to drop their single "BFF" on Sept. 4. The track will be featured on their forthcoming EP, Get Ready With Me — the anticipated follow-up to their 2019 EP, Ceraadi's Playlist — which has a still-undisclosed release date. In an interview with POPSUGAR, Ceraadi opened up about their whirlwind work ethic, how they filmed a virtual concert, and what to expect from their new music.

POPSUGAR: How do you balance all of these different projects and collaborations?

Saiyr Gibson: Our mom is our manager. She handles everything, and we have a calendar. We're businesswomen, too, so we'll step in and help out. But our mom has it down pat to where we're allowed to be artists and be creative.

Emaza Gibson: Yeah, we have a strong foundation. When you start getting into music, you need a team, and we have a great PR team. Sometimes I'm like, "How are we doing this, though?" Because there is a lot going on, but we manage.

PS: How do you maintain that hustle mentality and stay motivated?

SG: We're just not where we want to be yet.

EG: Our mom always tells us, "You never want to be comfortable." There's a point in time where you can be comfortable, but we just want so much out of life that we always want to do better.

EG: We always listen to music and cling to things that relate to what we're going through. So when we make music, it's like, "What do we want to talk about today? Do we want to be the crazy, angry girlfriend? Do we want to be in our feelings and be crybabies? Do we want to get lit and have fun?" It's a very fun experience.

SG: It's hard to get studio time, especially during this whole pandemic and even a little bit before that because our team wasn't solid then. So, sometimes, we'll plan ahead, and immediately go into the studio and ask for an R&B beat or something and make sure we get everything done before the session is over. Or we'll agree on a beat during a studio session, go into our separate rooms where we'll write, come back, and say what we want to talk about and be like, "Girl, me too!"

EG: We have a song called "OK," and when we were making it, she laid down her verse first. I was getting ready to lay mine down, but I wanted to hear what she had. I was like, "Girl, this is the same stuff that I was talking about." It's great.

SG: We have that telepathy. 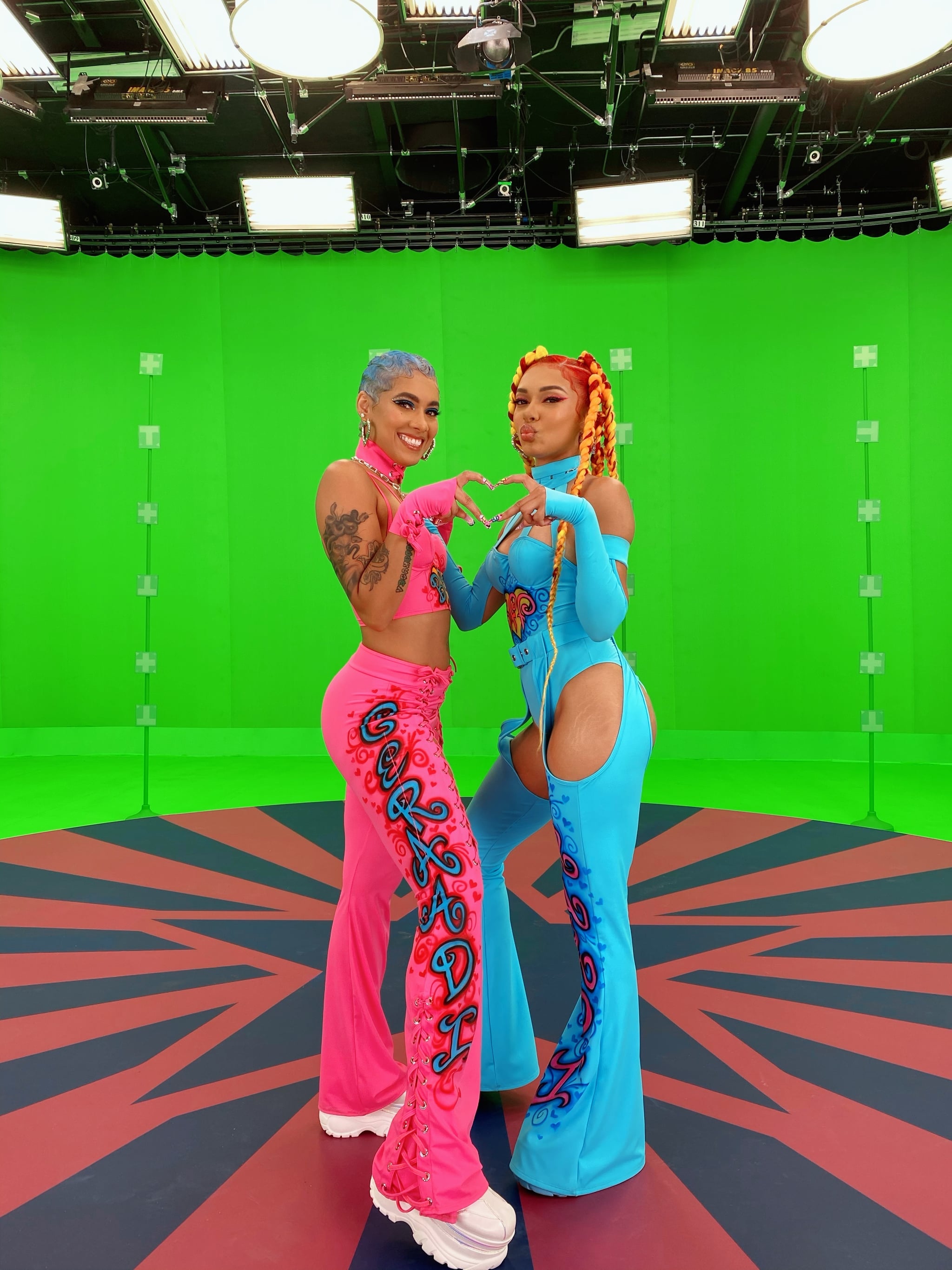 PS: What can you tell me about your upcoming song, "BFF"?

SG: We had Hit-Boy produce the beat, and we worked with Fallon and Felisha [King].

EG: We're into R&B music and girl groups, and they were from Cherish. It was cool to get their perspective as sisters, as well. They're actual twins, but they're also best friends, and then Saiyr and I are best friends, so it was perfect. We need that female-female love instead of us battling against each other. So, "BFF" is a love anthem.

PS: That's funny because when I first heard your music and saw your videos, I immediately got Cherish vibes and thought of "Do It to It." So, I love that you linked up. Now, your virtual concert with AmazeVR is launching this fall. What goes into planning that sort of experience?

SG: Basically, choosing how we want the stage to be — looking at every nook and cranny from the texture to the color — and finding choreographers.

EG: It's crazy, too, because you're dealing with a different type of camera. There are two lenses and you have to look right in between them because you're connecting to a virtual audience. It was pretty tricky, but we adapted well. The whole team was amazing and everyone was so excited.

SG: Also, they can't clip everything together, so we had to run through it perfectly from beginning to end, even with the dialogue.

EG: That also gave it the organic feeling of being at an actual concert.

PS: Where did you shoot the concert?

SG: It was a big green screen where they shot Avengers: Endgame.

"We need that female-female love instead of us battling against each other. So, 'BFF' is a love anthem." — Emaza Gibson

EG: We're going to post pictures soon, so you'll see the stage. We're also going to have a pop-up experience, and everyone will take health precautions so that it's safe. They're going to be able to come to a venue and get the feel of everything. We're excited to be a part of this and blessed because a lot is going on right now, but it's an opportunity to be connected with our audience.

PS: That's amazing. I'm a huge nerd, so I love that you filmed where they shot Endgame.

EG: We touched the ground like, "This is where Iron Man and Captain America were."

PS: If you could have anyone join you on the virtual tour, who would it be?

SG: I'd say The Carters because their production —

EG: It's crazy. You'd get that production value and fun energy.

PS: Kind of like Chloe x Halle's recent live performances, which have been so on point.

EG: They're getting tips from Beyoncé! They're killing it. We actually got the chance to meet Chloe a little while ago — Halle was in London for The Little Mermaid. They're beautiful and so talented. It's crazy to see what they've done these past couple of months.

PS: Which other celebrities have you met?

SG: Dang near all the ones we wanted to meet — Drake, Beyoncé, JAY-Z, Rihanna, Normani.

EG: Yeah, we met Beyoncé when we were at a Roc Nation Christmas party. We were just dancing, getting lit. I was thirsty and [Saiyr] was thirsty, so she wanted to go get water, but on her way back, she'd have to go by Beyoncé and JAY-Z's table. She was like, "Crap, I don't want to walk by there." But she did, and they stopped her, and she was like, "Let me go get my sister." I just went, "Hi!" [Bows]

PS: What other projects do you currently have in the works?

"We want to really establish our name in the music industry. We're here to stay." — Saiyr Gibson

EG: We have our EP that's coming out — EP number two! The title is Get Ready With Me. It's like the "Get Ready With Me" videos on YouTube but with music. Every song has a relatable moment, and you can play it whether you're getting ready for a date, getting ready to go out with your girls — going to your lash appointment, but you're mad because you're stuck in traffic.

SG: And we'll be shooting three music videos from the EP soon.

EG: Yep, those are going to be coming out like boom, bam, pop!

SG: It's definitely more mature. We're diving in deep. There are some cuss words. I know people have been like, "You guys don't ever cuss to express your anger." We do, but we have a demographic, and we're dedicated to our fan base.

EG: We've definitely got more lit R&B stuff, too. And we have DDG from Epic Records. He's been killing the music game, so we're shooting a music video with him. It's gonna be crazy. 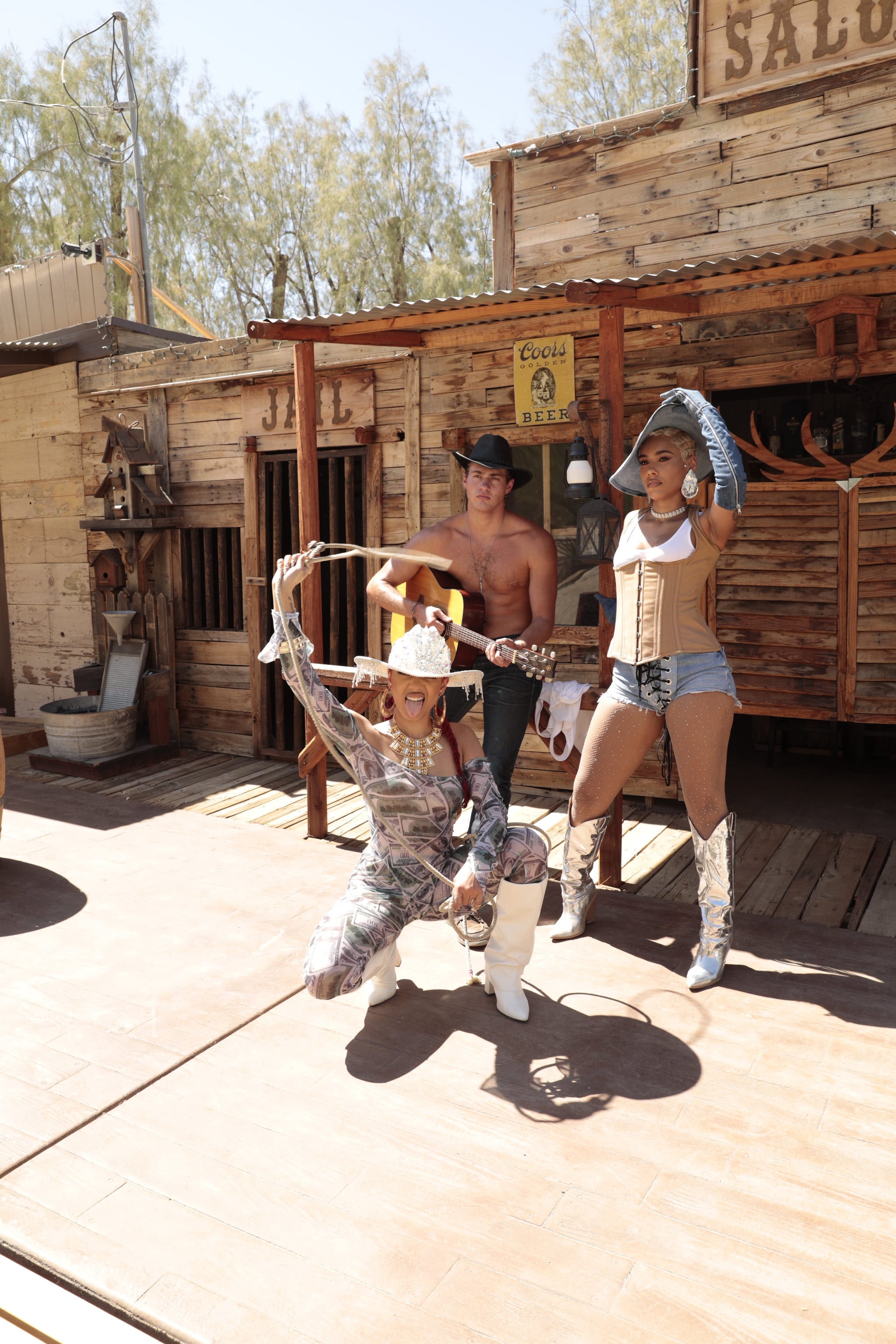 PS: What are some of the biggest lessons you've learned so far in your 20s?

SG: At the end of the day, everything is business. So try to keep your relationships away from your business, and remember not everyone's going to treat you the way they treat others because everyone's trying to get to the top.

EG: I would also say self-care. Really put yourself first and keep good people around you so that you don't go crazy.

SG: And I'd like our EP to top the charts. We want to really establish our name in the music industry. We're here to stay.

EG: Our last project a year ago, it actually went number eight on the R&B charts on iTunes. So we were like, "Oh, we're out here!" But we want to keep growing as people, as artists, and as businesswomen. You can never learn too much. Knowledge is power. People know about Ceraadi because we do so many things, but we really want to make our mark in music because that is our first love, and that's what we were doing at the beginning. A lot of people don't know that. We were touring at LA schools, and people were putting our performances on YouTube. So, this isn't play. This isn't, "Oh, I woke up wanting to do music today because everybody else is." We just want to keep entertaining through different avenues and being —

SG: The jack of all trades. 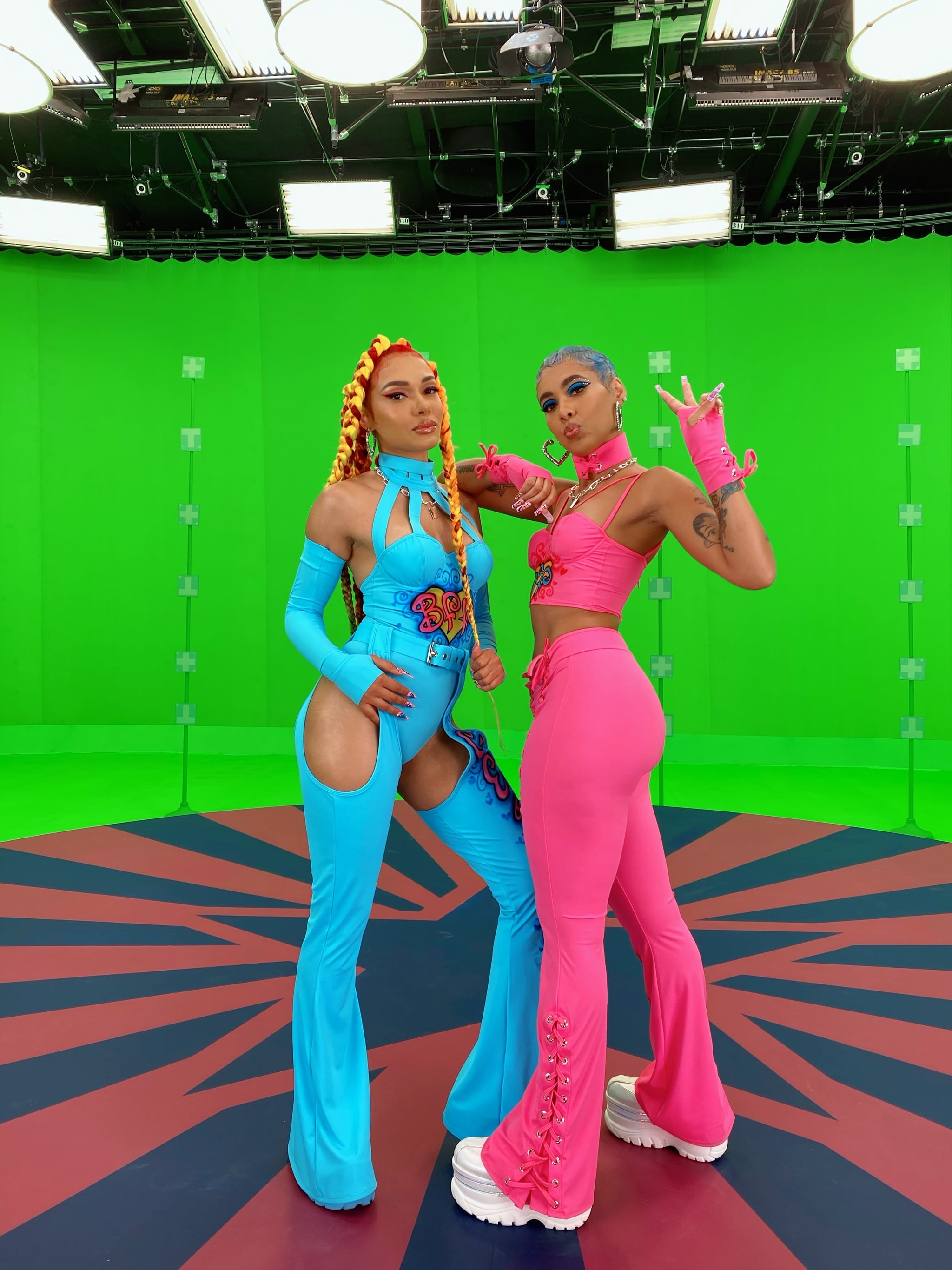 PS: What are some of the biggest blessings 2020 has brought you?

SG: Our family is together and healthy.

EG: And definitely just new opportunities. We've been through so much. We had a third member, our sister [Znuie, who left the group in 2018], so through that situation, we were able to rebrand and grow. We're blessed to not be judged. Everyone has their family issues, but people still respect us for our talent.

PS: What are some things you want to manifest in the near future?

SG: And for the pandemic to be over so that we can actually receive the award. Our dream is to host an award show, perform, and win an award. Triple whammy — go big or go home!

EG: And we want to go platinum on a single or on an album and then venture into beauty, clothing, all that stuff. We have so many ideas.

PS: If you could do a movie, what genre would it be?

SG: Like an Endgame or a Harry Potter type of thing.

PS: Well, we've spoken it and manifested it.

SG: Yep, and I've got all my crystals in my room stacked up.