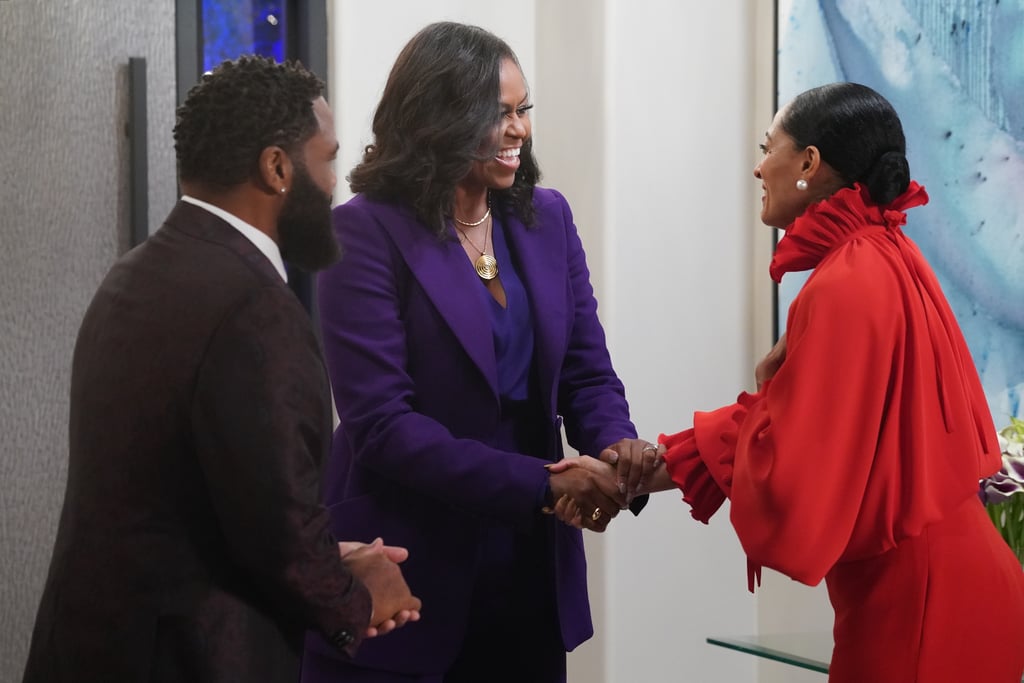 Black-ish is going out with a bang! The beloved ABC series will be ending with its upcoming eighth season this year, but before it comes to a close, Michelle Obama will be making a special appearance as a guest star. According to Deadline, the former first lady is expected to appear as herself in the season premiere. On Dec. 14, we got a first look at her joining the Johnsons for dinner in a series of photos, and on Jan. 3, ABC released a clip of the upcoming episode.

"#blackish is going all out for the final season! We are honored to have trailblazer @michelleobama join us as an upcoming guest star," the show's official Instagram account posted on Oct. 28 alongside a photo of Obama with the cast — including Anthony Anderson, Tracee Ellis Ross, Yara Shahidi, Marcus Scribner, Miles Brown, Marsai Martin, and more. The Becoming author also shared her excitement on Twitter, writing, "I've long been a fan of @BlackishABC's wit and all-around brilliance, and it was such a thrill to join in for an episode. I can't wait for you all to see it! ❤️"

Black-ish debuted on ABC halfway through former president Barack Obama's second term in 2014, so it's only fitting the show reaches a full circle moment with the former first lady for its final season. And for that, we have Ross to thank for Obama's special cameo on the show. In an interview with WSJ magazine, Ross revealed that she's the one who was responsible for reaching out and asking Obama to come on the show.

"She and I are friends. It was a phone call I made," she said. "It felt really fun to show off what a well-oiled machine our show is. It felt really fun to welcome someone so special who's been so important in our world, in our culture, in the kinds of stories we told on Black-ish. We started when they were moving into the White House."

Anderson also dished about how Ross convinced Obama to come on Black-ish during his appearance on The Tonight Show Starring Jimmy Fallon on Jan. 3, raving about how the Obamas have been longtime fans of the show. "Tracee Ellis Ross made the call for the final season to [former] first lady Obama and said, 'We would love to have you on the show,'" he said. "'Do you think you can do this?' And she agreed." See more from Obama's upcoming appearance ahead.