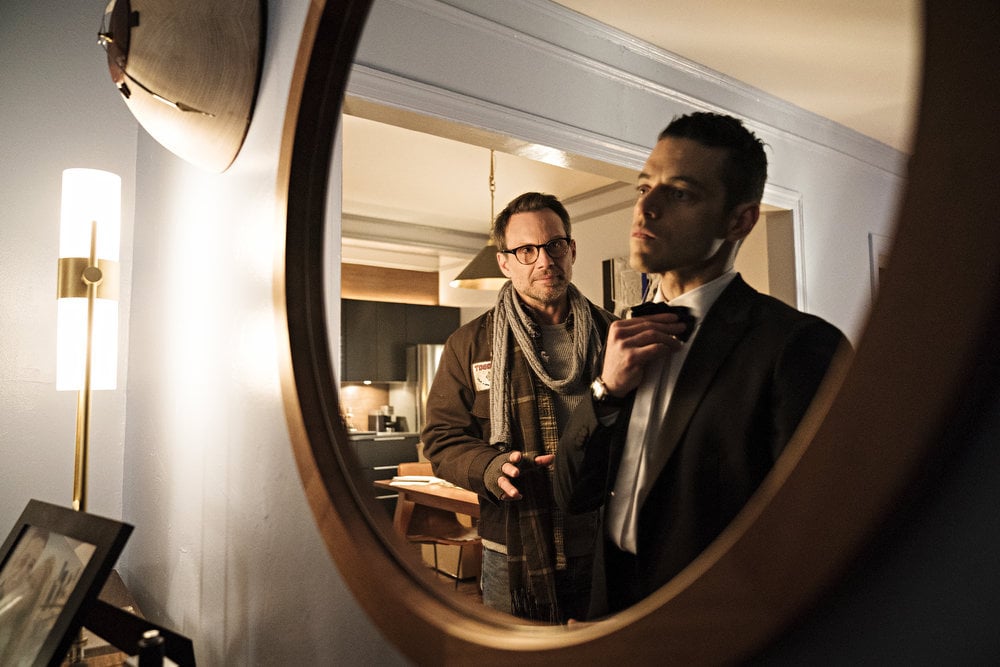 For four seasons,Mr. Robot's Elliot Alderson (Rami Malek) has appeared on screens as the ultimate sci-fi thriller tech superhero. His abilities to maneuver in and out of scenarios and maintain this larger-than-life persona has been what captivates viewers, and also just so happens to be a series-wide nod to one of show's biggest twists. The final season of Mr. Robot may have left some viewers scratching their heads, wondering what is real, what is an alternate world, and really, who is in control of Elliot now. We're here to break down the series finale and what it all means.

No, We Are Not Seeing an Alternate Dimension or Parallel Reality

The Elliot the audience knows as their black hoodie protagonist wanders around what at first appears as a happier, utopian-like alternate reality. Within this space, there exists another Elliot who is living out a fantasy-esque life with a loving and not at all abusive family, a wonderful relationship with his love Angela, and overall better circumstances. The scenes feel just a bit too perfect and unbelievable, and the Elliot the audience knows finds himself extremely conflicted, especially with the inclusion of people who have severely hurt him physically and psychologically in his life — i.e. his parents. The two Elliots also have to confront the reality that whenever they touch, earthquakes rumble, symbolically positioning the men to believe only one can exist. After black-hoodie Elliot kills his doppelgänger, he himself is then shot and buried, which would normally mean the ending of the show. But this is not The Sopranos, and in Mr. Robot, the death of Elliot merely transitions the show into a therapy session happening . . . inside Elliot's subconscious.

While speaking to his therapist, Krista, Elliot learns all of the events he just experienced in the "alternate world" were actually in his head. Whiterose's plan did not make a better world, Elliot did subconsciously. The fake Angela's reveal that this Elliot was in fact just the "Mastermind" starts to make more sense now. Krista unveils the many parts of Elliot's personality and how many personas truly exist within him

The Elliot Narrating the Entire Series Was Another Personality Extension, The Mastermind

The reveal that the vigilante hacker of the series is not the one true Elliot is pretty confusing. So confusing in fact, the showrunners establish three different discussions from characters to explain: First, the personality Mr. Robot fails to relate the truth to a distrustful Elliot, then Angela's unsuccessful approach of taking Elliot to society's headquarters, and finally Krista is manifested to expose the truth in a therapeutic and comforting way. For the most part, the audience is following along with Elliot's "Mastermind" character, even receiving direct address as Rami Malek's character looks into the camera during voiceovers. Krista refers to the audience of the show as voyeurs of sorts. As the story sharply shifts, the viewers may also feel as though the ground they believed they had covered in the show is just as shaky as Elliot's understanding, as Krista explains, we are all just a part of his psyche.

There are no fewer than five personalities existing within Elliot: The Protector (Mr. Robot), the Persecutor (his mother), Young Elliot, the Voyeurs (us), and The Mastermind (the man the show has followed). Each was created during a time of need when the real Elliot couldn't process trauma. Mr. Robot's intention was to serve as a father figure when Elliot's real father died after an extremely abusive upbringing. The Persecutor voiced Elliot's concerns that he was to blame for all of his abuse. Elliot's younger self took the role of processing the abuse when his adult self could not. Then the voyeurs, the show's audience, were "created" to watch him evolve and cope with his traumas. Finally, The Mastermind was created by Elliot right before the events of the show took place, so for all intents and purposes, he has been around just as long as the audience.

The Mastermind's "birth" gave Elliot a place to channel all of his rage and anger out of. The Mastermind performs as a hacker, which in many respects is like a superhero to Elliot as he attempts to go against an unfair and exploitative world. In order to accomplish this, The Mastermind needed full control over Elliot's being. The alternate reality shown at the beginning of the episode is a world created by The Mastermind to shove the real Elliot into to keep him safe, happy, and appeased while he worked to make his real world better. The person us, the voyeurs know, is just as made up as we are meant to believe we are.

Who Gets Full Control of Elliot and What Happens to the Others?

The one person missing from the fantasy world The Mastermind made up for Elliot is his sister Darlene. Krista and The Mastermind grapple with if he chose not to include her because he knew if even an imaginary version of her were present she would try to get Elliot to wake up and take control. So the show ends with The Mastermind awakening in the hospital after Whiterose's explosion. He sees Darlene who spends some time listing off which experiences were real and not fictitious. They really did wipe out the world's debt and take down E Cop and the Dark Army. When The Mastermind tells her he knows he is not real, despite spending so much time with her, she accepts his reveal, acknowledging she knew he was not the person she grew up with. She knew this whole time he was another personality.

Finally, The Mastermind, Mr. Robot, young Elliot, his mother, and us in the audience take our "seats" in a theatre. The screen and projector begin to fade and the screen materializes into an iris as all the personalities now watch on as Elliot regains control The show closes with Elliot awakening, with only his eye visible, and Darlene's voice welcoming her real brother back with a, "Hello, Elliot."