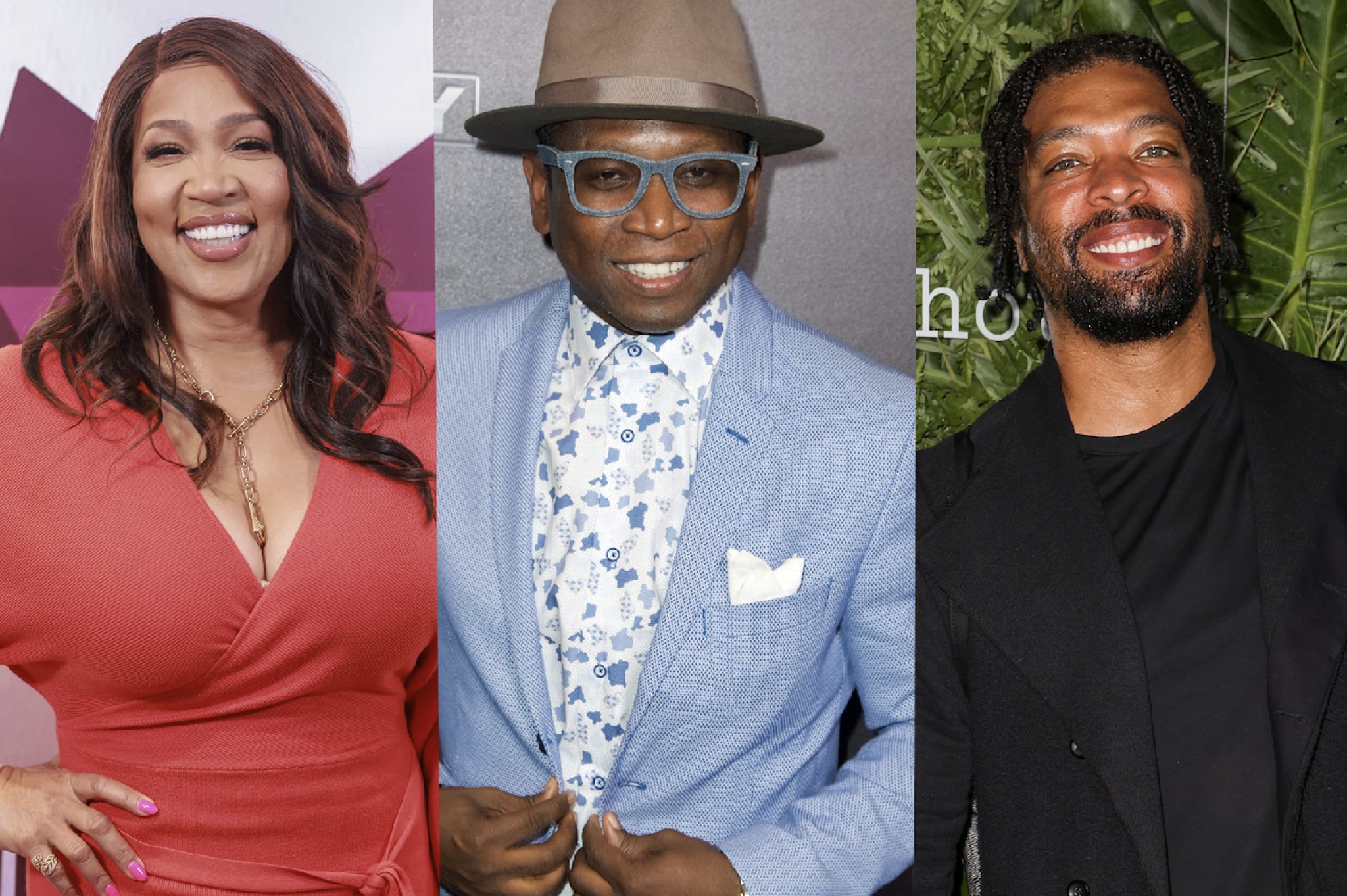 If there's one thing Guy Torry, DeRay Davis, and Kym Whitley have in common, it's their passion for comedy. Phat Tuesdays founder Torry brought together the greatest in their craft at The Comedy Store on Sunset Boulevard as a chain reaction to the 1992 LA riots. The legacy continues in the new Amazon Prime Video series "Phat Tuesdays." Torry, Davis, and Whitley tell POPSUGAR about everything from the magic of Black audiences to their memories of the late comedian Bob Saget. We also asked them their least-favorite question: who are your favorite comics, from the giants of the '90s to up-and-comers?

"This is the question I hate the most because it's too many," Torry explains. DeRay and Whitley explain that many Black comics don't get the exposure they deserve. "It's so frustrating," Whitley says, specifically referencing Black women not given opportunities.

DeRay adds: "I'm not going into the Black and white thing, but if you watch other films, they'll cast their friend to be a funny cameo . . . That's why I love Sam Jackson's career, because from the small roles to the big roles, he stepped in there and really knocked it out of the park. You remembered those roles, and I think we can do that for our friends." He notes that it's rare Black comedians, in comparison to their non-Black peers, are given mundane cameo roles like being a hot-dog stand worker or a security guard. The roles aren't central to the storyline, but they allow for exposure instead of hiring an extra. Davis cites actors like Adam Sandler and Will Ferrell, who have notoriety in cameos and as main characters.

"We don't have as much opportunity, so when we get them, we really grab on to them. We think, 'Oh, this is — I better hold on to this as long as I can. I can't really share this,' instead of really treating the comedy like a baton and passing it back in a relay race of us and enabling each other in good ways," the "Improv Presents: MONDERAYS" founder says. "If we had more opportunities to do these films where everyone's really shining, then you'll be able to see the people that [Whitley]'s saying are hidden." Keep reading for comedians Torry, Whitley, and Davis want to uplift and put on your radar.

Guy Torry on His Comedian Recommendations

It was "Def Comedy Jam" that really started the key to the engine for me. It was Def Comedy and watching my brother [Joe] and Martin Lawrence and Eddie Griffin and Bernie Mac and Steve Harvey and Cedric [the Entertainer] on those first seasons [and] Adele Givens and Yvette Wilson. Watching those comedians on "Def Comedy Jam" is the thing that got me.

And then once I got into stand-up and started studying the game, then I started appreciating the greats like Eddie Murphy, Richard Pryor, even pre-pill Bill Cosby, Moms Mabley, and Whoopi Goldberg. So those are on my comedy Mount Rushmore, along with George Carlin, Lenny Bruce, and the Wayans, Keenan and Damon.

I'm a fan of comedy so I love the new "social medians," as ["Def Comedy Jam" creator] Bob Sumner calls them. D.C. Young Fly and Chico [Bean] and Karlous Miller and those young guys that are coming up that are really, really comedians and doing their thing . . . Ms. Pretty Ricki . . . Ty Davis.

DeRay Davis on His Comedian Recommendations

I never watched comedy [on TV] until after I started. When I first went up, I probably did some of everybody's style. . . . After sitting and watching and being part of the circuit, some of my comedian friends like Corey Holcomb [and] Deon Cole were [my] locally based idols . . . I saw so many comics that I couldn't — I would have to sit and write a list.

David Arnold, Tony Roberts . . . Me and David used to get into it for no reason, just comedically. Just two light-skinned dudes going back and forth, light-on-light crime. It's like we continue going to school and now everybody's searching for their doctorate.

There're some beasts out here, man. And some of my friends are getting second chances, so I don't want to say they're the up-and-comings. Lavell Crawford's back out here. But as far as youthful [comedians, I enjoy], D.C. Young Fly, Chico [Bean], and that whole "85 South Show," and Lewis Belt. There's a lot of comics I see that if I was an agent, I would keep my eye on them.

Preparation is everything. I always tell people for my audiences [at MONDERAYS], "I'm never ready, but I'm always prepared." I'm never ready for their audience. I don't know what I'm going to get. But I'm always prepared, always have something that I'm going to deliver to these people . . . What I've done is instead of it being like, "This next guy better be funny," it's more like, "Alright y'all, everybody starts with an A, and you can get an F."

Kym Whitley on Her Comedian Recommendations

You know who used to kill me? Is that doggone Robin Harris. A beast back in the day. Before I was doing comedy I used to watch him. Marsha Warfield is always doing deadpan. If you look at comedians from back then, you're like, "Oh my, how do they come up with that? How do they do that?"

But I definitely echo DeRay, David Arnold. We look at our peers too. If you're on stage and we're coming up next or whatever and you are actually laughing, oh my gosh. You want them to be seen. Melanie Comarcho or Hope Flood, women who been out here doing it many years — they're funny and they're not seen.

For more Black comedians, be sure to catch "Phat Tuesdays," available to stream on Prime Video.