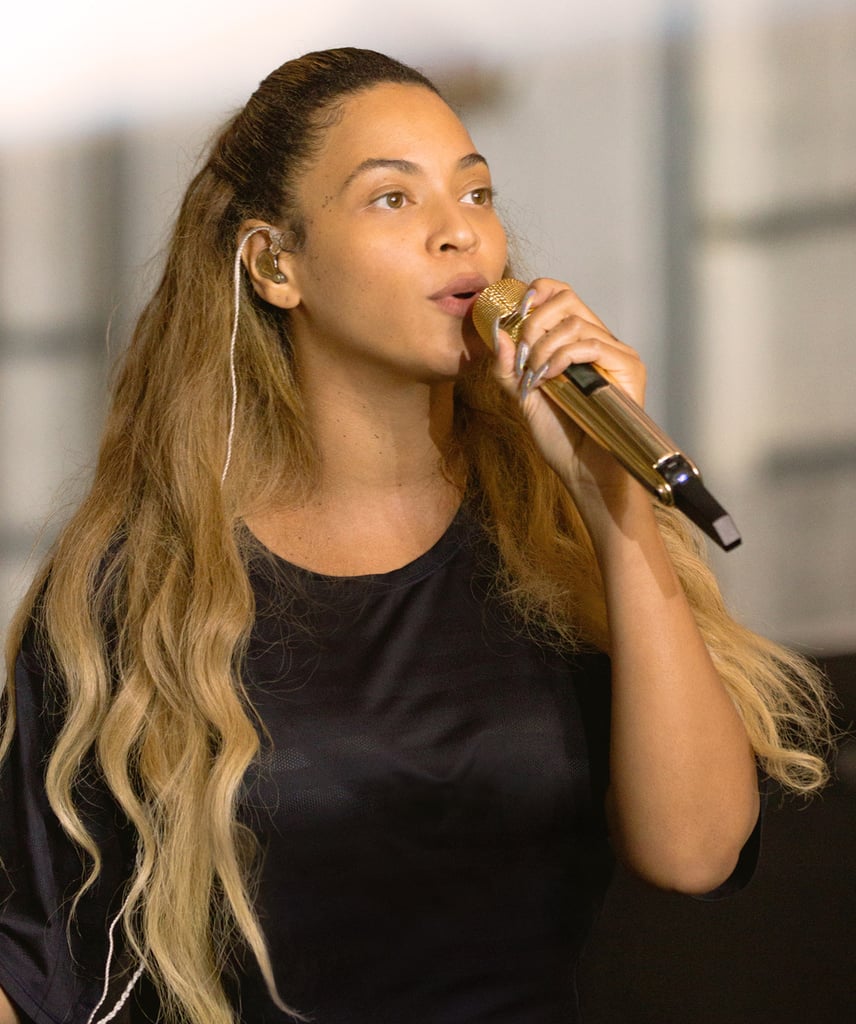 Getting Into Rehearsals Soon After Giving Birth Was Difficult

Keeping it real about her struggle, Beyoncé shares footage from her first-ever rehearsal postbirth. "I was 218 pounds the day I gave birth," she says. Mere months later, she was rehearsing for her two-hour performance. The artist admits it was hard and that there were days where she thought her strength and endurance would never be the same. "I had to rebuild my body from cut muscles" after her emergency C-section, she explains. And it wasn't easy getting to the amazing form she showed off at Coachella.

"In order for me to meet my goals, I'm limiting myself to no bread, no carbs, no sugar, no dairy, no meat, no fish, no alcohol . . . And I'm hungry," she admits, snacking on an apple. The superstrict diet came along with the hours-long rehearsals, meetings to ensure every detail was right, working out, and still being a present mother to her 7-year-old and twins.

"It's not like before when I could rehearse 15 hours straight. I have children. I have a husband. I have to take care of my body," she says.

"I definitely pushed myself further than I knew I could and I've learned a very valuable lesson. I will never, never push myself that far again. I feel like I'm just a new woman in a new chapter of my life and I'm not even trying to be who I was. It's just so beautiful that children do that to you," Beyoncé adds.

At one point, the singer admits that rehearsals were hard because a lot of choreography is about injecting your own personality to bring it to life, and she didn't feel like herself. "It took me a while to feel confident enough to freak it and give it my own personality."

But the payoff leaves the artist obviously elated in footage where she tries on an old costume that she's able to fit into 33 days before the show. "Big deal! It's zipped!" she exclaims, FaceTiming her husband to show him.

Holiday Fashion
Yep, Ariana Grande Sure Wore Heels With Her Snowsuit For Her New Christmas Collab
by Yerin Kim 19 hours ago

Jonah Hill
Netflix Has Had It With Jonah Hill Using a Fart Machine at Press Events, but He Won’t Be Silenced!
by Naledi Ushe 20 hours ago