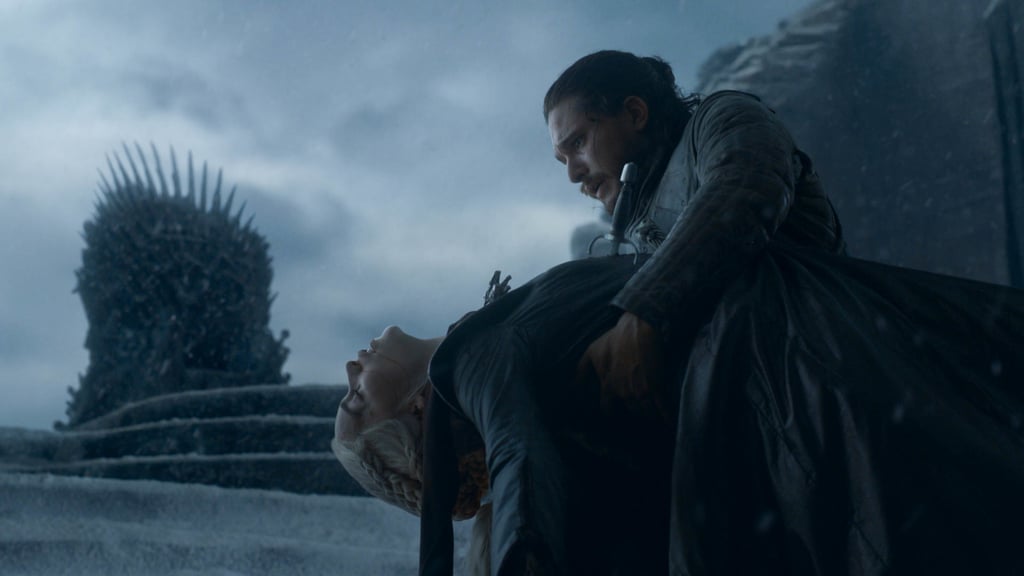 Why Is Daenerys Targaryen's Death So Damn LAME?

Let's start with the most frustrating death that's aired on this show in a long time, shall we? Because no, Dany is not one of the people who make it out of Game of Thrones alive. In the aftermath of her fiery reign of terror in King's Landing, Daenerys orders her men to kill all the remaining Lannister soldiers in the city, regardless of if they've surrendered or not. While Jon and Tyrion oppose this tyrannical course of action, Grey Worm eagerly carries out her orders. Dany later makes a speech boasting about how she's freed the people of King's Landing and now intends to free those imprisoned throughout the rest of the world. And then, because all bets are off, she tosses Tyrion in prison for treason (for trying to help Jaime and Cersei escape).

Alone and free to enjoy the spoils of war, she retreats to her throne room to privately bask in her power. When Jon arrives not long after, she marvels out loud to him about the Iron Throne's size and history. He cuts straight to the point, however, shouting, "Have you been down there? Have you seen? Little children, burned!" Daenerys is unmoved. "I tried to make peace with Cersei. She tried to use their innocence against me. She thought it would cripple me," she coldly explains. "We can't hide behind small mercies. The world we need won't be built by men loyal to the world we have . . . It's not easy to see something that's never been before. A good world."

Jon asks her how she knows the world she's creating will be a good one, and she replies that it's because she knows "what is good," and so does he: "We break the wheel together." Jon, near tears at this point, pulls Daenerys in for a passionate kiss after declaring, "You are my queen, now and always." And then, like any good boyfriend, he stabs her in the gut and weeps over her body.

Needless to say, it's an extremely disappointing end to Daenerys Targaryen. The fact that Dany, one of the show's few female characters (and also one of its most badass characters in general), goes out in such a lame, anticlimactic fashion at the hands of a man (who claimed to love her, on top of it) is such a dumbfounding waste of an arc. We were deprived of a tense, ice-cold exchange between Daenerys and Cersei in the midst of battle in the penultimate episode (something the show has been building toward). And now we've been denied seeing Daenerys get the kind of death a character of her magnitude deserves — something intense, meaningful, and worthy of the power she's commanded for eight seasons. Instead, she literally goes out with a whimper.

by Izzie Deibe 43 minutes ago