#4 - shakira, even though everyone and their mother has done this impression pic.twitter.com/p7MDNZI5EC

Some celebrity impressions are just too good to be true, and Rachel Zegler's imitations of Britney Spears, Idina Menzel, and Shakira are definitely up there. In a Twitter thread on Tuesday, the 18-year-old West Side Story star decided to break them out for her fans, and I was not prepared for how amazing she is! "[Here's] a thread of impressions that I can do because they're too obscure for my resume even though no one cares," Zegler captioned the first video in the series. Cat Valentine from Victorious, Star Wars's R2-D2, and Yzma from The Emperor's New Groove are just a few other impressions that she absolutely nails. I can't stop cracking up at that Cat laugh. See all of Zegler's hilarious impressions ahead. 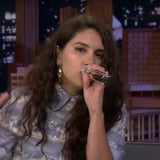