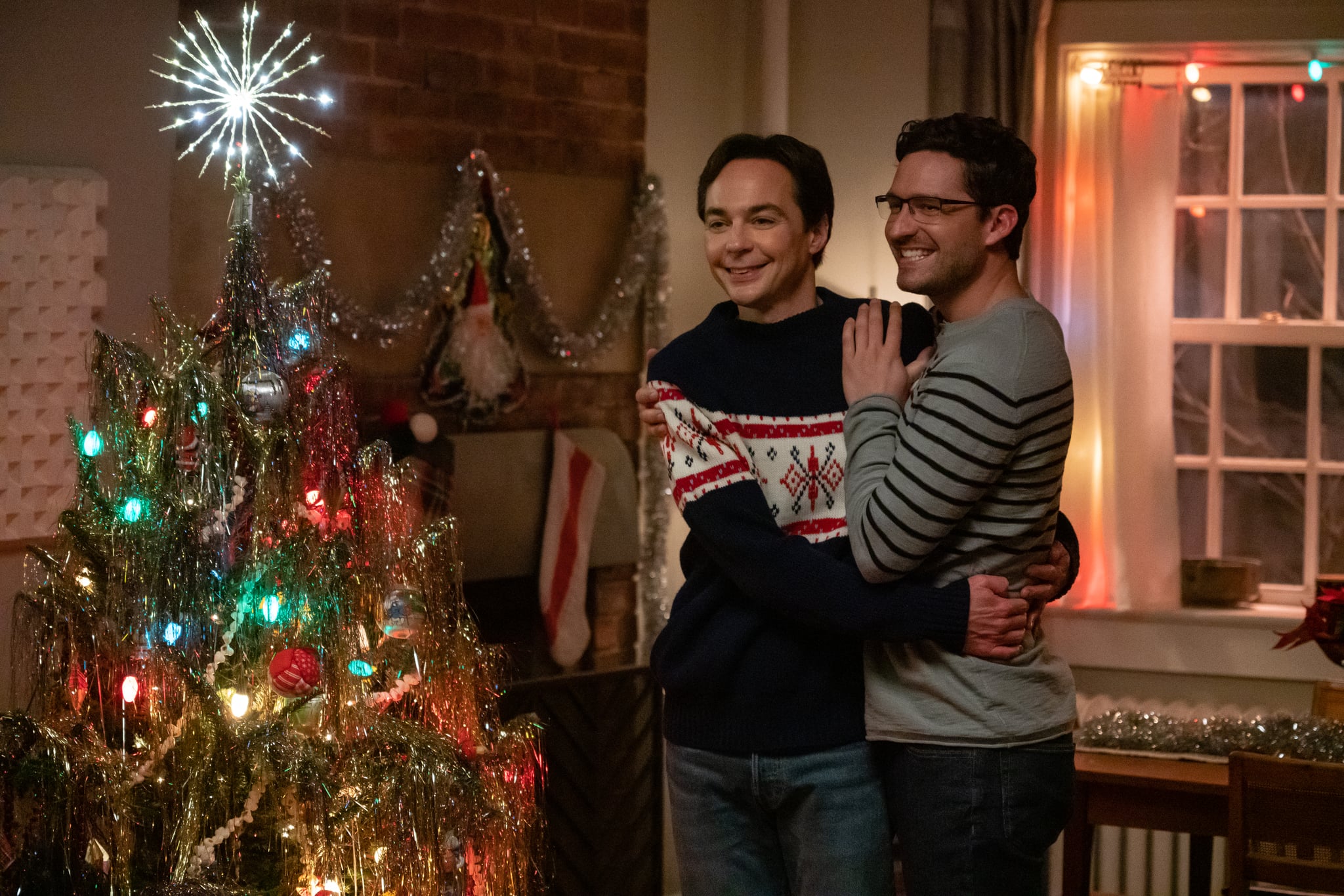 Michael Ausiello (Jim Parsons) was an entertainment journalist at TV Guide when he first locked eyes with photographer Kit Cowan (Ben Aldridge) across a heatwave of neon-clad partygoers in a New York City bar in 2001. In "Spoiler Alert," an intimate — and, at times, whimsical — retelling of their real-life love story, Michael and Kit spend 14 years living out their rom-com romance. As viewers, we witness everything from their first kiss (over cocktails on a kaleidoscopic dance floor) to the first time Michael meets Kit's parents, Marilyn Cowan (Sally Field) and Bob Cowan (Bill Irwin).

The film is based on Ausiello's own 2017 memoir, "Spoiler Alert: The Hero Dies," which, spoiler alert, details the 11-month stretch from Kit's terminal-cancer diagnosis to when he dies. "[This role] allowed me to work in a way that I never had before. And I think that's to do with tapping into something authentic and emotional," Aldridge tells POPSUGAR.

The film pays homage to the entirety of the couple's relationship. The moment Michael reveals his near-relationship-ending obsession with The Smurfs, we're given a comprehensive snapshot of the duo's dynamic, from their flirtatious banter to painful silences. And this insight makes it all the more difficult to digest when their relationship dissolves.

Slowly, nights spent lying together under the Christmas tree, admiring the lights, transform into passive-aggressive arguments about infidelity and loyalty. While Michael is initially fearful that "Smurfgate" will end them, their undefined "break" only becomes clear when the couple announce — over cocktails at a holiday dinner party — that their "picture-perfect" relationship has gone cold.

From heartfelt conversations about Michael's struggles with body image to Kit's initial hesitance to come out to his parents, the movie is a profound exploration of intimacy. "This . . . you . . . it scares me," Kit tells Michael when their relationship begins to slip into more serious territory. Michael adds, "It scares me, too . . . I'm worried I'm going to fall in love with you and you're going to break my heart."

The next time the couple tell each other they're scared is when Kit is diagnosed with terminal cancer, putting their relationship struggles on pause — and ultimately bringing them closer together. "It was just really tough territory," Parsons says about portraying that on screen. "It was a little bit painful, but it was also a fascinating and joyful, incredible place to be . . . Everyone was doing the best they could to tap into some of the most difficult parts of being human that are also the most magical parts of being human, and so that was powerful."

At the end of the film, when Kit passes away, their love story comes full circle: Michael says, "I was always afraid Kit would break my heart, and he did, but not like I thought he would."

When it came to casting Kit, Parsons, who was also a producer on the film, and director Michael Showalter led the charge, immediately setting their sights on Aldridge. "I just felt a huge responsibility in playing him and honoring his story and knowing that he was the half of this couple that was no longer with us," Aldridge says. Ausiello, who was on set every day of filming, adds that the actor considered every detail — including the way Cowan used to hold his camera — in portraying his late husband.

"When I started acting professionally, I was 21 and I really didn't in my wildest dreams imagine that these stories would exist in a way that could be watched by people and let alone me be in them," Aldridge says, adding that the film breaks the formulaic media representation of LGBTQ+ couples as victims of discrimination. Instead, it focuses on everyday love. "They are very important stories," he says.

"It's weird, but it's like, in some of the darkest moments, we found the humor in it, and it helped me, certainly, get through that year."

Long before their love became a memoir turned movie, Ausiello and Cowan owned a cat named Mister Scooch. While the beloved pet didn't make it into the film, he is an integral part of Ausiello's memories with Cowan — like the scene where Kit is blowing bubbles on the beach, which captured the real-life moment frame for frame. In addition to Mister Scooch, the couple also shared a dark sense of humor, something Ausiello says helped carry them through the darkest times in their relationship. "We gallows humored our way through that whole [cancer] experience," he says. "And god, I think I was so grateful for it. It's weird, but it's like, in some of the darkest moments, we found the humor in it, and it helped me, certainly, get through that year."

Today, Ausiello remains close with his late husband's parents, making the trip up to Millersburg, OH, to visit Cowan's ashes once a year. He also hopes he finds love again, he says. "I hope I find someone else that I can connect with," he explains. "Probably not on the same level as a Kit, but close would be amazing. I think we all want that. We're all searching for love. I'm doing that, too. And beyond that, I hope to tell more stories."

Sharing their story wasn't easy, but Ausiello hopes the film will help couples in similar situations. "I felt like we had been through something special, and I think I felt like maybe our story could help other people," he says. "People who are going through tough times in a relationship, people who are struggling with illness, people who are struggling with grief. If this story can help someone, then that's a nice legacy to leave behind for Kit." Ausiello adds, "Ultimately, I hope [Kit] would see it as what it was intended as, and that's a beautiful tribute."

On screen, Kit and Michael's journey is "not clean, not simple," Ausiello says. But the sincerity of their "intense, deep, complicated love" shines through in moments of spontaneous joy and moments of debilitating pain, and never once does it feel like anyone is acting.

"Spoiler Alert" premieres in theaters nationwide on Dec. 9. Watch the trailer ahead.

Jane Fonda
Jane Fonda Reflects on Her Past Eating Disorder: "It's a Very Lonely Thing"
by Chandler Plante 13 hours ago