Alexander Skarsgård is taking on the most chilling role in CBS All Access's adaptation of Stephen King's horror novel The Stand, and it looks like Bill Skarsgård's love of horror runs in the family.

The miniseries, which was first teased in June, is set in an apocalyptic world decimated by the Captain Trips plague. The fate of the world — which is now caught in a struggle between good and evil — now rests on the shoulders of Mother Abagail (Whoopi Goldberg), a 108-year-old woman who claims to be a prophet of God. Along with a handful of remaining survivors, Mother Abagail must confront the unspeakable evil powers of Randall Flagg (Alexander Skarsgård), the Dark Man. Other cast members include James Marsden, Amber Heard, Black Mirror's Owen Teague, and Orange Is the New Black's Brad William Henke.

The Stand will be directed by Josh Boone from The Fault in Our Stars and cowritten with Ben Cavell, though a release date has not been announced yet. Still, if Skarsgård's skills in horror acting are anything like his brother's, we're in for a terrifying surprise. Keep reading to see the official cast ahead. 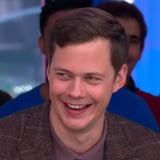