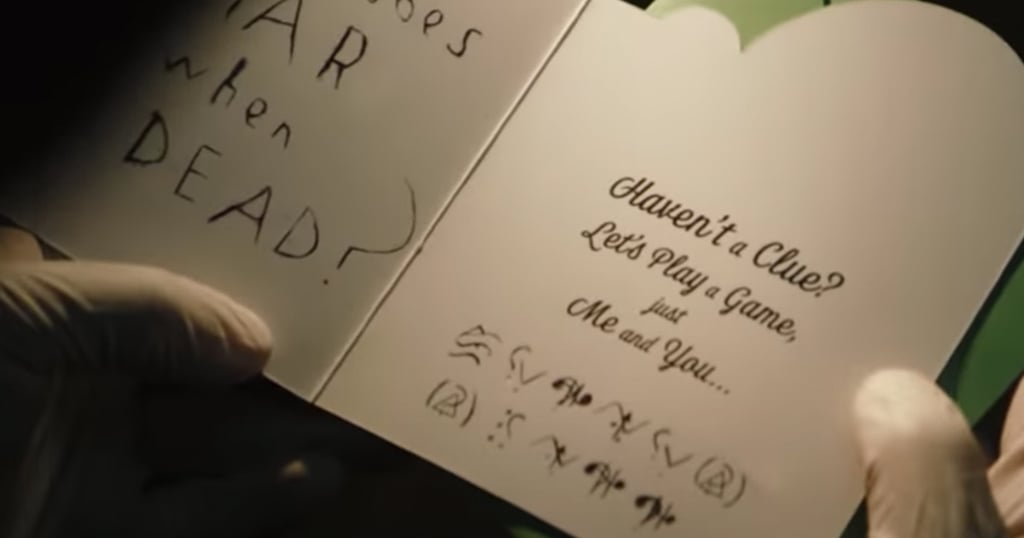 Fans of a good brain teaser will know that The Riddler is basically a walking puzzle factory, and his latest riddle in the trailer for The Batman already has fans in full-on detective mode. In the trailer, a card packaged in a green envelope arrives addressed to "The Batman." Inside, the card poses a handwritten question: "What does a liar do when he's dead?" Followed by a set of unfamiliar symbols that seem to be hiding some kind of message, the card continues, "Haven't a clue? Let's play a game, just me and you . . ."

In a feat that would make both Commissioner Gordon and Alfred proud, DC fans have already solved the puzzling riddle using some impressive word-to-letter correlations, and the breakdown is just as mind-boggling as the original clue. In a Twitter thread, game designer Mike Selinker explained exactly how he solved the puzzle. Keep reading for the final solution and to see exactly how the cryptic symbols translate to an ominous message that has us hoping emo Robert Pattinson Batman can solve this riddle for himself in record time.

Related:
So, Exactly Which Villains Is Bruce Wayne Dealing With in The Batman?
Previous Next Start Slideshow
BatmanMoviesThe BatmanEntertainment NewsBrain Teasers