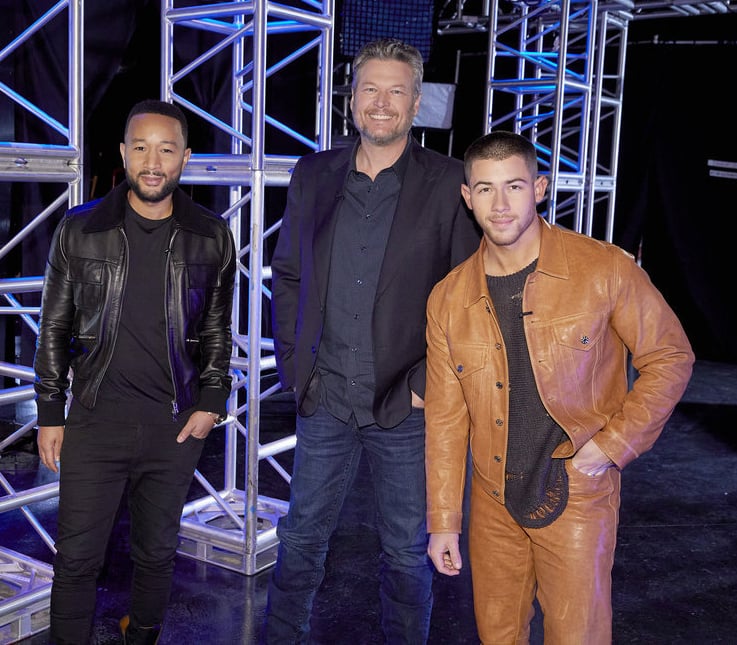 Ariana Grande is joining The Voice next season, and no one is more excited than the show's current coaches. During a Q&A panel with a group of journalists for season 20 on Tuesday, POPSUGAR asked Blake Shelton and John Legend what they're most looking forward to about having the Grammy-winning singer on the show. Though the show has been playing musical chairs with the fourth coach chair these past few seasons — first with Nick Jonas, then with Gwen Stefani, and now with Jonas again this season — Legend noted that's part of what keeps things so entertaining.

"Part of the charm of the show is that we keep things exciting and we bring different coaches along that will add a new flavor to the mix," he explained. "Ariana is one of the most gifted artists in our business today. She is a huge chart-topping artist with amazing vocal skills. I think so many of our fans out there truly love her and I think she's gonna bring additional fans to the show, a different audience to the show, and I think it's gonna be great for all of us. What we've learned is that our audience likes some stability with coaches, but it also likes for us to introduce some new flavors to the mix every once in a while, and I think Ariana is going to be a great addition to the show."

Of course, Shelton had a slightly different reaction to Grande joining the show. "I'm excited about Ariana joining the show because it's somebody new for me to beat. I'm tired of beating John every season," he teased, to which Legend quipped, "You beat me once!" Shelton continued with the jokes, adding, "Nick is the easiest coach I've ever beat in 20 seasons of doing this show. The easiest defeat of my career was Nick Jonas. So I'm looking for a challenge. I think Ariana could be a challenge. I'm looking forward to beating her though."

"She's an incredible artist and one of our generation's best vocalists."

Since Grande is taking over Jonas's seat for season 21, POPSUGAR asked the Jonas Brothers singer if he had any advice for her, but as he perfectly stated, "Ariana clearly doesn't need my advice." "She's an incredible artist and one of our generation's best vocalists," he said. "She's got such an incredible career to pull from to help inspire these artists she's going to work with." Of course, he joked that it wouldn't hurt if she ended up beating Shelton in the end. "I'm so excited to see her beat Blake," he laughed. "It's going to be great for me."