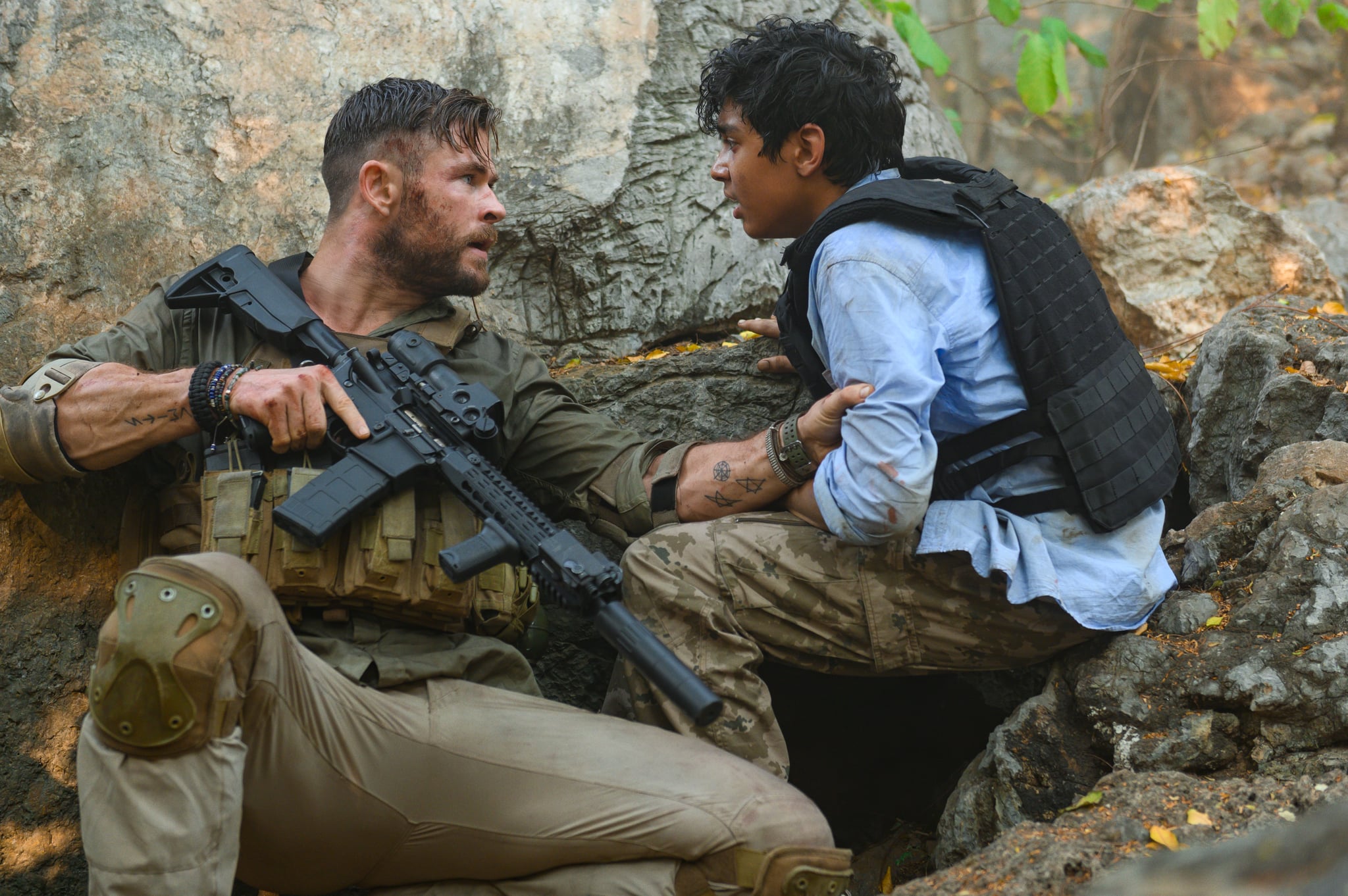 Netflix's newest action-thriller Extraction is essentially American Sniper meets Marvel Comics with a Bangladesh twist. The flick stars Chris Hemsworth as mercenary Tyler Rake, who takes on the assignment of saving the kidnapped kin of an Indian drug lord from the hands of another in Bangladesh. Plans quickly go awry when the city goes on lockdown and Tyler realizes finding the kid is turning out to be easier than the actual journey home. Packed with gunfights, explosions, and car chases, Extraction is a fast-paced movie for sure, and if you don't pay attention to the small details, you might miss something, especially in its very ambiguous ending. Here's a breakdown of Extraction's shocking curveball ending.

Tyler is first introduced to us as a mindless drunk who thinks cliff-diving off the coasts of Australia isn't so bad of an idea. It's obvious danger doesn't scare him. Upon receiving the mission to rescue Ovi (Rudhraksh Jaiswal), the son of a wealthy crime lord, Tyler quickly learns the hardest part of the mission will be transporting Ovi to safety amid a citywide lockdown. After successfully freeing Ovi, the duo snake through the city of Dhaka fighting off an army of bad guys out for Tyler's blood and Ovi's body — dead or alive.

Netflix doesn't waste any time getting to the thick of it. Early into the quest, Tyler's comrades are quickly killed, leaving him to fend for himself as a one-man army. Come to find out, his team, who is remotely moderating the situation, was played and it was all a setup.

In a last attempt to save Ovi's life, Tyler strategies an escape route, which will include one more high-intensity car chase through the city, ending with a journey on foot to a nearby chopper. Everything seems to be going according to plan until it comes time to cross the overpass, which is invaded with armed soldiers, purposely on the hunt for Ovi.

An insanely long shoot-out finally comes to its apex as we watch Tyler emerge from the smoke in slow motion, surrounded by burning cars. (Hemsworth was totally channeling his inner Thor during this scene.) Meanwhile, Ovi has somehow managed to stay alive and hidden while everyone around him has either been blown up or shot dozens of times. Ovi makes it to the opposite end of the bridge, and it looks like we're about to get our happy ending, when BOOM! Tyler is shot from behind. He stumbles behind a van to protect himself from a second bullet, but there's too much blood. Making eye contact with his partner a few yards away who has safely secured Ovi, Tyler gives a small nod. And by what happens next, it's easy to infer the signal he was trying to convey.

Presumably, Tyler is dead. I mean, we all saw him lean back against the guardrail, letting himself fall into a dark abyss. The movie ends full circle, where we witness Ovi reciprocate Tyler's opening daredevil stunt by plunging off the school diving board. As he swims to the surface, there's a blurred figure eyeing him from the distance, who happens to have the same outline and features of Tyler.

Did Tyler somehow survive? Is he there to now train Ovi as his apprentice? Even better, is he there to adopt Ovi as his son? While these could all lead to great plots for a sequel, it's safe to say Ovi is probably envisioning Tyler in the distance. We know from their intimate conversations that the pair have a father-son relationship, specifically after Tyler confides in Ovi about his son's battle with leukemia. From Ovi's backstory, we know he's never had a real father figure in his life, and Tyler protecting him is a kind of love he had never felt before.

In an interview, director Sam Hargrave debunked all our possible theories on what really happened to Tyler, explaining the best way to end Extraction was with an ambiguous conclusion.

"If people on one hand feel like the story is complete and is a story of redemption through sacrifice, then for them, it'll be where the kid is imagining [Rake standing there], and then now you go, 'Yes, I'm satisfied.' If you feel like you love Tyler Rake, and you love Chris Hemsworth, and you want a sequel, and you're like 'There's no way, you can't kill him!' then that's Tyler Rake standing there looking at you," he said.

Looks like we'll have to wait for a sequel to get our answers! Until then, it's fair to assume Ovi now has a guardian angel watching over him.

Johnny Depp
Johnny Depp to Direct "Modigliani" Biopic, His First Return Behind the Camera in 25 Years
by Njera Perkins 19 hours ago