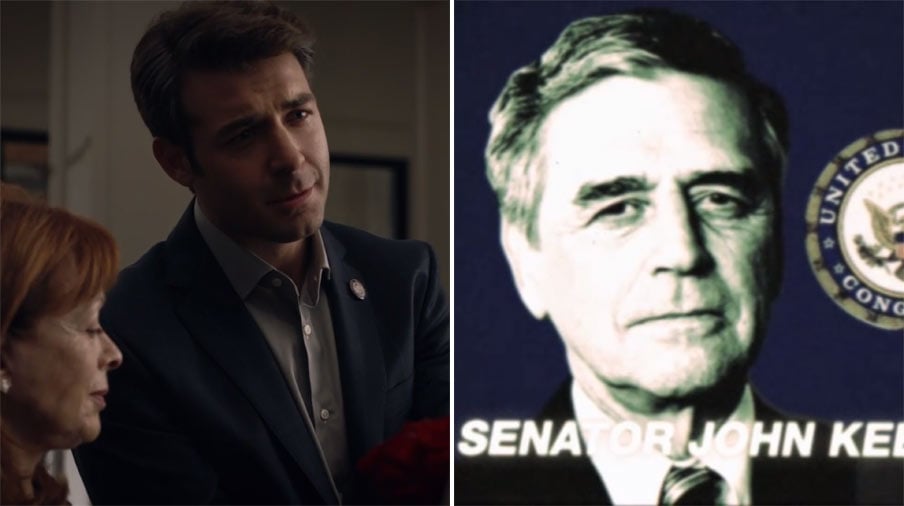 A new character by the name of Senator Keene (played by James Wolk) is introduced in this week's episode of Watchmen. Fans of the graphic novel are certainly familiar with that name, though this Senator Keene seems to be the son of the one from the book. The question is: does the apple fall far from the tree when it comes to the older Keene's fight against the Watchmen?

In Alan Moore's Watchmen graphic novel, Senator John David Keene is a Republican senator who aligns himself with the New York Police Officer's Union when they start protesting the work of masked vigilantes in the mid-1970s. At the time, public opinion of vigilantes has already started to sour, especially against Rorschach due to his particularly brutal approach to taking down criminals.

Related:
Watchmen: Everything You Need to Know About the Mysterious Adrian Veidt

Then in 1977, police from major East Coast cities go on strike to protest masked vigilantes. The strike leads to deadly riots, which the Watchmen try to contain. But the masked adventurers are still blamed for the looting and the deaths that result from the riots. So Senator Keene passes a law known as the Keene Act, which makes vigilantism illegal, except for those who fight crime for the United States government.

The act bans masks, capes, experimental gadgets and weapons, and unlicensed vehicles, and it encourages citizens to notify the police if they encounter any vigilantes. A propaganda video supporting the act — also part of the marketing scheme for the 2009 Watchmen film — ends with the line: "Being vigilant is not a crime. Being a vigilante is. Together we can forge a better America."

After the act passes, Doctor Manhattan and the Comedian choose to go into the service of the government as their personas, while Laurie Juspeczyk chooses to work for the government as herself and retires her masked persona. Nite Owl retires his persona, while Ozymandias retired two years before the act's passing.

Only Rorschach refuses to comply with the act, continuing to brutally dispatch criminals in New York City and leaving them for the police to find.

In the Watchmen TV series, Senator Keene is Joe instead of John, and Chief Crawford's wife, Jane, worked on his campaign. It hasn't been confirmed that he's John's son, but that would make sense. The younger Keene shows up at the chief's wake and promises Angela that all of his resources are at her disposal to find the "animals" who killed the chief. But is Keene to be trusted? Does he feel the same way about masked crime-fighters as his (likely) father did? Does he know Angela is also Sister Night?

It'll be interesting to see if he is working for or against Angela and her cohorts, especially after the discovery Angela made in Chief Crawford's secret closet compartment. It certainly looks like Crawford was hiding a KKK robe and hood, but don't be too quick to assume that's the whole story with this show.