In early 2018, television mogul Ryan Murphy inked a massive deal with Netflix; now, a year and a half later, his first Netflix show has dropped. The Politician tells the story of Payton Hobart (Ben Platt), a highly ambitious young man who will be running for a different political office in each season.

The first season features Payton as a high-school senior running for class president. He taps Infinity Jackson (Zoey Deutch), a sickly, cancer-stricken student, to be his running mate . . . then he quickly realizes her family is almost too crazy to be believed. Infinity's nana, Dusty (Jessica Lange), is running Infinity's life, but her parents are conspicuously absent. So just what happened to them, specifically her mother, Dina (Taylan Tural)? Read on to find out, but be warned of spoilers for the whole first season of The Politician.

It takes until episode six of the eight-episode season before Dusty finally reveals what's really going on with Infinity when she is confronted by Infinity's boyfriend Ricardo (Benjamin Barrett) about her possibly being the cause of Infinity's illness.

Dusty spins a tale of how enraptured she initially was with her beautiful baby daughter. She was like "a little doll baby," according to Dusty. But that little doll grew up and stopped listening to her mother, then she she found herself pregnant at 17. There is no mention made of Infinity's father, so presumably he wanted nothing to do with the baby (or maybe he didn't even know about it). But Dina thought she could run away and raise the baby on her own. Dusty thought otherwise.

"That's when I made some mistakes. I just couldn't let her ruin her life and Infinity's by leavin'. She needed a reason to stay and I gave it to her," says Dusty in a voice over, as we see in a flashback that she started putting lead paint chips into her daughter's food. 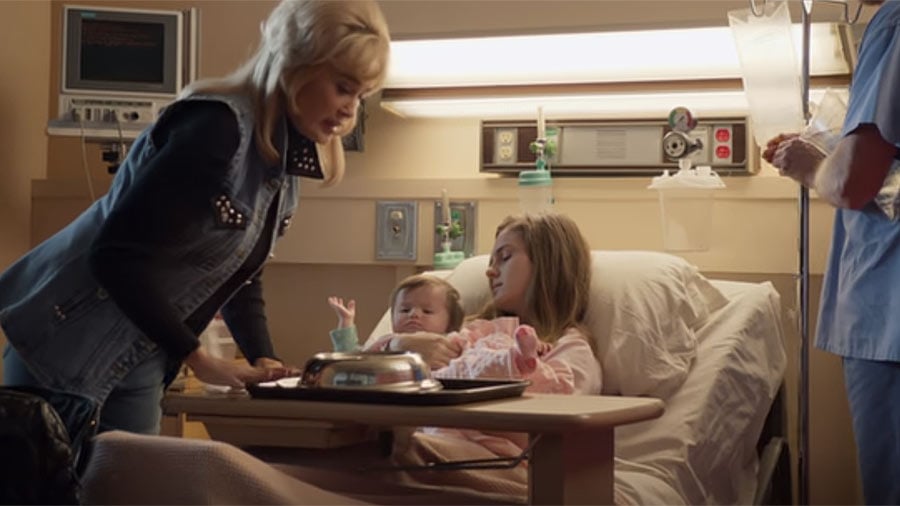 "After she got sick, we were so close again. All the yellin' and fightin', that was over. We were a family again. Her death . . . her death was tragic, there's no way around that. I was devastated," says Dusty, tearing up. She really puts on quite the performance. She later says that Dina's death was an accident, that she thought the hospital would save her. But that also rings a bit false.

Anyway, Dusty says that after Dina's death, suddenly she was Infinity's guardian, and it's like she got a do-over with her baby girl — but this time she wasn't going to let her baby leave, meaning she needed to keep Infinity sick all the time.

Related:
Netflix's New Show The Politician Is Pretty Cutthroat, but the Cast Is Cutesy as Hell

"If. I'm saying if I done that," says Dusty. "Besides, we just got so much free stuff."

It's a story worthy of Gypsy Rose Blanchard and her mother, Dee Dee, which is not an exact inspiration for this situation, but it's darn close. Fortunately, in this situation, Infinity figures out what's going on and leaves her nana, but doesn't have her boyfriend stab her nana to death and end up in prison like with the real-life Blanchard situation.

Instead, Dusty gets her comeuppance in the form of Ricardo telling the police everything about her murder of Dina and her attempted murder of Infinity. It's a satisfying ending without more violence and death.