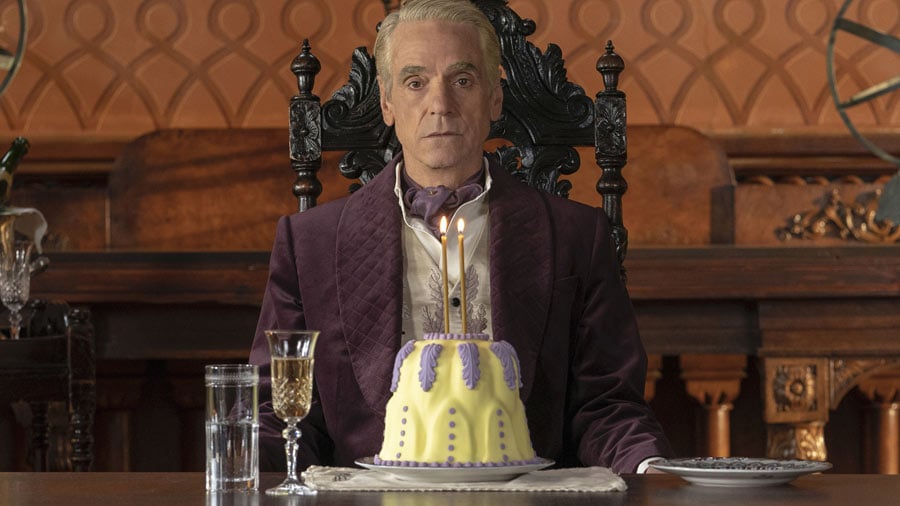 The majority of the action in the Watchmen premiere takes place in Tulsa, OK, with a group of white supremacists going after local law enforcement and the masked vigilantes who fight alongside the police. However, there is a scene toward the end of the episode with Jeremy Irons, which takes viewers completely out of the action but undoubtedly has some serious implications on the plot moving forward. Read on to find out what we know about who Jeremy Irons is playing — probably Ozymandias — and what his connection is to Dr. Manhattan. Warning: spoilers from the premiere episode ahead!

Related:
Watchmen: The Tulsa Race Massacre Is a Horrific Piece of Real-Life History

At one point early on in the premiere, there is a brief shot of a newspaper headline that reads, "Veidt Officially Declared Dead." This is a reference to the Watchmen of the comics and the 2009 film. Adrian Veidt (played by Matthew Goode in the film) is a wealthy genius who fights crime for a while as a costumed vigilante named Ozymandias. However, as vigilantes become more and more maligned by the media and the public, he decides to retire and orchestrate a catastrophic event that will purportedly unite humanity against a common enemy.

In the Watchmen film, fellow vigilantes Rorschach (Jackie Earle Haley) and Nite Owl (Patrick Wilson) discover not only Veidt's plan to convince the world they are under an extraterrestrial attack, but also that he has framed Dr. Manhattan (Billy Crudup) and gotten the doctor to flee Earth thinking he caused cancer in his lover and coworkers. By the end of the movie, the superheroes decide not to reveal Veidt's thwarted plan, but unbeknownst to them, Rorschach has mailed Veidt's plan to a newspaper. Viewers do not know if the newspaper ever publishes it. 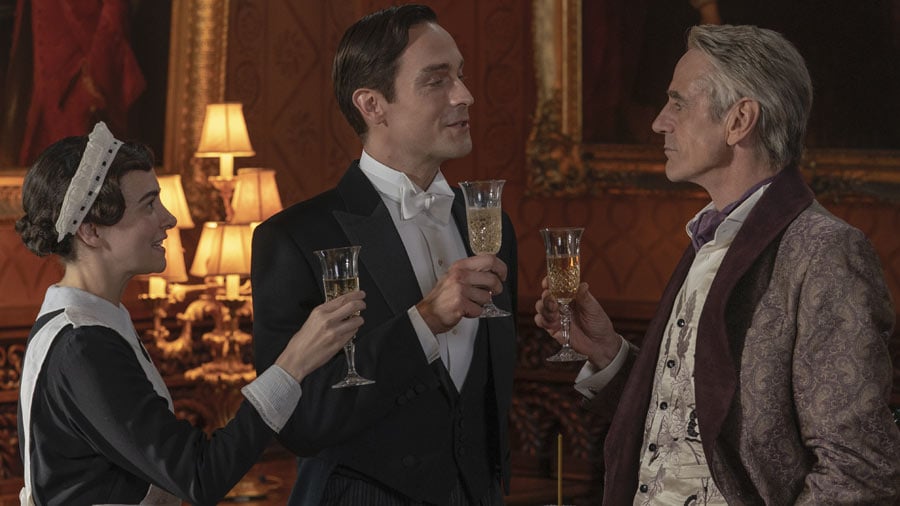 When the show picks up, a presumed-dead Veidt is living in an English country estate. He has "servants" who work for him, played by Sara Vickers and Tom Mison, but there's something off about them. Mr. Phillips (Mison) tries to hand him a horseshoe to cut a cake, for example. Are they robots or androids of some kind? Also, Phillips gifts Veidt a pocket watch and Veidt tells them he's writing a play called The Watchmaker's Son and he wants his servants to star in it.

Here's where things get interesting: Dr. Manhattan is actually a watchmaker's son and Veidt has always been kind of obsessed with him. So what exactly is Veidt up to with his Dr. Manhattan obsession? The premiere includes a quick look at a TV newscast, where Manhattan can be seen destroying some kind of structure on Mars. Is he trying to get Manhattan to return to Earth, perhaps? And if, in the movie, Veidt wanted humans to think they were under attack by extraterrestrials, does that have anything to do with the alien squid that periodically fall from the sky?

One thing we do know is that at the end of the Watchmen trailer, released at the San Diego Comic-Con in July, a blue hand is shown picking up a blue mask off the street. As movie and comics fans know, Dr. Manhattan has been bright blue ever since a laboratory accident that exploded his entire body. It ultimately reformed itself, but he's been glowing bright blue ever since.

What does it all mean? It seems like perhaps we're in for a Veidt–Manhattan showdown at some point.