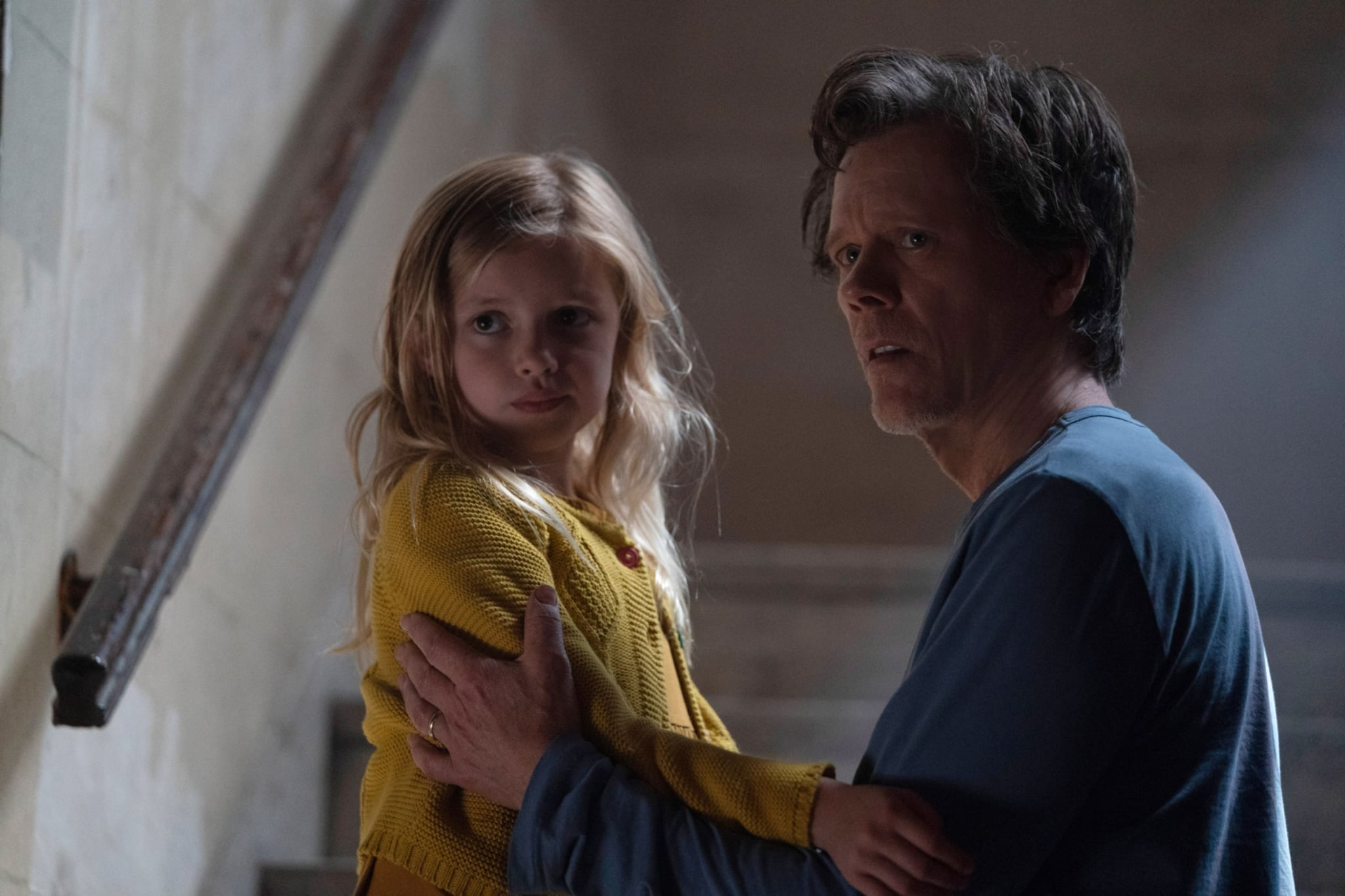 Horror film You Should Have Left, starring Kevin Bacon and Amanda Seyfried, tells the story of a romantically struggling couple who escape to a house in the Welsh countryside with their daughter for some rest and relaxation, but things start to get weird when the house takes on a haunting feel and random messages begin popping up. If you're a little too afraid to watch this thriller without knowing more about the story, keep reading for a bunch of spoilers.

Related:
There's a Terrifying Amount of Horror Movies Coming Out in 2020, So Get Ready to Scream

Susanna (Seyfried) is Theo's (Bacon) second wife. His first drowned in the bathtub years ago, and Theo was accused of being responsible. He ended up in court but the case was dismissed, though some people still believed he was at fault. Fast-forward a few years and he meets and marries Susanna, who is several years his junior. They have a daughter, Ella (Avery Essex), who wonders why people hate her dad and if he'll die before her mom because he's so much older.

Susanna and Theo are experiencing a little bit of turmoil in their relationship — which turns out to be because Susanna is most likely cheating — coupled with Theo still dealing with ramifications of his previous wife's death. They decide to rent a house in Wales to spend quality time together as a family.

Right off the bat, the house is creepy and impersonal, but it's chalked up to it being a rental. Soon, though, Theo finds messages written in his journal — one saying "Leave. You should leave. Go now." — Ella sees shadows, and Theo sees stairs down to a basement in a dream. Time also takes on a mythical quality in the house. When Theo goes to turn off the lights at 10:35 p.m., he thinks he's only gone for a few minutes, but it's actually been five hours.

The family decides they're going to leave the house, because they all hate it and are terrified — plus Theo finds another note in his journal telling him it's too late — but then Theo finds out about Susanna's cheating. Theo makes her leave but keeps Ella with him in the house. This is when things get really odd. The two of them discover that the dimensions of the house don't make any sense when they measure it from the outside. When Ella runs back inside to get her coat, she disappears into the magical maze that is the house. Theo runs after her and after ending up in the creepy basement again, the two pull out of the time and space vortex and end up back together.

Related:
16 Underrated Horror Movies on Netflix That Will Leave You Sleeping With the Light On

Theo tries to call Susanna to come back and pick them up — because she took the car — but he can't get ahold of her. Then Theo tries calling a shop owner in town who commented on the strangeness of the house when Theo picked up groceries. The shop owner tells Theo, though, that he can't do anything to help and he's at the mercy of the house, which was built by the devil.

Theo and Ella set out to walk to town, but just when they think they've made it, they realize they're right back at the house. They can't escape. Theo promises Ella that he'll protect her through the night and they'll leave in the morning.

During the night, Theo ends up back in the basement where there is a tub and seemingly his ex wife dead in it, haunting him. A man, whom Theo assumes is the owner of the house, taunts him about what he's done and how the house claims those who deserve to be claimed, and Theo realizes the man is actually another version of himself, telling him he can't leave and that he's doomed to be trapped there.

Theo sees flashes of the past days at the house and realizes he's been the one writing in his journal from a different dimension, warning himself to get out but knowing he won't. He sees glimpses of his family in the house and the weirdness they've been experiencing, and he soon realizes he'll never leave.

The next morning, Susanna comes back and Theo puts Ella in the car to leave with her. He then confesses to Susanna about letting his wife die in the bathtub all those years ago. He said he'd been unhappy in their marriage and rather than getting her out of the tub, he stood idly by and watched her die. It's for this reason that he needs to stay at the mysterious house in Wales and become a prisoner to the devil.

So, What Does the House Mean?

We can only assume the house is a form of purgatory or hell for those who have done wrong and need to atone but haven't yet. Because Theo is responsible for his wife's death and evaded punishment, the house sought him out and lured him in. The house never wanted Susanna or Ella but it used them to get Theo there and ultimately let them go. Theo – like other sinners who occupied the house before him — are trapped to pay for what they've done.