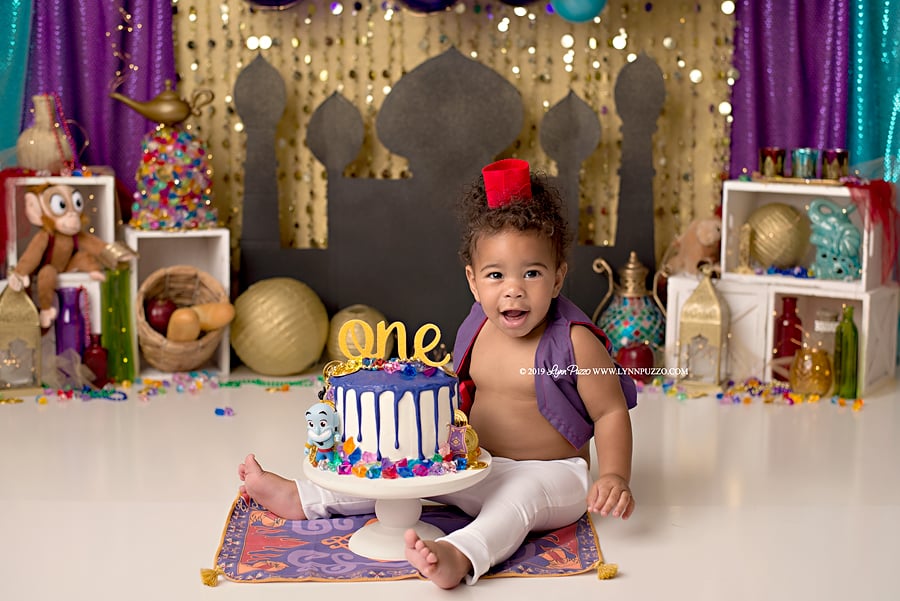 Photographer Lynn Puzzo, a long-time Disney-lover from Fayetteville, GA, is taking her obsession to new heights in the form of an Aladdin-themed cake smash so cute, we have a feeling it'd earn Jafar's stamp of approval. After mulling over doing a Lion King theme, Lynn and her client, Ana Avant, opted to dress up Ana's 1-year-old son Jett up as the prince of Agrabah instead.

"The live-action Aladdin movie was just coming out, and as soon as she mentioned it, it basically consumed my thoughts until I did the session!" Lynn told POPSUGAR. "I made sure to see the movie in theaters, of course, to brush up on details. I also made a lot of the set myself and tried to keep it as representative of the movie as much as I could. It was important to reference the film, and keep it as authentic as possible while creating a baby-friendly set."

Although Jett wasn't especially interested in destroying the dessert — who can blame him? It's beautiful! — he took a major interest in the spatula beside him. Keep reading to get a look at this incredible cake smash photo shoot that involves both a tiny fez and a full-on magic carpet!

Related:
This Little Girl Had a Starbucks Cake Smash, and We See Frappuccinos in Her Future!
Previous Next Start Slideshow
BabiesPhotographyAladdin

KJ Apa
KJ Apa and Clara Berry Are Officially Parents, and Their Baby Boy's Name Is Lovely
by Chanel Vargas 1 day ago