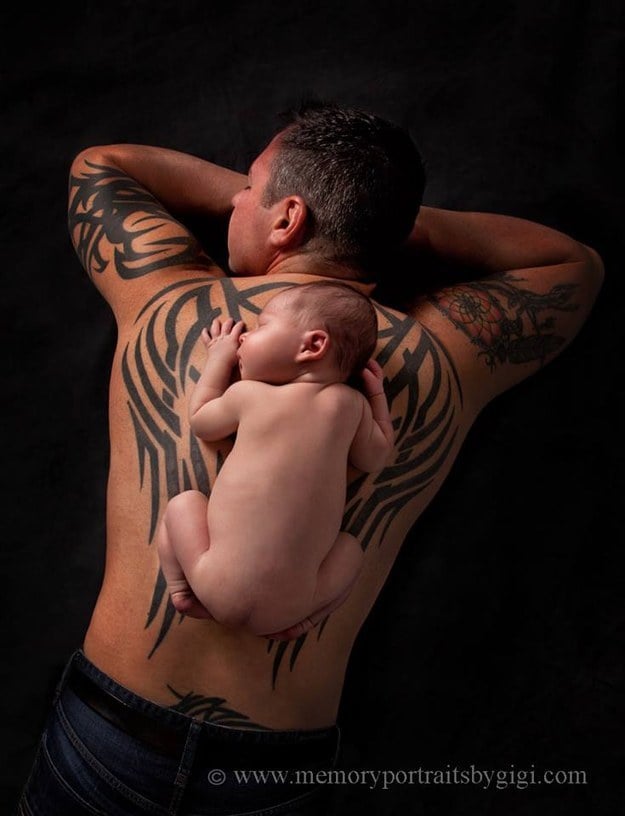 How 1 Newborn Totally Sabotaged His Dad During a Photo Shoot

Asher Resnik was just a week old when he decided it was the perfect time to become a viral sensation — by pooping on his dad's back during a newborn shoot.

The photographer, Gigi O'Dea, told us, "This image was particularly important to [the parents] as they really wanted a special image where they could showcase baby Asher with the dad's wing tattoo on his back. They were very committed to making it happen, obviously at any cost."

While the above image is the shot that they ultimately wanted, the photo below was the star of the bunch for sure. Asher's dad, Mark, posted the photo to Facebook, "During his photo shoot at seven days old, my son puked on me, peed on me and pooped on me twice. I love this life already." What a good sport.

"Asher was probably the happiest baby that I have ever photographed. I was able to capture 34 smiling images of him in his newborn session, which is unheard of! Obviously, he got the last laugh!" O'Dea told us.

Read through to see some other photos from the shoot of this particularly happy baby, and have a little giggle at this new dad's welcome into parenthood.

Previous Next Start Slideshow
Parenting HumorPhotographyNewbornHumor
Around The Web

Friendship
Friends Are Doing PowerPoint Nights to Present Hot Takes to Each Other, and It Looks So Fun
by Ashley Broadwater 2 days ago

Mandy Moore
Mandy Moore Is a Mama! Meet Her and Taylor Goldsmith's Son, August
by Alessia Santoro 5 days ago

Little Kids
This Mom's Empty Plate Prank Backfires on Her Toddler — Have You Ever Met a More Polite Kid?
by Yerin Kim 5 days ago