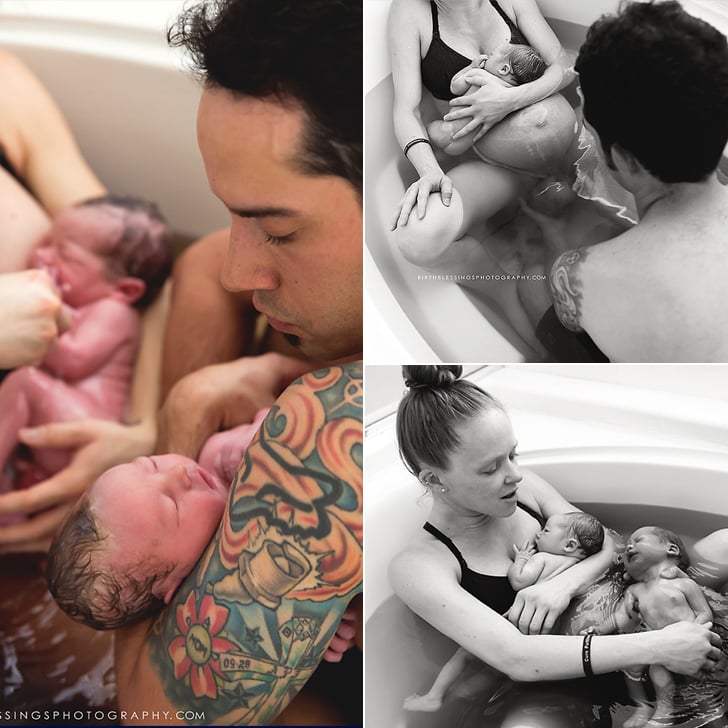 One couple not only had a peaceful home water birth experience, but they were also lucky enough to have a talented birth photographer on hand to capture each breathtaking moment.

While it's estimated that 75 percent of twin births in the United States are delivered via C-section, this couple decided to welcome their babies at home — and the process moved so quickly that their ob-gyn wasn't able to arrive in time. In the stunning series of photos taken by Birth Blessings Photography & Childbirth Services, Robin Baker managed not only to photograph this twin birth but also to assist in it.

Baker told POPSUGAR that she arrived only 20 minutes after initially receiving the couple's call but could immediately tell that it wasn't going to be a long labor. "In between contractions and taking photographs, I was focused on helping them prepare a space to birth," said Baker. "I'm also an experienced home birther, so I knew what needed to be done."

As soon as Baker warmed the water and the laboring mom got into the bathtub, she immediately had the urge to push. Since everything was happening so quickly, Baker and the daddy-to-be spoke with their doctor over the phone to update him on their progress. The unnamed father joined his wife in the bathtub and helped to deliver their twins, a baby boy and girl.

They joyful couple had 30 minutes of bonding time with baby A before baby B made his way into his father's hands while still en caul. "The mom reached down and removed the [amniotic] sac and dad turned the baby to release the Nuchal cord and then handed him to mom," described Baker. "The parents were calm, peaceful, and brought their babies into the world effortlessly!"

Even though Baker has witnessed more than 70 births, she said that this was one of the most incredible moments of her career. "Since so many twins are born in the operating room, this birth was very special," added Baker. "Women are incredible when they follow their body's natural instincts!"
This post was originally published on March 15, 2016.