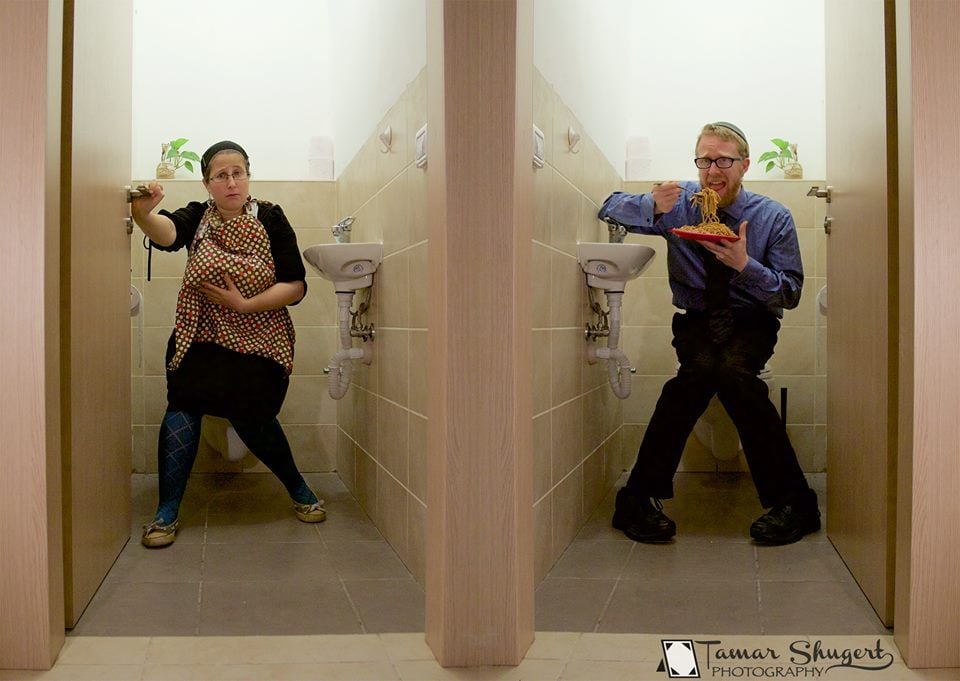 Breastfeeding photos have generated their fair share of media coverage over the past year as more and more moms try to make the act of public nursing more mainstream. We've seen Olivia Wilde feeding baby Otis on the pages of Glamour and everyone from Gwen Stefani to Alyssa Milano sharing their breastfeeding selfies with their Instagram fans. But there's one photo that seems to have everyone talking today — a side-by-side photo collage of a woman nursing her baby in a bathroom stall and a man eating a plate of pasta in the stall.

The photo was taken by Israeli photographer and mom-of-two Tamar Shugert (the man in the second shot is her husband), who spotted a contest on the Facebook photography page 52Frames. As soon as she saw the "Make a Statement" photo challenge, she knew what she wanted to do.

"While I've never personally been asked to 'go to the bathroom' to breastfeed — not that I would if I was asked — I have heard from friends of mine that this has happened to them," Shugert told Yahoo Parenting. "And seeing how I am pregnant, I guess this topic is on my mind."

She submitted the photo, captioning it in part, "My baby eating is not a gross side-effect of having children. If you are not willing to eat your lunch in the bathroom, then don't expect me to feed my kid there!" The photo won the Audience Award in the contest and is sparking discussion around the world — but not necessarily for what you'd think!

"People took offense to the fact that I was wearing a nursing cover," Shugert says. "I don't ever want to be inconvenienced by being asked to leave a place to go nurse, but I don't want to inconvenience others by showing them a body part that's usually covered. Some of the commenters were saying that breasts shouldn't be sexual. But I believe that breasts have a dual purpose, and that they are sexual. In my culture — Orthodox Judaism — sexuality is used as a powerful force within marriages and not something to be shown to everybody."

Regardless of what she's wearing in the photo, it's the message that Shugert is trying to convey that should be noticed. Similar to an ad campaign last year, breastfeeding moms are hoping to come out of the bathroom and feel more comfortable feeding their babies in public.