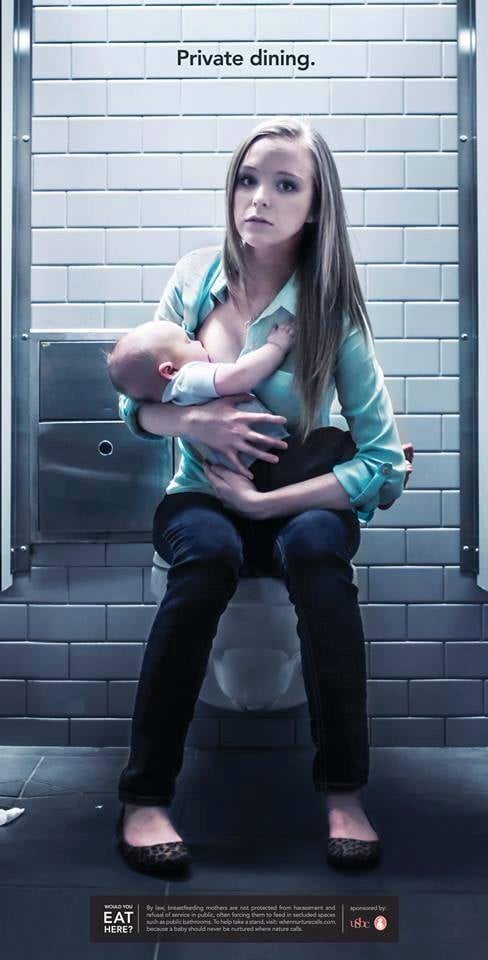 For one of the most natural things you can do, it's unbelievable how controversial breastfeeding seems to be. And when moms try to feed their babies in public, the claws really come out! So it is no surprise that nursing advocates are striking back.

The state of Texas is considering bill HB1706, which would protect breastfeeding moms from harassment, so when two graphic design students at the University of North Texas were given an assignment to "complete a project as if they were working for real clients" they designed an ad campaign supporting the passage of the bill. The campaign features three ads, including one with 21-year-old Monica Young nursing her baby in a public bathroom stall with the words "Private dining" printed above her. The body copy for all three ads reads:

"Would you eat here? By law, breastfeeding mothers are not protected from harassment and refusal of service in public, often forcing them to feed in secluded spaces such as public bathrooms. To help take a stand, visit whennurturcalls.com, because a baby should never be nurtured where nature calls."

The duo researched La Leche League, the U.S. Breastfeeding Committee, and Borden before creating the ads and made them part of a larger plan that would also include a website and app showing women where they could comfortably nurse. But though the campaign is only a classroom project, the designers and the star of one of their ads are running into a few bumps in the road. Critics are blasting the images (and the bill) for encouraging "public nudity" and, at it's worst, teen pregnancy. Comments on Facebook posts about the campaign are turning into virtual brawls leading Young to write:

"My point in participating in this ad wasn't just for the legislation, but to shed light on a problem that most people don't even realize is an actual problem. And just because you've never been harassed while NIP [nursing in public] doesn't mean that it doesn't happen. Nursing your child in a bathroom, car, anywhere but where he mother is comfortable for fear of anything is a problem . . .

"Whether I was a too young or not, what does it matter what age I am? Teen moms breastfeed, too. I'm 21, so yeah I'm pretty young, and younger mothers are less likely to breastfeed. So hopefully it will encourage younger mothers to breastfeed, breastfeed in public and to not be ashamed to do any of it. (Plus I think my expression and the colors used in the ads depict how I feel about nursing in a bathroom, but that's just my opinion)"