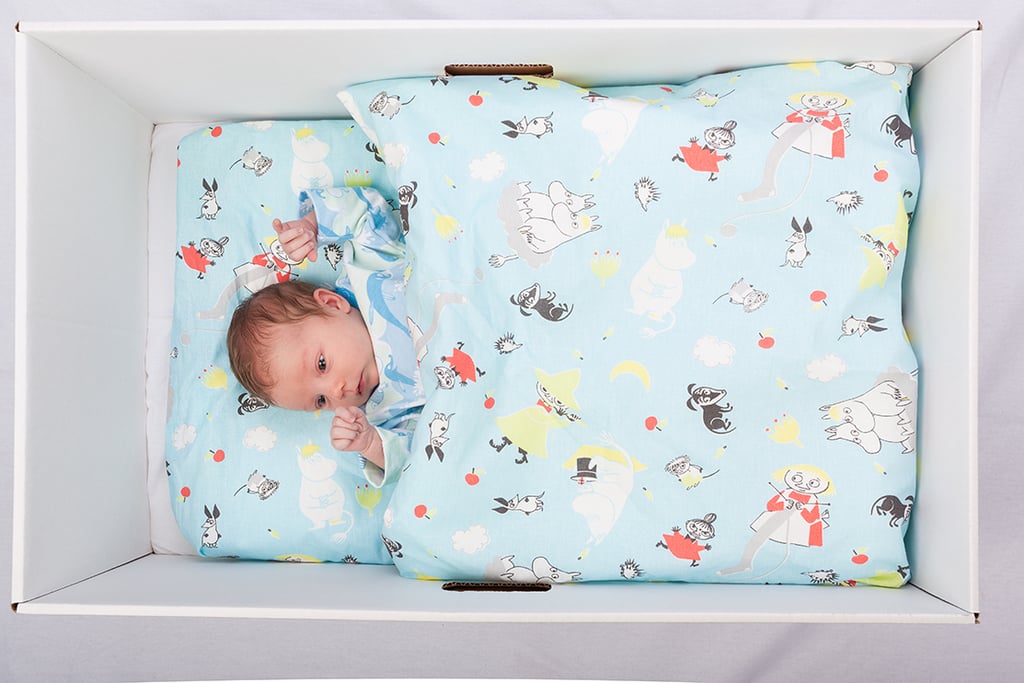 The Surprising Reason Babies Everywhere Are Sleeping in Cardboard Boxes

It almost seems too simple to work, but for more than 75 years, Finland's government has provided all expectant moms — regardless of their economic status — with a maternity box filled with a selection of clothes, bedding, and products used in the first few months of a baby's life. And the government there says the box is the reason Finland has one of the world's lowest infant mortality rates — 3.4 deaths per 1,000 births — half the rate in the United States.

In addition to baby's layette and some bath products, the box comes with a small mattress that is placed in the bottom of the box to create baby's first bed. To get the box, all expectant parents need to do is attend a a prenatal appointment prior to their fourth month of pregnancy.

Although the box had been around for more than half a century, news of its existence spread a few years ago and a number of copycat boxes began cropping up — some government or charity-issued, and some for sale by entrepreneurial companies.

In South Asia, for example, the Barakat Bundle was created by a Harvard University doctoral student. Karima Ladhani developed the low-cost box to include a clean-birth kit that helps prevent infections during childbirth, a thermal kit, and a mosquito net to ward off malaria. "We wanted to provide low-cost life-saving solutions to new mothers — specifically targeted to causes of preventable infant and maternal mortality," Ladhani told the BBC. The box also includes health and hygiene information, as well as newborn essentials — including a safe place for the baby to sleep. In order to receive the box, mothers must attend a prenatal checkup.

Here in the US, Jennifer Clary and Michelle Vick were taken with the story of the Finnish baby boxes and set out to create a version that American parents could buy for themselves. The result is The Baby Box Company, a for-profit company that sells several different boxes that provide a safe sleeping environment for babies up to 8 months old. Depending on the box you buy, it can be simple with just the box, a mattress, a waterproof cover, and a sheet ($69) to luxurious with onesies, socks, bibs, sleep sacks, organic bath products, and more ($199). The company also works with government agencies and hospitals to distribute their for free.

And lest anyone think the folks in Finland are just watching other countries copy one of their signature products, Anssi Okkonen, Heikki Tiittanen, and Anton Danielsen — three dads who were impressed with the contents of the boxes they received for free from their government — have created the Finnish Baby Box that ships copies of the government-issued boxes to expectant parents around the world for approximately $450.

Read on to see what the boxes look like around the world.