Although it's not every day that we catch a glimpse of a cat hanging out with a chicken, desperate times call for desperate measures. In a Facebook post, firefighters from the Grass Valley Fire Department explained that they came across the two most unlikely of friends after a deadly wildfire broke out in California. Known as the the Carr Fire, the blaze has taken the lives of six people and has been dubbed one of the most dangerous fires in the state's history. Fortunately, this cat and chicken found each other and looked to one another for comfort and safety — giving us some much-needed hope to cling to.

"While conducting their mission, the Grass Valley crews came upon an unlikely pair of animals impacted by the fire," said the post. "In the doorway of a home, they found a cat and a chicken huddled together for safety and support. The animals had survived one of the most destructive fires in memory, finding comfort in each other in the doorway of a home."

Related:
These Photos of Cats With Their Tiny Humans Prove Dogs Have Nothing on Felines

And it's no surprise the pair turned to each other for support — they both had substantial burns, according to the fire department.

"The cat and the chicken each had burns that would require treatment. Grass Valley firefighters found a dish and provided the two newfound friends with fresh water as other firefighters searched for a way to contain the pair for the SPCA; they were able to find an animal carrier."

Fortunately, the fire department was able to locate the cat's owner, Jennie Sierra, who told Today that her cat's name was Whiskers. Niko Kuyper then stepped up to claim his chicken as soon as a neighbor alerted him to the photos floating around the internet.

"We were kind of shocked to see what looked like our chicken in these news reports," said Niko. "We have six chickens, but this one has a bit of a personality; she's a bit feistier, so we think that probably helped her through all this."

Family Life
When a Zoom Call Wouldn't Cut It, This Caravan of Cars Gave a Boy the Sweetest "Birthday Parade"
by Kate Schweitzer 18 hours ago 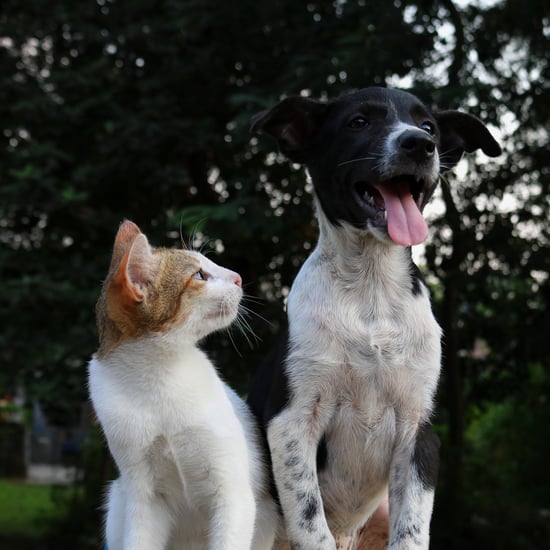 Cats
During This Self-Isolation Period, I'm Grateful Now More Than Ever For My Pets
by Murphy Moroney 2 days ago