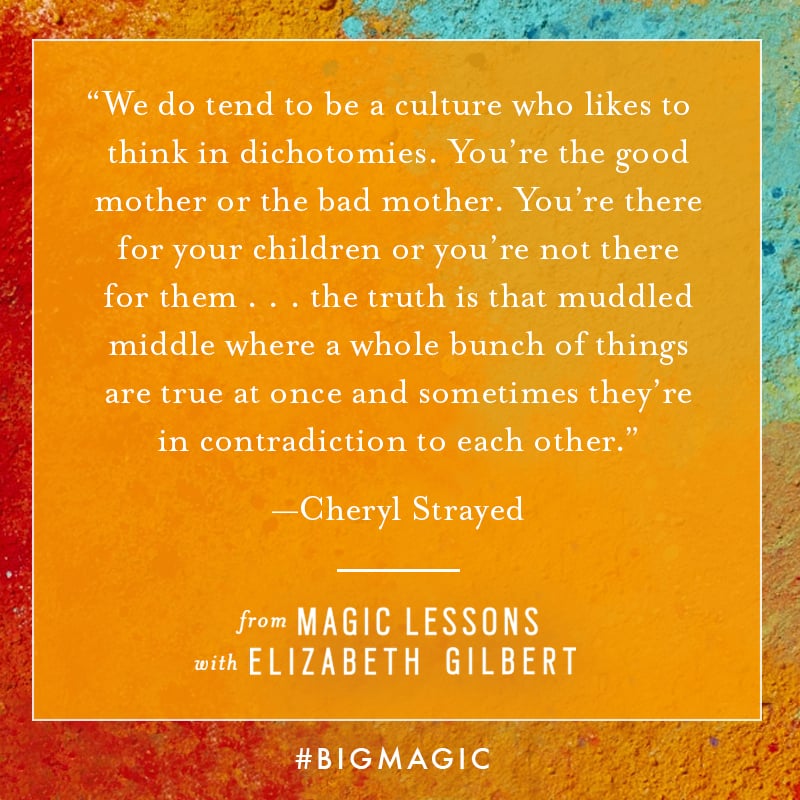 Having a child changes your life in a million ways, but continuing to pursue your passions and try new things shouldn't be something you give up just because you're a mother. Cheryl Strayed, New York Times bestselling author of Wild, appeared as a guest on the second episode of Elizabeth Gilbert's new podcast, Magic Lessons, and had some priceless advice for mothers who want to aspire to be defined as something more than "just a mother."

1. There's nothing wrong with being "good enough."

Nobody is perfect, and nobody can do it all, so Cheryl says she would love to see the way we work and the way we parent redefined. Rather than focus on being the best mom in the world, focus on being the best mother for your children, which includes doing things for yourself and making sure that you're happy and fulfilled. The important questions she poses — "Were you there? Did you love them well? Did they know it? Did you fix it when you f*cked up?" — are what she urges mothers to think about moving forward, rather than, "Am I a good mother or a bad mother?"

"We do tend to be a culture who likes to think in dichotomies. You're the good mother or the bad mother. You're there for your children or you're not there for them . . . And the truth is that muddled middle where a whole bunch of things are true at once and sometimes they're in contradiction to each other."

2. Set an example for your children by pursuing your passions.

When Cheryl became a mother, she had to learn how to honor both her life as a writer and her life as a mother — she didn't want to have to choose just one. She knew that she needed to have some time away from her family to focus on finishing her memoir, Wild, and feared that she would be doing her kids harm by leaving them for three weeks while she worked, but as soon as she got back, they were overjoyed to see her, and within 10 minutes, it was as if she had never been gone. It was a hard choice for her to make, but her career is thriving because of it, which she says is not something that a parent should have to feel guilty about.

"One of the greatest gifts I've given my children is the example of a mother who pursues her passions like a motherf*cker."

Maybe your passion is to write a book, like Cheryl or Liz, or maybe it's to be a marathon runner. Whatever it is that scares you, whether it's because you don't want to leave your children in the dust while you go for it, or because you feel like now that you're a mom you shouldn't even want to do things for yourself, you have to let the fear go as best you can and just try. You will likely not regret having tried, whether it works out for the best or not. The best we can do is love our children along the way and remind ourselves of that constantly.

"The best things are a little scary — or maybe a lot scary."

Magic Lessons is inspired by Liz's new book, BIG MAGIC, coming in September, and new episodes are available every Wednesday. The second episode — "Pursue Your Passions Like a Mofo" — featuring Cheryl Strayed is available to listen to and download now on Soundcloud, iTunes, and Stitcher.

Father's Day
My Dad Taught Me to Find Value in Every Experience, and It Changed My Life
by Kaley Rohlinger 1 hour ago 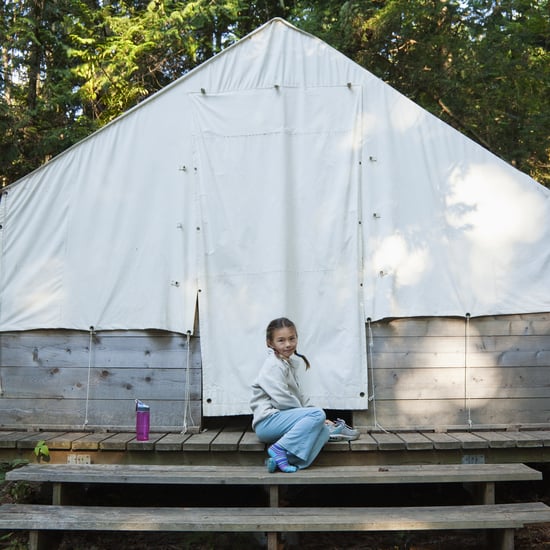 Family Life
Summer Camps May Go On, but They'll Look Different — What Parents Need to Know
by Leah Campbell 2 hours ago

Little Kids
Struggling With Naps and Bedtime? This Expert's Sleep-Regression Tips Can Help
by Murphy Moroney 2 days ago

Family Life
Sleep-Training Your Child Amid COVID-19 Will Lead to More Rest For Parents and Baby, Says an Expert
by Murphy Moroney 3 days ago